The coins of India’s Gupta period reflect the people and beliefs of the era. They show ancient rulers, gods and goddesses, and symbols. Their weight and composition even give evidence of trade with other ancient civilizations.

Peaceful coexistence of diverse ethnic, religious, and linguistic groups has historically been a hallmark of South Asian cultures. For this reason, many have referred to the region as a “salad bowl” of culture: a hodgepodge of different peoples, beliefs, and behaviors.

In South Asia — which includes the land that makes up the modern-day nations of India, Pakistan, Bangladesh, Bhutan, Nepal, and Sri Lanka — colorful distinctions are apparent and even celebrated. 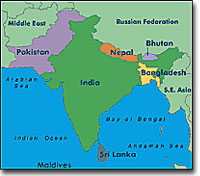 When India crashed into Asia 50 million years ago, the collision created the Himalayan Mountains and made India a subcontinent.

Under the layers of diversity lies a solid core of South Asian tradition. Traditions have endured for over 5,000 years — from the earliest known Indian civilization to the present day.

The Indus Valley civilization dates back to about 3000 B.C.E. The archaeological evidence from this period provides exemplary evidence that many aspects of South Asian culture have endured through changing times.

Remnants of ancient bathhouses and sophisticated sanitation systems point to the long history of South Asian culture — admiration of purity and cleanliness, and abhorrence of all things polluted. Ancient statues representing the god Shiva are proof that the religious traditions of today’s South Asia, too, have been around for millennia.

The Soul of South Asia

To understand the history and cultures of ancient South Asia, it is essential to consider the development of Hinduism and Buddhism. These two religions encompassed far more than spirituality. They became the lifeblood of the people and the backbone of social, political, and economic structures. These religions pervaded all aspects of life and shaped the evolution of the region. 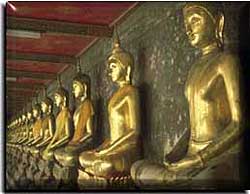 The ancient Indians built religious monuments dedicated to many faiths. Many are visited by pilgrims today, such as this Buddhist temple in Nalanda.

Some have called Hinduism the “soul of India.” One of the most powerful and influential developments of ancient Hinduism was the institution of the caste system. The caste system became deeply incorporated into Hindu tradition and created an enduring framework of ascribed social status.

Buddhism emerged as a rejection of the injustices created by caste system sanctioned by Hinduism. It was a response to discontentment and a search for new answers to the mysterious and complex questions that define human experience.

Organized power structures arose from the conflict and confusion that followed the growth of new religions and the challenging of social structures. These power structures led to the formation of state systems and even triggered the development of vast empires.

Few regions in the world have histories as ancient and diverse as South Asia’s. And few people realize that South Asia’s roots can be traced to the beginnings of human civilization. Marked by integration, intellectualism, and spirituality, South Asia’s ancient history begs to be explored.