8a. Early Civilization in the Indus Valley

8a. Early Civilization in the Indus Valley 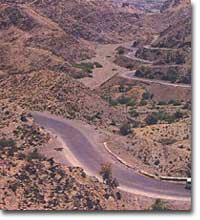 Aryans probably used the Khyber Pass to cross the mountains during their Indian invasion. Located in present day Pakistan, the pass is about 16 yards wide at its narrowest point.

The phrase “early civilizations” usually conjures up images of Egypt and Mesopotamia, and their pyramids, mummies, and golden tombs.

But in the 1920s, a huge discovery in South Asia proved that Egypt and Mesopotamia were not the only “early civilizations.” In the vast Indus River plains (located in what is today Pakistan and western India), under layers of land and mounds of dirt, archaeologists discovered the remains of a 4,600 year-old city. A thriving, urban civilization had existed at the same time as Egyptian and Mesopotamian states — in an area twice each of their sizes.

The people of this Indus Valley civilization did not build massive monuments like their contemporaries, nor did they bury riches among their dead in golden tombs. There were no mummies, no emperors, and no violent wars or bloody battles in their territory.

Remarkably, the lack of all these is what makes the Indus Valley civilization so exciting and unique. While others civilizations were devoting huge amounts of time and resources to the rich, the supernatural, and the dead, Indus Valley inhabitants were taking a practical approach to supporting the common, secular, living people. Sure, they believed in an afterlife and employed a system of social divisions. But they also believed resources were more valuable in circulation among the living than on display or buried underground. 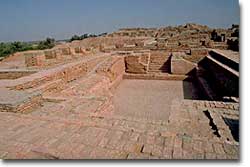 The “Great Bath” of Mohenjo-Daro is the earliest known public water tank of the ancient world. Most scholars believe that this tank would have been used in conjunction with religious ceremonies.

Amazingly, the Indus Valley civilization appears to have been a peaceful one. Very few weapons have been found and no evidence of an army has been discovered.

Excavated human bones reveal no signs of violence, and building remains show no indication of battle. All evidence points to a preference for peace and success in achieving it.

So how did such a practical and peaceful civilization become so successful? 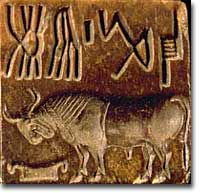 Seals such as these were used by merchants in the Harappan civilization. Many experts believe that they signified names.

The ruins of two ancient cities, Harappa and Mohenjo-Daro (both in modern-day Pakistan), and the remnants of many other settlements, have revealed great clues to this mystery. Harappa was, in fact, such a rich discovery that the Indus Valley Civilization is also called the Harappan civilization.

The first artifact uncovered in Harappa was a unique stone seal carved with a unicorn and an inscription. Similar seals with different animal symbols and writings have since been found throughout the region. Although the writing has not yet been deciphered, the evidence suggests they belonged to the same language system. Apparently, Mesopotamia’s cuneiform system had some competition in the race for the world’s first script.

The discovery of the seals prompted archaeologists to dig further. Amazing urban architecture was soon uncovered across the valley and into the western plains. The findings clearly show that Harappan societies were well organized and very sanitary.

This copy of the Rig Veda was written after the Vedic Age. The Aryans had no form of writing at the time they invaded India. Instead, these religious scripts would have been memorized and passed down orally by Brahman priests.

For protection from seasonal floods and polluted waters, the settlements were built on giant platforms and elevated grounds. Upon these foundations, networks of streets were laid out in neat patterns of straight lines and right angles. The buildings along the roads were all constructed of bricks that were uniform in size.

The brick houses of all city dwellers were equipped with bathing areas supplied with water from neighborhood wells. Sophisticated drainage systems throughout the city carried dirty water and sewage outside of living spaces. Even the smallest houses on the edges of the towns were connected to the systems — cleanliness was obviously of utmost importance.

The Fall of Harappan Culture

No doubt, these cities were engineering masterpieces of their time. The remains of their walls yield clues about the culture that thrived in the Indus Valley. Clay figurines of goddesses, for example, are proof that religion was important. Toys and games show that even in 3000 B.C.E., kids — and maybe even adults — liked to play. Pottery, textiles, and beads are evidence of skilled craftsmanship and thriving trade. 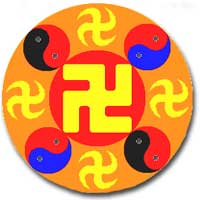 The swastika was a sacred symbol for the Aryans signifying prosperity. The word comes from the Sanskrit for “good fortune.” Hitler borrowed the symbol, changed the angle and direction of the arms, and used it to represent the Nazis.

It was this intensive devotion to craftsmanship and trade that allowed the Harappan culture to spread widely and prosper greatly. Each time goods were traded or neighbors entered the gates of the cities to barter, Indus culture was spread.

Eventually, though, around 1900 B.C.E, this prosperity came to an end. The integrated cultural network collapsed, and the civilization became fragmented into smaller regional cultures. Trade, writing, and seals all but disappeared from the area.

Many believe that the decline of the Harappan civilization was a result of Aryan invasions from the north. This theory seems logical because the Aryans came to power in the Ganges Valley shortly after the Indus demise of the Indus Valley Civilization. Because there is little evidence of any type of invasion though, numerous historians claim that it was an environmental disaster that led to the civilization’s demise. They argue that changing river patterns disrupted the farming and trading systems and eventually led to irreparable flooding.

Although the intricate details of the early Indus Valley culture might never be fully known, many pieces of the ancient puzzle have been discovered. The remains of the Indus Valley cities continue to be unearthed and interpreted today. With each new artifact, the history of early Indian civilization is strengthened and the legacy of this ingenious and diverse metropolis is made richer.