8c. The Rise of Hinduism

8c. The Rise of Hinduism 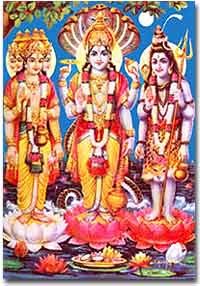 Each of the three main Hindu deities represents a part of the life cycle: Brahma the creator, Vishnu the preserver, and Shiva the destroyer. Upon destruction, Hindus believe that the cycle of creation, preservation, and destruction begins again.

Not many things have endured without interruption or major transformation for over 5,000 years. Hindu traditions such as these are great exceptions. Arguably, Hinduism is the oldest religion on Earth.

Archaeologists have determined that highly developed civilizations flourished throughout the Indus Valley between 4000 and 1500 B.C.E. But for still unknown reasons, the valley’s inhabitants appear to have moved out rather suddenly. They resettled among new neighbors in northwestern India and encountered a group of people from central Asia who brought with them warrior ethics and a religion called Vedism.

Within the ruins of the ancient Indus Valley civilization, archaeologists have discovered many artifacts of modern Hinduism that were not found in any Vedic civilizations. These include statues and amulets of gods and goddesses, huge temple tanks for bathing, and sculptures of people in yoga postures.

Based on this evidence, it seems that when the people from central Asia settled in India, their Vedic beliefs were mingled with the beliefs of indigenous Indians. Thus, it is likely that the Indus Valley tradition and Vedic gods and beliefs combined to form the foundations of Hinduism. 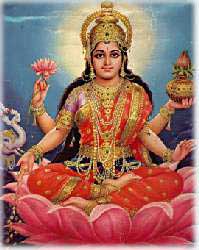 There is a trinity for Hindu goddesses as well as for gods. Laxmi, the second goddess of the trinity (shown here) is the goddess of wealth. The consort of Vishnu, she was incarnated on earth as the wife of each one of his avatars, exemplifying the devotion of a Hindu wife.

One Faith, Many Paths

Hinduism stands apart from all other religions for several reasons. It has no single founder, no single book of theological law and truth, no central religious organization, and no definition of absolute beginning and end.

Hinduism is a code of life — a collection of attitudes, personal experiences, and spiritual practices. It is, in essence, defined by behaviors rather than beliefs.

According to Hindu philosophy, there is one divine reality, and all religions are simply various interpretations of it. Because of this, Hinduism allows and even encourages individuals to choose a religious path that best suits their social, intellectual, emotional, and spiritual needs.

One Hindu devotee might worship well-known gods such as Vishnu and Shiva in a large, public temple, whereas another might worship less common deities in a private shrine within his or her own home. Yet they would both be considered good Hindus, provided that they honored each other’s choices.

This tolerance makes Hinduism difficult to understand and define, but it does explain why so many gods, goddesses, and rituals are described in the numerous Hindu scriptures.

The Vedas and the Upanishads 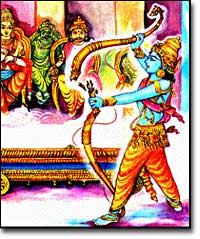 The Ramayana, a classic epic in the Hindu religion, tells the story of Rama and the 7th avatar (incarnation) of Vishnu, the preserver of life. This picture shows Rama breaking the bow of Shiva, winning a contest as well as his wife Sita’s hand in marriage.

Despite the fact that Hindus characteristically believe and do different things, several concepts and traditions bind them together. Many of these beliefs were compiled in a set of scriptures written around 1300 B.C.E. known as the Vedas. It is believed that the Vedas are the eternal truths that were heard, then written down by holy seers.

According to the Vedas, time and life are cyclical. After death, one’s soul leaves the body and is reborn, or reincarnated, into a new form.

The constant cycle of birth and rebirth is known as samsara and the measurement by which the quality of new birth is determined is known as karma. Karma, the accumulated result of one’s actions in various lives, can be good or bad. Righteous and moral conduct, known as dharma, is the road to good karma.

The writings known as the Upanishads appeared six to eight hundred years after the Vedas and focus mostly on how to escape the cycle of rebirth. The Upanishads explain how to leave Samsara through a release and ultimate enlightenment known as moksha. The appearance of the Upanishads marked the beginning of a period known as the Vedantic Age.

The End of the Vedas?

Literally, ‘Vedantic” means “end of the Vedas.” But the Vedic beliefs never really disappeared. Gods of the Vedic tradition became less commonly worshipped, but the Vedic philosophies recorded in the books were surely not forgotten. The principles of karma and dharma were too popular (especially among members of the lower castes) to fade away.

Scholars continue to debate over the beginning of Hinduism, but most agree that during the Vedantic Age (between 800 and 400 B.C.E.) there was a shift to the widespread worship of the gods Vishnu and Shiva. They also agree that this shift coincided with the emergence of new religions in India that sought enlightenment, such as Buddhism and Jainism.

In the years to come, Hinduism became divided into many sects. But true to the foundations of Hinduism, the new sects’ beliefs and practices were accepted. Because of such tolerance, Hinduism thrives today, millennia after it began.