8d. The Birth and Spread of Buddhism

8d. The Birth and Spread of Buddhism 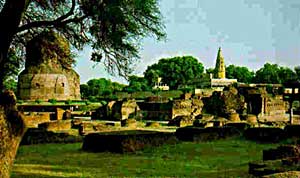 The Buddha preached his first sermon at Sarnath, shown here. He believed that freedom from desires set people free from the cycle of rebirth.

What is humanity’s place within the universe?

For millennia, people around the world have asked this question. In 6th-century South Asia, this question stirred up a small revolution.

The answers provided by traditional Hindu teachings and practices made Indian philosophers and religious sages increasingly upset. Many members of the Vaishya class spoke against the injustices of the Hindu caste system and the overwhelming power of the priestly class, known as the Brahmins.

Many Brahmin priests were considered corrupt because they performed animal sacrifices and practiced other Vedic rituals. Resentment of such rituals and continued anger about unbalanced social power prompted the development of new intellectual teachings and philosophies. These new ideas maintained that some aspects of Hindu tradition and ritual had merit. They never directly challenged Vedic gods or beliefs.

But Siddharta Gautama did.

Siddharta was born about 563 B.C.E. in the foothills of the Himalayas. A prince, he lived a sheltered life amid luxury, wealth, and comfort. But at age 29, Siddharta fled from his palace and discovered something new.

For the first time, he saw poverty, misery, and illness. At home, he soon felt discontented with his materialistic life and the conditions that surrounded him. In response to the emotions triggered by his experience outside the palace, he gave away all his belongings and searched for enlightenment through the abandonment of basic needs.

Siddharta began his quest with a period of starvation. According to legend, he grew so thin during this time that he could feel his hands if he placed one on the small of his back and the other on his stomach. These methods of self-denial eventually led him to a revelation. 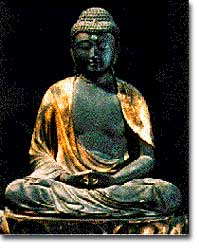 Siddharta Gautama was a prince in a kingdom near the present day border of India and Nepal. Upon his enlightenment, his followers began to call him Buddha, which means, “Enlightened One”.

Siddharta discovered that he needed to find another way — something in between his rich and impoverished lifestyles. He resolved to follow the Middle Path.

Siddharta sought enlightenment through concentration. He sat under a pipal tree, practiced intense meditation, and fought off all worldly temptations. After 40 days, he reached the ultimate goal — nirvana.

He came to understand his previous lives and finally gained release from the cycle of suffering. When he attained Enlightenment he became known by the title of Buddha, or “Awakened One.”

The Buddha set out to share his experience and to teach others to follow the Middle Path. He traveled throughout northeastern India for several decades, spreading his philosophy to anyone who was interested, regardless of gender or caste. Even Brahmins and members of the nobility were converted.

The Buddha died in 483 B.C.E., after 45 years of traveling and teaching. Upon his death, the Buddha passed into a state of nirvana, the ultimate release from suffering in which the self no longer exists and salvation is achieved. Included in his last breaths were four words of inspiration: “Strive on with awareness.” And his followers did.

Small communities of monks and nuns, known as bhikkus, sprung up along the roads that Buddha traveled. Devoted to his teachings, they dressed in yellow robes and wandered the countryside to meditate quietly. For almost 200 years, these humble disciples were overshadowed by the dominant Hindu believers. But the rise of a great empire changed all that.

In the 3rd century B.C.E., several ambitious leaders built the expansive Mauryan empire and fought many bloody battles were fought to extend its boundaries of control. One king, named Ashoka, was so troubled by the effects of the conquests on humanity that he converted to Buddhism. Adopting a code of nonviolence, he renounced all warfare and incorporated principles of Buddhism in his ruling practices.

Ashoka promoted Buddhist expansion by sending monks to surrounding territories to share the teachings of the Buddha. A wave of conversion began, and Buddhism spread not only through India, but also internationally. Ceylon, Burma, Nepal, Tibet, central Asia, China, and Japan are just some of the regions where the Middle Path was widely accepted.

With the great spread of Buddhism, it traditional practices and philosophies became redefined and regionally distinct. Only a small minority practiced the earliest forms of Buddhism, and Buddhist influence as a whole began to fade within India. Some scholars believe that many Buddhist practices were simply absorbed into the tolerant Hindu faith.

Today there are approximately 350 million Buddhists in the world.