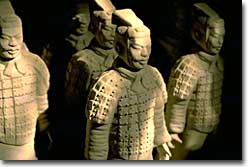 When 13-year-old Qin Emperor Shi Huangdi came to power in 221 B.C.E., one of his first acts was to begin preparing for his death. In addition to his army of over 8,000 clay soldiers, his tomb was lined in bronze and contained a vast wealth of jewels and artifacts beyond imagination.

In 1974, researchers uncovered the tomb of Shi Huangdi, the legendary Ch’in (Qin) emperor who unified China and reigned from 221-207 B.C.E. Inside of the tomb were life-sized soldiers made of terracotta (Italian for “baked earth”), lined up neatly in 38 rows. The soldiers were amazing in their detail, with each having different facial features, likely modeled after actual soldiers. They even carried real bronze weapons, with blades that remained razor sharp after 2,200 years. 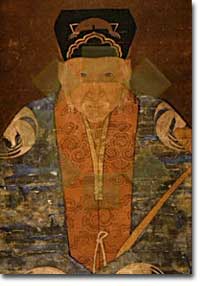 To live forever. That was the goal of ancient Chinese Taoists. They pursued it through many different means including alchemy, diet, gymnastics, and breathing methods.

However, what truly left archaeologists and the rest of the world watching on TV in awe was this: There were over 8,000 soldiers lined up in the tomb! Infantrymen, chariots pulled by life-sized clay horses, crossbowmen, it was a complete army, armed and armored. Stretching 650 feet back into the chamber, these soldiers were created to guard the emperor in the afterlife. Ordered by the emperor at age 13, it took 36 years and 700,000 workers to complete construction of the massive tomb and its army.

A Lesson in Paradoxes

Welcome to the mystery and wonder that is ancient China. In the subsequent readings, you will learn that Chinese culture developed differently from any other ancient civilization. Chinese history is a lesson in paradoxes. Their past is full of natural disasters and wars; yet some of the most beautiful art, literature, and architecture have been created and preserved through the 13 dynastic periods, spanning 4,000 years into the 20th century. These trends are reflected by three of the most influential dynasties of China: the Shang, Han, and Tang.

Written language began in China with the oracle bones and tortoise shells of the Shang dynasty, and the beauty of their bronze work was unrivaled for hundreds of years. The Han dynasty will always be remembered for opening up to the Western world through its use of the Silk Road. Ideas such as Buddhism were exchanged as freely as silk and spices with lands as far west as India and the Roman Empire.

A little over a decade ago, researchers found the perfectly preserved bodies of a band of travelers migrating through the bleak western deserts of China. What made this find startling was that the mummies were European, with pale faces and reddish hair. Could this signal the discovery of a new civilization?

China’s most enduring landmark, the Great Wall, was built primarily during the Han period. Its earthen walls protected the Chinese people from foreign invasions throughout the centuries. It was during the Tang dynasty that the most beautiful poetry of dynastic China was written, as were the civil examinations that remained in use into the 20th century. China was, and is, truly a land of invention and discovery.

The major philosophies originating in China, Taoism and Confucianism, will be examined in the hope that we may learn from their vast wealth of knowledge. Brilliant thinkers such as Lao Tzu and Confucius molded the political and religious landscapes of dynastic China with their radical ideas about the nature of man.