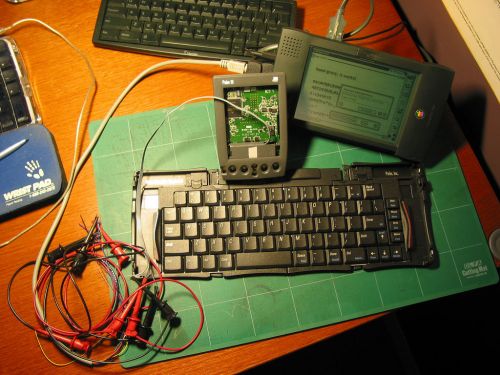 In computing, a device driver (commonly referred to as a driver) is a computer program that operates or controls a particular type of device that is attached to a computer. A driver provides a software interface to hardware devices, enabling operating systems and other computer programs to access hardware functions without needing to know precise details of the hardware being used.

A driver typically communicates with the device through the computer bus or communications subsystem to which the hardware connects. When a calling program invokes a routine in the driver, the driver issues commands to the device. Once the device sends data back to the driver, the driver may invoke routines in the original calling program. Drivers are hardware-dependent and operating-system-specific. They usually provide the interrupt handling required for any necessary asynchronous time-dependent hardware interface.

Device drivers simplify programming by acting as translator between a hardware device and the applications or operating systems that use it. Programmers can write the higher-level application code independently of whatever specific hardware the end-user is using.

For example, a high-level application for interacting with a serial port may simply have two functions for “send data” and “receive data.” At a lower level, a device driver implementing these functions would communicate to the particular serial port controller installed on a user’s computer. The commands needed to control a 16550 UART are much different from the commands needed to control an FTDI serial port converter, but each hardware-specific device driver abstracts these details into the same (or similar) software interface.

Writing a device driver requires an in-depth understanding of how the hardware and the software works for a given platform function. Because drivers require low-level access to hardware functions in order to operate, drivers typically operate in a highly privileged environment and can cause system operational issues if something goes wrong. In contrast, most user-level software on modern operating systems can be stopped without greatly affecting the rest of the system. Even drivers executing in user mode can crash a system if the device is erroneously programmed. These factors make it more difficult and dangerous to diagnose problems.

The task of writing drivers thus usually falls to software engineers or computer engineers who work for hardware-development companies. This is because they have better information than most outsiders about the design of their hardware. Moreover, it was traditionally considered in the hardware manufacturer’s interest to guarantee that their clients can use their hardware in an optimum way. Typically, the logical device driver (LDD) is written by the operating system vendor, while the physical device driver (PDD) is implemented by the device vendor. But in recent years non-vendors have written numerous device drivers, mainly for use with free and open source operating systems. In such cases, it is important that the hardware manufacturer provides information on how the device communicates. Although this information can instead be learned by reverse engineering, this is much more difficult with hardware than it is with software.

Microsoft has attempted to reduce system instability due to poorly written device drivers by creating a new framework for driver development, called Windows Driver Foundation (WDF). This includes User-Mode Driver Framework (UMDF) that encourages development of certain types of drivers—primarily those that implement a message-based protocol for communicating with their devices—as user-mode drivers. If such drivers malfunction, they do not cause system instability. The Kernel-Mode Driver Framework (KMDF) model continues to allow development of kernel-mode device drivers, but attempts to provide standard implementations of functions that are known to cause problems, including cancellation of I/O operations, power management, and plug and play device support.

Apple has an open-source framework for developing drivers on Mac OS X called the I/O Kit.

In Linux environments, programmers can build device drivers as parts of the kernel, separately as loadable modules, or as user-mode drivers (for certain types of devices where kernel interfaces exist, such as for USB devices). Makedev includes a list of the devices in Linux: ttyS (terminal), lp (parallel port), hd (disk), loop, sound (these include mixer, sequencer, dsp, and audio)… 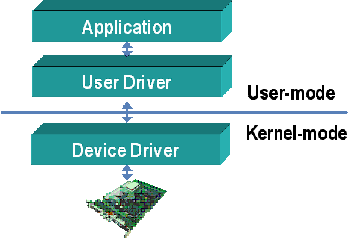 Kernel space can be accessed by user module only through the use of system calls. End user programs like the UNIX shell or other GUI-based applications are part of the user space. These applications interact with hardware through kernel supported functions.

Because of the diversity of modern hardware and operating systems, drivers operate in many different environments. Drivers may interface with:

Common levels of abstraction for device drivers include:

So choosing and installing the correct device drivers for given hardware is often a key component of computer system configuration.

A device on the PCI bus or USB is identified by two IDs which consist of 4 hexadecimal numbers each. The vendor ID identifies the vendor of the device. The device ID identifies a specific device from that manufacturer/vendor.

A PCI device has often an ID pair for the main chip of the device, and also a subsystem ID pair which identifies the vendor, which may be different from the chip manufacturer.