Humans are excellent classifiers. Scientists classify organisms based upon features that are shared in common with other related organisms. The formal process of classifying organisms is referred to as taxonomy.

Traditional taxonomy relies primarily on physical traits, so that organisms that look alike are placed in the same group.

Classifying organisms based on shared evolutionary history attaches powerful information to a classification scheme. While traditional taxonomy relied primarily on classifying organisms by their shared physical characteristics (or morphology), technological advancements have allowed scientists to determine an organism’s evolutionary history more accurately. Taxonomy based on presumed evolutionary relationships is referred to as phylogeny.

Usually, traditional taxonomic systems agree with phylogenetic systems when determining where organisms should be classified. However, sometimes, striking conflicts can arise. For example, birds are traditionally placed in their own class Aves. However, a wealth of research indicates that birds are actually living dinosaurs, and are thus technically reptiles.

Check out some more information on this fascinating situation.

A dichotomous key is an identification key that consists of a series of choices that ultimately lead to the identification of the object in question. In each step of a dichotomous key, the user has two choices and must pick the one that most correctly describes the object. Each choice leads to a new set of choices. To help you understand how a key like this works, consider the following four insects:

After studying the insects, you might classify the insects by wing covering, body shape, and the direction in which the wings point.

The first step in the key could be organized the following way:

Step 2 consists of a pair of statements that distinguishes between the ladybug and the grasshopper.

Step 3 consists of a pair of statements that distinguishes between the dragonfly and the housefly.

Notice that there were four organisms to be identified and it only took three steps to identify them. After making a key, you should end up with one less step than the total number of organisms you are trying to identify.

When constructing a key, keep the following in mind:

When using a key, keep the following in mind:

A new system of phylogenetic classification , called cladistics, is currently in practice today. A cladogram is a hypothesis about the evolutionary relationships between the organisms depicted on the tree. In this way, a cladogram illustrates the lines of descent for these organisms. A cladogram proposes an answer to the question “Which groups of organisms share a common ancestry?” 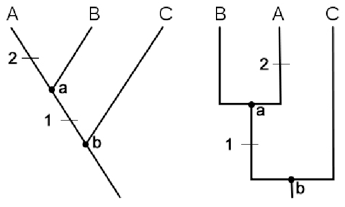 Take a look at these two identical, generic cladograms. The capital letters indicate the terminal organisms represented in the tree. The numbers indicate characters present in organisms beyond that point. And the nodes (indicated by the lowercase letters and the dots) represent the common ancestors of the terminal organisms. Even though they look different, if you examine them closely, these two cladograms are depicting the same relationships between critters A, B and C.

Now examine the cladogram at the bottom of this page illustrating the evolutionary relationships between a hagfish, shark, bony fish, frog, rat, bird, and lizard.

Caminalcules were created by the evolutionary biologist Joseph Caminal and were originally called Caminalcules. The 29 living species and 48 fossils were published by Robert R. Sokal (1983a) in the journal Systematic Zoology. They were used to conduct detailed research on evolutionary classification.

Using the provided sheet of paper with illustrated Caminalcules, cut out each individual using a pair of scissors. Next, working in groups of 2 or 3, categorize individuals into subgroupings based on shared morphological features that distinguish them from other subgroupings (known as a derived feature). Once you have categorized the species into four or five major groups, paste the animals onto a piece of paper and indicate branches delineated by a shared derived feature. The instructor will illustrate an example of a completed cladogram.

Remember! Cladograms are hypotheses that must be tested! Your hypothesis might be different from someone else’s. Be prepared to defend your decision (with evidence) to someone whose hypothesis is different.