A very common and easy-to-understand application is the height of a ball thrown at the ground off a building. Because gravity will make the ball speed up as it falls, a quadratic equation can be used to estimate its height any time before it hits the ground. Note: The equation isn’t completely accurate, because friction from the air will slow the ball down a little. For our purposes, this is close enough.

A ball is thrown off a building from 200 feet above the ground. Its starting velocity (also called initial velocity) is [latex]−10[/latex] feet per second. (The negative value means it’s heading toward the ground.)

When the ball hits the ground, the height is 0. Substitute 0 for [latex]h[/latex].

Simplify. Be very careful with the signs.

Use a calculator to find both roots.

Consider the roots logically. One solution, [latex]−3.86[/latex], cannot be the time because it is a negative number. The other solution, [latex]3.24[/latex] seconds, must be when the ball hits the ground.

The ball hits the ground approximately [latex]3.24[/latex] seconds after being thrown.

In the next video we show another example of how the quadratic equation can be used to find the time it takes for an object in free fall to hit the ground.

Here are some more similar objects in free fall examples.

Example: Applying the Vertex and [latex]x[/latex]-Intercepts of a Parabola

a. When does the ball reach the maximum height?

b. What is the maximum height of the ball?

c. When does the ball hit the ground?

Solution
a. The ball reaches the maximum height at the vertex of the parabola.

The ball reaches a maximum height after 2.5 seconds.

b. To find the maximum height, find the y coordinate of the vertex of the parabola.

The ball reaches a maximum height of 140 feet.

c. To find when the ball hits the ground, we need to determine when the height is zero, [latex]H\left(t\right)=0[/latex].

We use the quadratic formula.

Because the square root does not simplify nicely, we can use a calculator to approximate the values of the solutions.

The second answer is outside the reasonable domain of our model, so we conclude the ball will hit the ground after about 5.458 seconds. 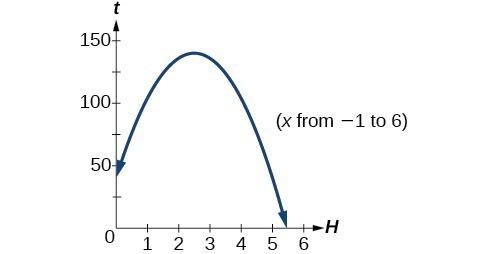 a. When does the rock reach the maximum height?

b. What is the maximum height of the rock?

c. When does the rock hit the ocean?

Applications of quadratic functions: determining the width of a border

The area problem below does not look like it includes a Quadratic Formula of any type, and the problem seems to be something you have solved many times before by simply multiplying. But in order to solve it, you will need to use a quadratic equation.

Bob made a quilt that is 4 ft [latex]\times[/latex] 5 ft. He has 10 sq. ft. of fabric he can use to add a border around the quilt. How wide should he make the border to use all the fabric? (The border must be the same width on all four sides.)

Sketch the problem. Since you don’t know the width of the border, you will let the variable [latex]x[/latex] represent the width.

In the diagram, the original quilt is indicated by the red rectangle. The border is the area between the red and blue lines.

(Both dimensions are written in terms of the same variable, and you will multiply them to get an area! This is where you might start to think that a quadratic equation might be used to solve this problem.)

There are 10 sq ft of fabric for the border, so set the area of border to be 10.

Subtract 10 from both sides so that you have a quadratic equation in standard form and can apply the Quadratic Formula to find the roots of the equation.

Factor out the greatest common factor, 2, so that you can work with the simpler equivalent equation, [latex]2x^{2}+9x–5=0[/latex].

Find the solutions, making sure that the [latex]\pm[/latex] is evaluated for both values.

Ignore the solution [latex]x=−5[/latex], since the width could not be negative.

The width of the border should be 0.5 ft.

Here is a video which gives another example of using the quadratic formula for a geometry problem involving the border around a quilt.

Finding the maximum and minimum values of a quadratic function

There are many real-world scenarios that involve finding the maximum or minimum value of a quadratic function, such as applications involving area and revenue. 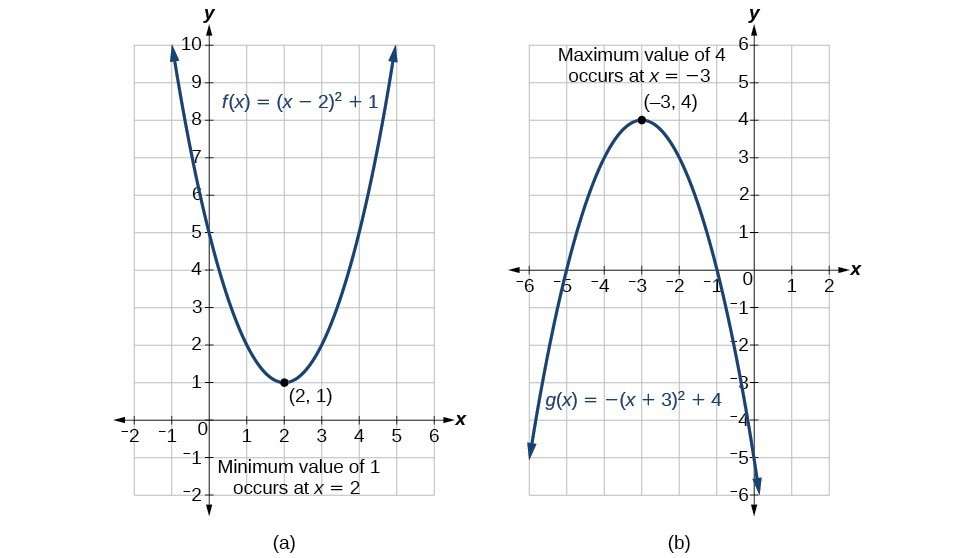 Find two numbers [latex]x[/latex] and [latex]y[/latex] whose difference is 100 and whose product is a minimum.

We are trying to find the minimum of the product [latex]P=xy[/latex] of two numbers, such that their difference is 100: [latex]y-x=100[/latex]. First, we rewrite one variable in terms of the other:

Next, we plug in the above relationship between the variables into the first equation:

Example: Finding the Maximum Value of a Quadratic Function

A backyard farmer wants to enclose a rectangular space for a new garden within her fenced backyard. She has purchased 80 feet of wire fencing to enclose three sides, and she will use a section of the backyard fence as the fourth side. 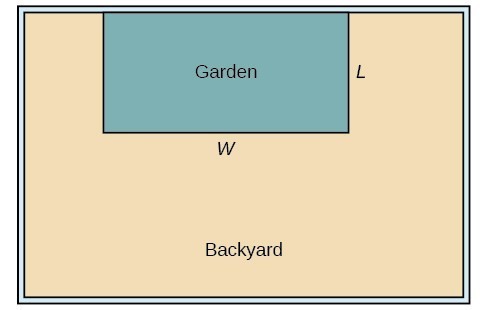 Let’s use a diagram such as the one above to record the given information. It is also helpful to introduce a temporary variable, W, to represent the width of the garden and the length of the fence section parallel to the backyard fence.

Now we are ready to write an equation for the area the fence encloses. We know the area of a rectangle is length multiplied by width, so

This formula represents the area of the fence in terms of the variable length [latex]L[/latex]. The function, written in general form, is

2) The quadratic has a negative leading coefficient, so the graph will open downward, and the vertex will be the maximum value for the area. In finding the vertex, we must be careful because the equation is not written in standard polynomial form with decreasing powers. This is why we rewrote the function in general form above. Since [latex]a[/latex] is the coefficient of the squared term, [latex]a=-2,b=80[/latex], and [latex]c=0[/latex].

To find the vertex:

The maximum value of the function is an area of 800 square feet, which occurs when [latex]L=20[/latex] feet. When the shorter sides are 20 feet, there is 40 feet of fencing left for the longer side. To maximize the area, she should enclose the garden so the two shorter sides have length 20 feet and the longer side parallel to the existing fence has length 40 feet. 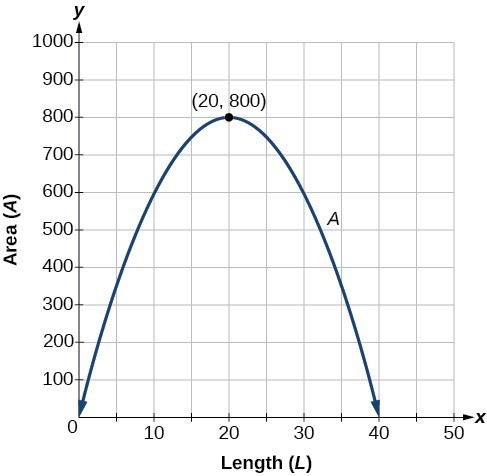 How To: Given an application involving revenue, use a quadratic equation to find the maximum.

The unit price of an item affects its supply and demand. That is, if the unit price goes up, the demand for the item will usually decrease. For example, a local newspaper currently has 84,000 subscribers at a quarterly charge of $30. Market research has suggested that if the owners raise the price to $32, they would lose 5,000 subscribers. Assuming that subscriptions are linearly related to the price, what price should the newspaper charge for a quarterly subscription to maximize their revenue?

Because the number of subscribers changes with the price, we need to find a relationship between the variables. We know that currently [latex]p=30[/latex] and [latex]Q=84,000[/latex]. We also know that if the price rises to $32, the newspaper would lose 5,000 subscribers, giving a second pair of values, [latex]p=32[/latex] and [latex]Q=79,000[/latex]. From this we can find a linear equation relating the two quantities. The slope will be

This tells us the paper will lose 2,500 subscribers for each dollar they raise the price. We can then solve for the y-intercept.

This gives us the linear equation [latex]Q=-2,500p+159,000[/latex] relating cost and subscribers. We now return to our revenue equation.

We now have a quadratic function for revenue as a function of the subscription charge. To find the price that will maximize revenue for the newspaper, we can find the vertex.

This could also be solved by graphing the quadratic. We can see the maximum revenue on a graph of the quadratic function. 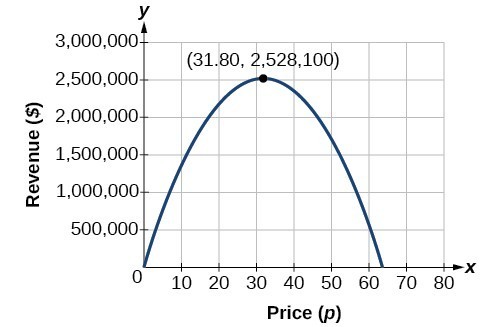 A coordinate grid has been superimposed over the quadratic path of a basketball in the picture below. Find an equation for the path of the ball. Does the shooter make the basket? 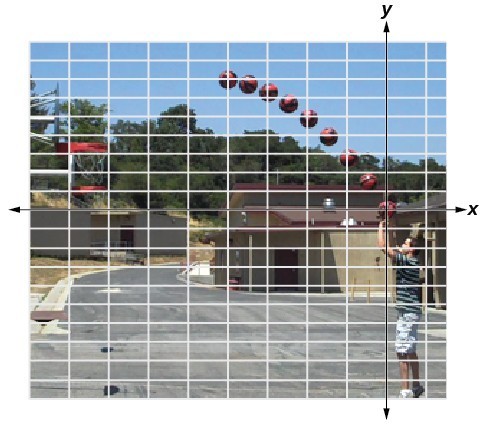