We began this module by considering how polynomials can be used by computers to create digital images (remember the dolphin?). Let’s close with a different example of polynomials in real life, for example the profits of a cell phone company. In the following polynomial function the variable x represents the number of phones manufactured.

Using an online graphing calculator, we generated this graph of the profit equation. 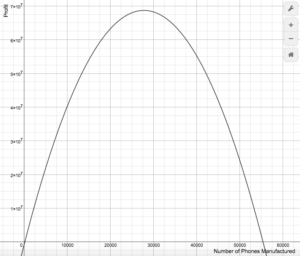 The top of the curve represents the “sweet spot” that many business would like to achieve between making and spending money. Using some tools from later math classes, we can find that the maximum amount of profit can be gained from producing 27,777 phones.

Polynomials have many practical uses and have been studied widely by mathematicians for many years. Our vast knowledge of how they behave mixed with high speed computing allows us to continue to find even more uses for them.