Why learn about roots and rational exponents? 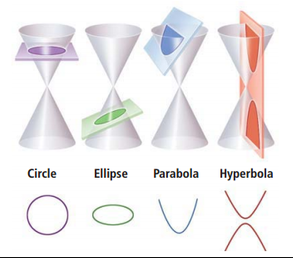 One of the most well known uses of roots and rational exponents is found in quadratic equations. Quadratic comes from quadratus, the Latin word for square. When we factor a quadratic equation, we are completing the square.

Humans have been working with quadratic equations for over two thousand years in many areas around the world, including India, Egypt, China, and Greece. The circle, ellipse, hyperbola, and parabola are all examples of quadratic curves, which have been studied since the ancient Greeks. Of these, however, only the circle was relevant to the real world until the beginning of the Renaissance in the 16th century.

The Renaissance period was a rediscovery of Greek philosophy which, as you probably realize by now, includes a significant amount of mathematical principles. In addition to the rediscovery of old ideas, Renaissance thinkers were discovering new facts about the world around them, some of which challenged the ideas of the ancient Greeks.

For example, in 1543 Copernicus published his theory that the Earth rotated around the Sun, which was the exact opposite of what most people in Western culture believed at the time. Copernicus thought that the orbit of the Earth was a circle, which was regarded as the most perfect possible curve because of its symmetry.

In 1609 Kepler published his first two laws of planetary motion. Building off of Tycho Brahe’s work, Kepler discovered that instead of circles planets move around the sun in ellipses. Other objects, Kepler found, may also follow a parabola or hyberbola which, along with ellipses, belong to a group of curves known as conic sections.

The invention of the telescope in the 17th century allowed us to learn even more about the planets. Using a telescope he created, Galileo was able to observe the moon, discover Jupiter’s four satellites, verify the phases of Venus, and prove the validity of Copernicus’ theory of heliocentrism. His telescope used lenses, the shape of which was formed by two intersecting hyperbolae. Newton’s reflecting telescope includes a mirror for which each cross section takes the shape of a parabola. Even the Hubble Space Telescope uses paraboloidal mirrors. As unbelievable as it may seem, our world of modern communications, from Facebook to GPS to planetary exploration, is made possible thanks to quadratic equations!