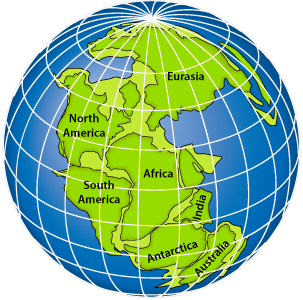 Figure 1. The continents fit together like pieces of a puzzle. This is how they looked 250 million years ago.

Find a map of the continents and cut each one out. Better yet, use a map where the edges of the continents show the continental shelf. That’s the true size and shape of a continent. Can you fit the pieces together? The easiest link is between the eastern Americas and western Africa and Europe, but the rest can fit together too (Figure 1).

Besides the way the continents fit together, Wegener and his supporters collected a great deal of evidence for the continental drift hypothesis.

Scientists argued that there was no way to explain how solid continents could plow through solid oceanic crust. Wegener’s idea was nearly forgotten until technological advances presented even more evidence that the continents moved and gave scientists the tools to develop a mechanism for Wegener’s drifting continents. 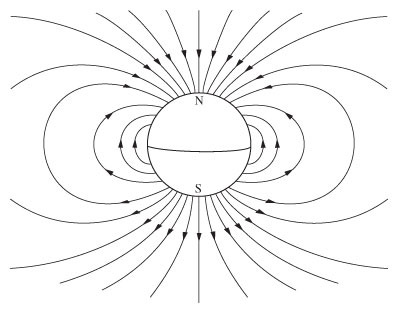 Puzzling new evidence came in the 1950s from studies on the Earth’s magnetic history (figure 4). Scientists used magnetometers, devices capable of measuring the magnetic field intensity, to look at the magnetic properties of rocks in many locations.

Magnetite crystals are like tiny magnets that point to the north magnetic pole as they crystallize from magma. The crystals record both the direction and strength of the magnetic field at the time. The direction is known as the field’s magnetic polarity.

Geologists noted important things about the magnetic polarity of different aged rocks on the same continent: 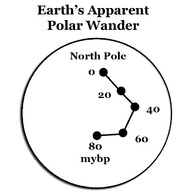 In other words, although the magnetite crystals were pointing to the magnetic north pole, the location of the pole seemed to wander. Scientists were amazed to find that the north magnetic pole changed location through time (figure 6).

There are three possible explanations for this:

Geologists noted that for rocks of the same age but on different continents, the little magnets pointed to different magnetic north poles.

The scientists looked again at the three possible explanations. Only one can be correct. If the continents had remained fixed while the north magnetic pole moved, there must have been two separate north poles. Since there is only one north pole today, the only reasonable explanation is that the north magnetic pole has remained fixed but that the continents have moved.

To test this, geologists fitted the continents together as Wegener had done. It worked! There has only been one magnetic north pole and the continents have drifted (figure 7). They named the phenomenon of the magnetic pole that seemed to move but actually did not apparent polar wander. 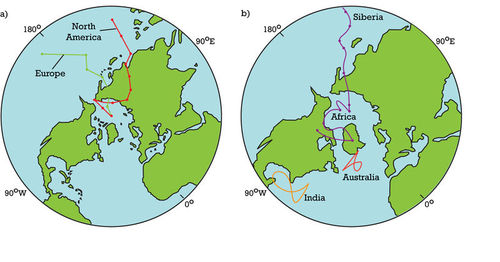 This evidence for continental drift gave geologists renewed interest in understanding how continents could move about on the planet’s surface.