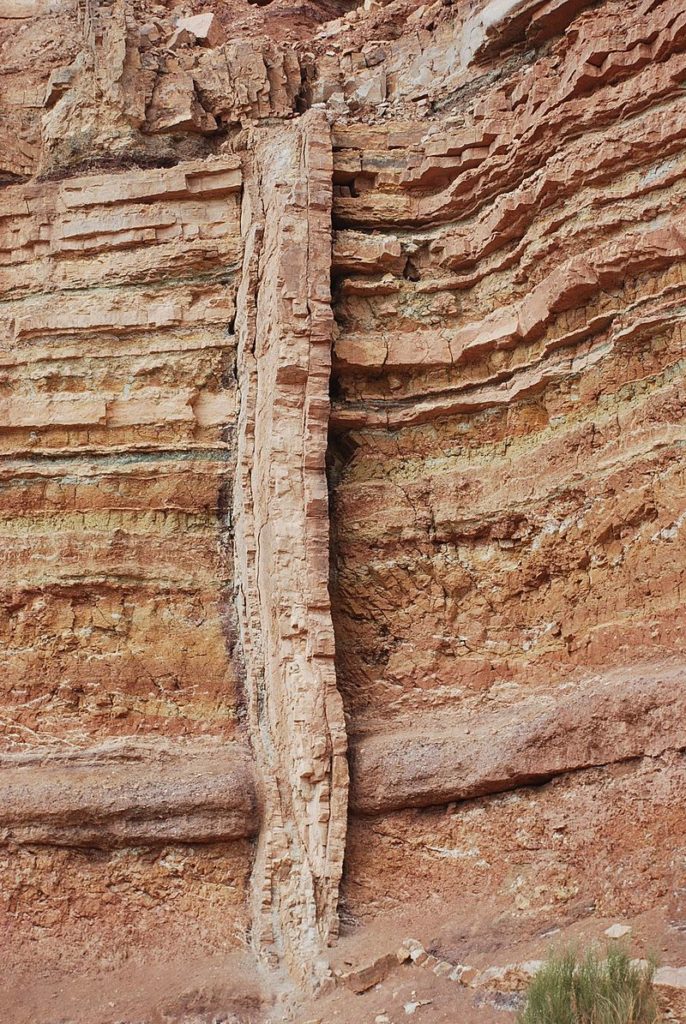 A dike is a sheet of rock that formed in a fracture in a pre-existing rock body. Dikes can be either magmatic or sedimentary in origin. Magmatic dikes form when magma intrudes into a crack then crystallizes as a sheet intrusion, either cutting across layers of rock or through an unlayered mass of rock. Clastic dikes are formed when sediment fills a pre-existing crack.[1]

An intrusive dike is an igneous body with a very high aspect ratio, which means that its thickness is usually much smaller than the other two dimensions. Thickness can vary from sub-centimeter scale to many meters, and the lateral dimensions can extend over many kilometres. A dike is an intrusion into an opening cross-cutting fissure, shouldering aside other pre-existing layers or bodies of rock; this implies that a dike is always younger than the rocks that contain it. Dikes are usually high-angle to near-vertical in orientation, but subsequent tectonic deformation may rotate the sequence of strata through which the dike propagates so that the dike becomes horizontal. Near-horizontal, or conformable intrusions, along bedding planes between strata are called intrusive sills.

Sometimes dikes appear in swarms, consisting of several to hundreds of dikes emplaced more or less contemporaneously during a single intrusive event. The world’s largest dike swarm is the Mackenzie dike swarm in the Northwest Territories, Canada.[2]

Dikes often form as either radial or concentric swarms around plutonic intrusives, volcanic necks or feeder vents in volcanic cones. The latter are known as ring dikes.

Dikes can vary in texture and their composition can range from diabase or basaltic to granitic or rhyolitic, but on a global perspective the basaltic composition prevails, manifesting ascent of vast volumes of mantle-derived magmas through fractured lithosphere throughout Earth history. Pegmatite dikes comprise extremely coarse crystalline granitic rocks—often associated with late-stage granite intrusions or metamorphic segregations. Aplite dikes are fine-grained or sugary-textured intrusives of granitic composition. 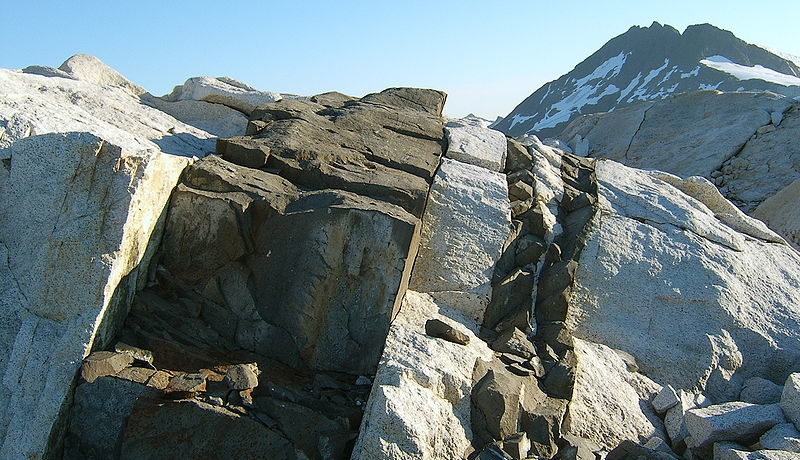 Figure 2. A small dike on the Baranof Cross-Island Trail, Alaska 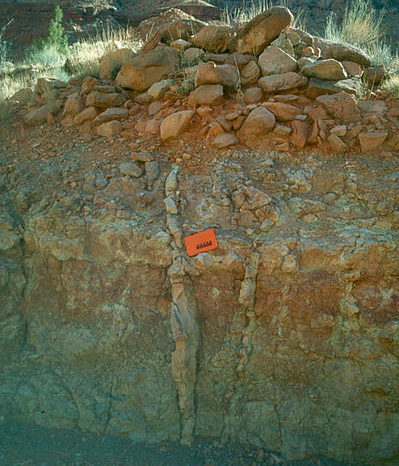 Sedimentary dikes or clastic dikes are vertical bodies of sedimentary rock that cut off other rock layers. They can form in two ways:

In geology, a sill is a tabular sheet intrusion that has intruded between older layers of sedimentary rock, beds of volcanic lava or tuff, or even along the direction of foliation in metamorphic rock. The term sill is synonymous with concordant intrusive sheet. This means that the sill does not cut across preexisting rocks, in contrast to dikes, discordant intrusive sheets which do cut across older rocks. Sills are fed by dikes, except in unusual locations where they form in nearly vertical beds attached directly to a magma source. The rocks must be brittle and fracture to create the planes along which the magma intrudes the parent rock bodies, whether this occurs along preexisting planes between sedimentary or volcanic beds or weakened planes related to foliation in metamorphic rock. These planes or weakened areas allow the intrusion of a thin sheet-like body of magma paralleling the existing bedding planes, concordant fracture zone, or foliations. 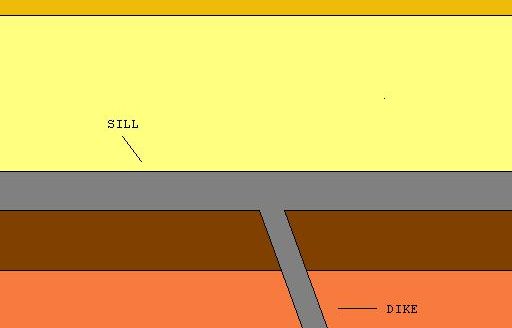 Figure 4. Illustration showing the difference between a dike and a sill.

Sills parallel beds (layers) and foliations in the surrounding country rock. They can be originally emplaced in a horizontal orientation, although tectonic processes may cause subsequent rotation of horizontal sills into near vertical orientations. Sills can be confused with solidified lava flows; however, there are several differences between them. Intruded sills will show partial melting and incorporation of the surrounding country rock. On both contact surfaces of the country rock into which the sill has intruded, evidence of heating will be observed (contact metamorphism). Lava flows will show this evidence only on the lower side of the flow. In addition, lava flows will typically show evidence of vesicles (bubbles) where gases escaped into the atmosphere. Because sills generally form at shallow depths (up to many kilometers) below the surface, the pressure of overlying rock prevents this from happening much, if at all. Lava flows will also typically show evidence of weathering on their upper surface, whereas sills, if still covered by country rock, typically do not. 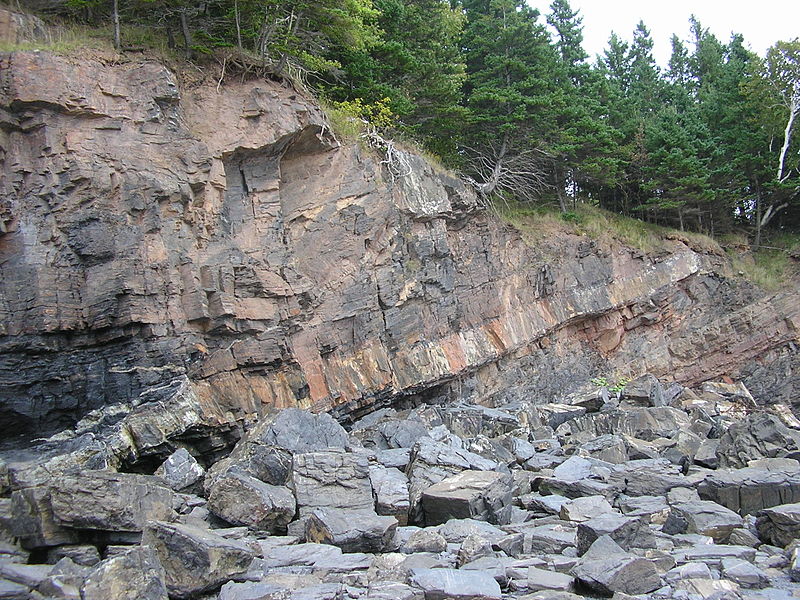 Certain layered intrusions are a variety of sill that often contain important ore deposits. Precambrian examples include the Bushveld, Insizwa and the Great Dyke complexes of southern Africa, the Duluth intrusive complex of the Superior District, and the Stillwater igneous complex of the United States. Phanerozoic examples are usually smaller and include the Rùm peridotite complex of Scotland and the Skaergaard igneous complex of east Greenland. These intrusions often contain concentrations of gold, platinum, chromium and other rare elements.

Despite their concordant nature, many large sills change stratigraphic level within the intruded sequence, with each concordant part of the intrusion linked by relatively short dike-like segments. Such sills are known as transgressive, examples include the Whin Sill and sills within the Karoo basin.[3] The geometry of large sill complexes in sedimentary basins has become clearer with the availability of 3D seismic reflection data.[4] Such data has shown that many sills have an overall saucer shape and that many others are at least in part transgressive.[5]

Dikes may also be formed due to liquefaction at the time of earthquakes. “Sill” may also refer to the rise in depth near the mouth of a fjord caused by the terminal moraine of the previous glacier.