Geologists use a lot of tools to aid their studies. Some of the most common tools used are compasses, rock hammers, hand lenses, and field books.

There are a number of different (specialised) magnetic compasses used by geologists to measure orientation of geological structures, as they map in the field, to analyse (and document) the geometry of bedding planes, joints, and/or metamorphic foliations and lineations.[1] In this aspect the most common device used to date is the analogue compass.

Classic geological compasses that are of practical use combine two functions, direction finding and navigation (especially in remote areas), and the ability to measure strike and dip of bedding surfaces and/or metamorphic foliation planes. Structural geologists (i.e. those concerned with geometry and the pattern of relative movement) also have a need to measure the plunge and plunge direction of lineations.

Compasses in common use include the Brunton compass and the Silva compass.

The concept of modern geological compass was developed by Eberhard Clar of the University of Vienna during his work as structural geologist. He published it in 1954.[2] An advantage of his concept is that strike and dip is measured in one step, using the vertical circle for dip angle and the compass for the strike direction. The first implementation was done by the VEB Freiberger Präzisionsmechanik in Freiberg, Germany. The details of the design were made in a close cooperation with the Freiberg University of Mining and Technology.[3] 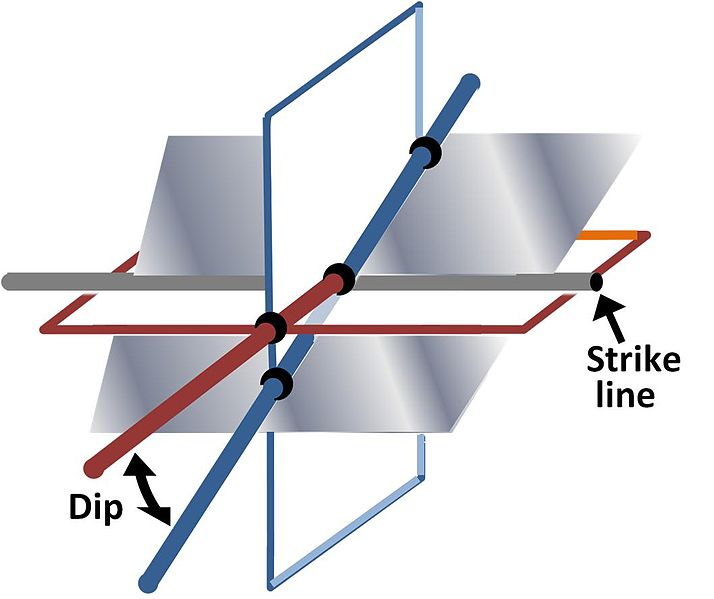 This compass has the most use by structural geologists, measuring foliation and lineation in metamorphic rocks, or faults and joints in mining areas.

With the advent of the smartphone, geological compass programs based on the 3-axis teslameter and the 3-axis accelerometer have also begun to appear. These compass programs use vector algebra to compute plane and lineation orientations from the accelerometer and magnetometer data, and permit rapid collection of many measurements. However, some problems are potentially present. Smartphones produce a strong magnetic field of their own which must be compensated by software; as well, because the Earth’s magnetic field fluctuates rapidly, measurements made by smartphone geological compasses can potentially be susceptible to considerable noise. Users of a smartphone compass should carefully calibrate their devices and run several tests against traditional magnetic compasses in order to understand the limitations of their chosen program. 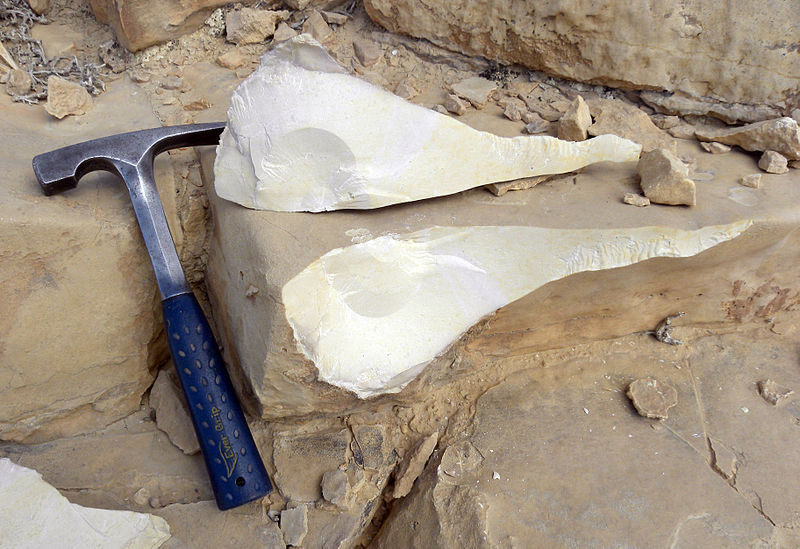 A geologist’s hammer used to break up rocks, as well as a scale in the photograph

A geologist’s hammer, rock hammer, rock pick, or geological pick is a hammer used for splitting and breaking rocks. In field geology, they are used to obtain a fresh surface of a rock to determine its composition, nature, mineralogy, history, and field estimate of rock strength. In fossil and mineral collecting, they are employed to break rocks with the aim of revealing fossils inside. Geologist’s hammers are also sometimes used for scale in a photograph.

Geologist’s hammers, as with most hammers, have two heads, one on either side. Most commonly, the tool consists of a flat head on one end, with either a chisel or a pick head at the other end.[4] 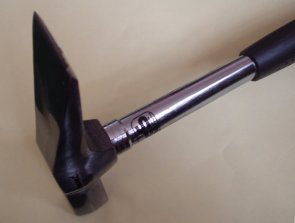 A geologist’s hammer with tubular shaft and chisel head

The effective power of a geologist’s hammer is mainly considered to be a reflection of its head weight and handle length. Head weight may range from 8 oz (225 g) or less on a small hammer—such as would generally be used for casual use or by children—to 24 oz (680 g) and greater. A hammer of 16 oz (450 g) is often quoted as sufficient for all rock types, although metamorphic or igneous rocks often require heavier hammers for a more powerful blow.

The best geologist’s hammers are forged from one piece of hardened steel, which renders them sturdy and long-lasting. Alternatives such as tubular- and wooden-shafted hammers are more commonly used, in part due to their lower cost. Such alternative handles sacrifice strength and make the hammer unsuitable for high-strain activities such as prying.

The form and weighting of the shaft defines the balance, which itself defines the ease, efficiency, and comfort of use of the geologist’s hammer. 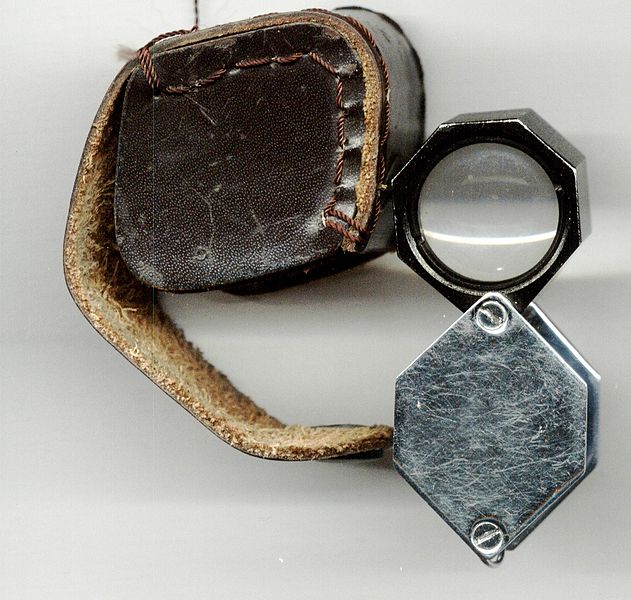 Loupe used by a geologist

The hand lens is a vital geological field tool used to identify small mineral crystals and structures in rocks. It is a simple, small magnification device used to see small details more closely. Unlike a magnifying glass, a loupe does not have an attached handle, and its focusing lens(es) are contained in an opaque cylinder or cone or fold into an enclosing housing that protects the lenses when not in use.

Jewelers typically use a monocular, handheld loupe in order to magnify gemstones and other jewelry that they wish to inspect.[5] A 10x magnification is good to use for inspecting jewelry and hallmarks[6] and is the Gemological Institute of America’s standard for grading diamond clarity. Stones will sometimes be inspected at higher magnifications than 10x, although the depth of field, which is the area in focus, becomes too small to be instructive.[7] The accepted standard for grading diamonds is therefore that inclusions and blemishes visible at 10x impact the clarity grade.[8]

Field books are used to take fieldnotes; they can be anything from a composition type notebook to a spiral, but most use an actual “field book” like those available for purchase here. Fieldnotes refer to qualitative notes recorded by scientists during or after their observation of a specific phenomenon they are studying. They are intended to be read as evidence that gives meaning and aids in the understanding of the phenomenon. Fieldnotes allow the researcher to access the subject and record what they observe in an unobtrusive manner.

One major disadvantage of taking fieldnotes is that they are recorded by an observer and are thus subject to (a) memory[9] and (b) possibly, the conscious or unconscious bias of the observer. It is best to record fieldnotes immediately after leaving the site to avoid forgetting important details.

Fieldnotes are particularly valued in  geology and other descriptive sciences such as ethnography, biology, and archaeology.

Fieldnotes can also include sketches, diagrams, and other drawings. Visually capturing a phenomenon requires the observer to pay more attention to every detail as to not overlook anything.[13]