Maps are essential tools in geology. Maps are as important in geology as written texts are in the study of literature. By studying maps, a geologist can see the shape and geology of the earth’s surface and deduce the geological structures that lie hidden beneath the surface. Geologists are trained in map reading and map making. Many geologists have experience mapping some part of the earth’s surface.

It takes some training to read maps skillfully. You are not expected to become a geological expert in reading maps. However, you will be expected to develop your map reading skills as you use maps to help you learn geology. 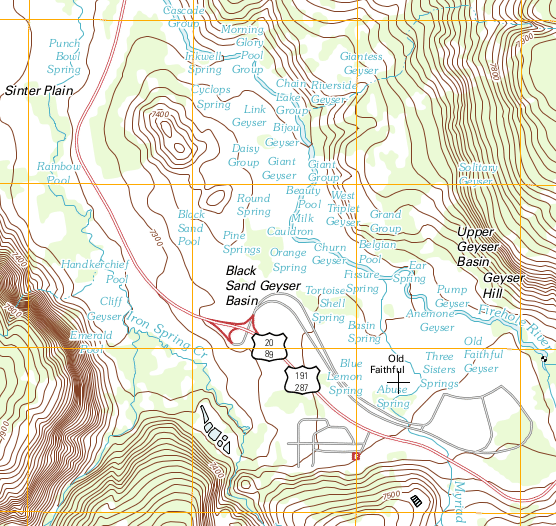 A topographic map (like the one in figure 1) is one type of map used by geologists. Topographic maps show the three-dimensional shape of the land and features on the surface of the earth. Topographic maps are also used by hikers, planners who make decisions on zoning and construction permits, government agencies involved in land use planning and hazard assessments, and civil engineers. The topographic maps drawn and published by the U. S. Geological Survey portray the grids that are used on deeds to identify the location of real estate, so homeowners and property owners sometimes find it useful to refer to topographic maps of their area.

Topographic maps are important in geology because they portray the surface of the earth in detail. This view of the surface shows patterns that provide information about the geology beneath the surface.

The landforms of the earth result from surface processes such as erosion or sedimentation combined with internal geological processes such as magma rising to create a volcano or a ridge of bedrock pushed up along a fault. By studying the shape of the earth’s surface through topographic maps, geologists can understand the nature of surface processes in a given area, including zones subjected to landsliding, places undergoing erosion and places where sediment is accumulating. They can also find clues to the underlying geologic structure and geologic history of the area.

In addition to a topographic map, a complete understanding of the underlying geologic structure and history of an area requires completion of a geologic map and cross-sections. A topographic map provides the frame of reference upon which most geologic maps are constructed.

Standard United States Geological Survey topographic maps cover a quadrangle. A map quadrangle spans a fraction of a degree of longitude east-to-west and the same fraction of a degree of latitude north-to-south. Because lines of longitude degrees (also called meridians) in the Northern Hemisphere come closer and closer together the nearer they get to the North Pole, whereas lines of latitude degrees remain the same distance apart as they circle the earth, quadrangle maps span less distance east-to-west than they do north-to-south.

Meridians, lines of longitude, run from the South Pole to the North Pole, converging (coming together) at the poles. Because the meridians converge at the poles, a degree of longitude gets smaller and smaller near each pole. In contrast, a degree of latitude remains approximately 69 miles across, no matter how near or far from the poles or equator it is.

Degrees of latitude and longitude are divided into arc minutes and arc seconds. In this context, they are usually just called minutes and seconds, but it must be kept in mind that these minutes and seconds are units of angles, not units of time. These units, which divide angles into smaller parts, work as follows:

Name, Size, and Latitude-Longitude of a Topographic Map Quadrangle

The image above shows the northeastern corner portion of the topographic map of the Juniper quadrangle, which spans the border of the states of Oregon and Washington. The name of the quadrangle comes from the name of a place on the map. Find the following information using this corner of the map:

Important information is shown at the bottom of a USGS quadrangle map, including the map scale, the contour interval, and the magnetic declination. The image above is from the bottom of the Juniper 7.5 minute quadrangle. It tells you, among other things:

One of the important tools you can use to extract the vertical information from a topographic map, and see more clearly the shape of the earth’s surface that it represents is a topographic profile.

Now that you have marked the elevation points on the profile grid, draw a smooth line connecting the data points as shown below. Note that the ends of this profile go below the 400 foot contour elevation but they do not extend to the 380 foot elevation because on the map the line of profile did not reach the 380 foot contour line. Also note that the top of the profile reaches a peak above 520 feet but less than 540 feet because the line of profile does not cross the 540 foot contour line.

Notice on the topographic profile constructed above that the peak of the hill is above 520 ft, but below 540 ft. Similarly, the ends of the profile are below 400 ft but above 380. This is consistent with the elevations of those parts of the line of profile on the map.

Note that the vertical scale on the profile is very different from the horizontal scale on the map. In this example, the map covers 0.25 miles horizontally in less distance than the profile covers 100 feet vertically. As a result, the topographic profile is greatly exaggerated vertically. In an actual view of the hill, looking at it from the side, it would not look nearly as steep as it does in the topographic profile that we have constructed.

If you drew a profile from north to south across the peak of the hill, do you think the profile would be symmetric or asymmetric?

Checklist for a Complete Topographic Profile

A properly drawn topographic profile will have the following attributes:

Use this resource to answer the questions that follow. You may stop watching at the 4:04 mark. 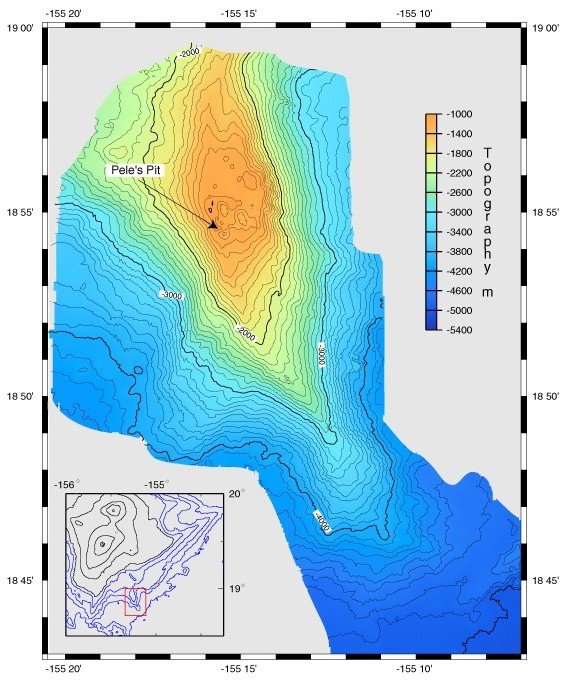 Figure 3. Loihi volcano growing on the flank of Kilauea volcano in Hawaii. Black lines in the inset show the land surface above sea level and blue lines show the topography below sea level. Click on the image to view a larger version.

A bathymetric map is like a topographic map with the contour lines representing depth below sea level, rather than height above. Numbers are low near sea level and become higher with depth.

Kilauea is the youngest volcano found above sea level in Hawaii. On the flank of Kilauea is an even younger volcano called Loihi. The bathymetric map pictured in figure 3 shows the form of Loihi.

A geologic map shows the geological features of a region (see figure 4 for an example). Rock units are color-coded and identified in a key. Faults and folds are also shown on geologic maps. The geology is superimposed on a topographic map to give a more complete view of the geology of the region.

A geologic map shows mappable rock units, mappable sediment units that cover up the rocks, and geologic structures such as faults and folds. A mappable unit of rock or sediment is one that a geologist can consistently recognize, trace across a landscape, and describe so that other people are able to recognize it and verify its presence and identity. Mappable units are shown as different colors or patterns on a base map of the geographic area. 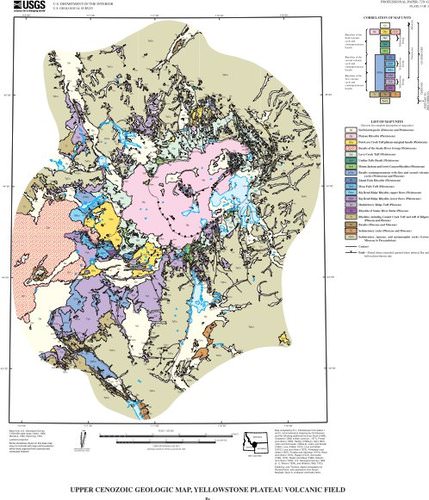 Figure 4. A geologic map of the region around Old Faithful, Yellowstone National Park.

Geologic maps are important for two reasons. First, as geologists make geologic maps and related explanations and cross-sections, they develop a theoretical understanding of the geology and geologic history of a given area.

Second, geologic maps are essential tools for practical applications such as zoning, civil engineering, and hazard assessment. Geologic maps are also vital in finding and developing geological resources, such as gravel to help build the road you drive on, oil to power the car you travel in, or aluminum to build the more fuel-efficient engine in your next vehicle. Another resource that is developed on the basis of geologic maps is groundwater, which many cities, farms, and factories rely on for the water they use.

A complete geologic map has at least two features:

Professional geologic maps usually have two other components as well:

The legend or key to a geologic map is usually printed on the same page as the map and follows a customary format. The symbol for each rock or sediment unit is shown in a box next to its name and brief description. These symbols are stacked in age sequence from oldest at the bottom to youngest at the top. The geologic era, or period, or epoch–the geologic age–is listed for each rock unit in the key. By stacking the units in age sequence from youngest at the top to oldest at the bottom, and identifying which interval of geologic time each unit belongs to, the map reader can quickly see the age of each rock or sediment unit. The map key also contains a listing and explanation of the symbols shown on the map, such as the symbols for different types of faults and folds. See the Table of Geologic Map Symbols for pictures and an overview of the map symbols, including strikes and dips, faults, folds, and an overview.

The explanations of rock units are often given in a separate pamphlet that accompanies the map. The explanations include descriptions with enough detail for any geologist to be able to recognize the units and learn how their ages were determined.

If included, cross-sections are usually printed on the same page as the geologic map. They are important accompaniments to geologic maps, especially if the map focuses on the geology of the bedrock underneath the soil and loose sediments.

A geologic cross-section is a sideways view of a slice of the earth. It shows how the different types of rock are layered or otherwise configured, and it portrays geologic structures beneath the earth’s surface, such as faults and folds. Geologic cross-sections are constructed on the basis of the geology mapped at the surface combined with an understanding of rocks in terms of physical behavior and three-dimensional structures.