There are several factors that increase the chance that a landslide will occur. Some of these we can prevent and some we cannot.

A little bit of water helps to hold grains of sand or soil together. For example, you can build a larger sand castle with slightly wet sand than with dry sand. However too much water causes the sand to flow quickly away. Rapid snow melt or rainfall adds extra water to the soil, which increases the weight of the slope and makes sediment grains lose contact with each other, allowing flow.

Layers of weak rock, such as clay, also allow more landslides. Wet clay is very slippery, which provides an easy surface for materials to slide over.

Figure 8. The slope of underlying materials must be considered when making road cuts.

If people dig into the base of a slope to create a road or a homesite, the slope may become unstable and move downhill. This is particularly dangerous when the underlying rock layers slope towards the area (figure 8).

When construction workers cut into slopes for homes or roads, they must stabilize the slope to help prevent a landslide (figure 9). Trees roots or even grasses can bind soil together. It is also a good idea to provide drainage so that the slope does not become saturated with water. 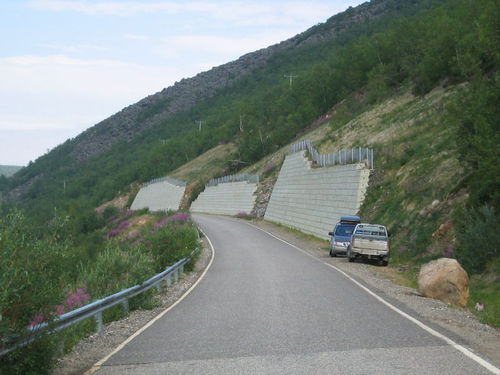 Figure 9. A rock wall stabilizes a slope that has been cut away to make a road.

An earthquake, volcanic eruption, or even just a truck going by can shake unstable ground loose and cause a slide. Skiers and hikers may disturb the snow they travel over and set off an avalanche.

A very good introduction to the topic, “Landslide 101,” is a video seen on National Geographic Videos, Environment Video, Natural Disasters, Landslides, and more.

Although there are multiple types of causes of landslides, the three that cause most of the damaging landslides around the world are these:

Slope saturation by water is a primary cause of landslides. This effect can occur in the form of intense rainfall, snowmelt, changes in ground-water levels, and water-level changes along coastlines, earth dams, and the banks of lakes, reservoirs, canals, and rivers.

Landsliding and flooding are closely allied because both are related to precipitation, runoff, and the saturation of ground by water. In addition, debris flows and mudflows usually occur in small, steep stream channels and often are mistaken for floods; in fact, these two events often occur simultaneously in the same area.

Landslides can cause flooding by forming landslide dams that block valleys and stream channels, allowing large amounts of water to back up. This causes backwater flooding and, if the dam fails, subsequent downstream flooding. Also, solid landslide debris can “bulk” or add volume and density to otherwise normal streamflow or cause channel blockages and diversions creating flood conditions or localized erosion. Landslides can also cause overtopping of reservoirs and/or reduced capacity of reservoirs to store water.

Many mountainous areas that are vulnerable to landslides have also experienced at least moderate rates of earthquake occurrence in recorded times. The occurrence of earthquakes in steep landslide-prone areas greatly increases the likelihood that landslides will occur, due to ground shaking alone or shaking-caused dilation of soil materials, which allows rapid infiltration of water. The 1964 Great Alaska Earthquake caused widespread landsliding and other ground failure, which caused most of the monetary loss due to the earthquake. Other areas of the United States, such as California and the Puget Sound region in Washington, have experienced slides, lateral spreading, and other types of ground failure due to moderate to large earthquakes. Widespread rockfalls also are caused by loosening of rocks as a result of ground shaking. Worldwide, landslides caused by earthquakes kill people and damage structures at higher rates than in the United States.

Landslides due to volcanic activity are some of the most devastating types. Volcanic lava may melt snow at a rapid rate, causing a deluge of rock, soil, ash, and water that accelerates rapidly on the steep slopes of volcanoes, devastating anything in its path. These volcanic debris flows (also known as lahars) reach great distances, once they leave the flanks of the volcano, and can damage structures in flat areas surrounding the volcanoes. The 1980 eruption of Mount St. Helens, in Washington triggered a massive landslide on the north flank of the volcano, the largest landslide in recorded times.