Reading: The Branches of Geology

As we mentioned, there are many varieties of geology. There is so much to know about our home planet that most geologists become specialists in one area. These specialties are known as branches of geology, and have specific titles. For example, a mineralogist studies minerals while a seismologist monitors earthquakes to help protect people and property from harm (figure 1).

Figure 1. (A) Mineralogists focus on all kinds of minerals. (B) Seismographs are used to measure earthquakes and pinpoint their origins. 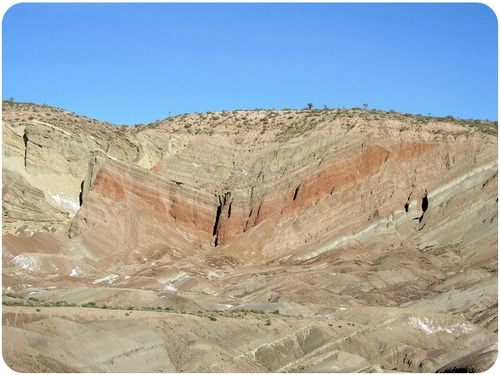 Figure 2. These folded rock layers have bent over time. Studying rock layers helps scientists to explain these layers and the geologic history of the area.

Volcanologists brave molten lava to study volcanoes. Scientists who compare the geology of other planets to Earth are planetary geologists. Some geologists study the Moon. Others look for petroleum. Still others specialize in studying soil. Some geologists can tell how old rocks are and determine how different rock layers formed (figure 2). There is probably an expert in almost anything you can think of related to Earth!

Geologists might study rivers and lakes, the underground water found between soil and rock particles, or even water that is frozen in glaciers. Earth scientists also need geographers who explore the features of Earth’s surface and work with cartographers, who make maps. Studying the layers of rock beneath the surface helps us to understand the history of planet Earth.

Some Branches of Geology

It is a subfield of inorganic chemistry, which is concerned with the properties of all the elements in the periodic table and their compounds. Inorganic chemistry investigates the characteristics of substances that are not organic, such as nonliving matter and minerals found in the Earth’s crust.

Oceanography is the study of the composition and motion of the water column and the processes which are responsible for that motion. The principal oceanographic processes influencing continental shelf waters include waves and tides as well as wind-driven and other oceanic currents. Understanding the oceanography of shelf waters and the influence this has on seabed dynamics, contributes to a wide range of activities such as the following:

Paleontologists are interested in fossils and how ancient organisms lived. Paleontology is the study of fossils and what they reveal about the history of our planet. In marine environments, microfossils collected within layers of sediment cores provide a rich source of information about the environmental history of an area.

These properties together provide a record of the mechanisms active during sediment transportation and deposition which allows the interpretation of the environmental conditions that produced a sediment deposit, either in modern settings or in the geological record.