Just as with systems of equations in two variables, we may come across an inconsistent system of equations in three variables, which means that it does not have a solution that satisfies all three equations. The equations could represent three parallel planes, two parallel planes and one intersecting plane, or three planes that intersect the other two but not at the same location. The process of elimination will result in a false statement, such as [latex]3=7[/latex] or some other contradiction.

Infinitely Many or No Solutions 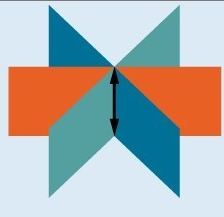 In the first example, we will see how it is possible to have a system with three variables and no solutions.

Recall that when we were solving systems with two variables, a non-true solution such as [latex]0=2[/latex] implied that there was no solution to the system.

This can happen with a system of three variables as well.

This system has no solution.

We will show another example of using elimination to solve a system in three variables that ends up having no solution in the following video.

Find the solution to the given system of three equations in three variables.

We do not need to proceed any further. The result we get when adding the two equations is an identity, [latex]0=0[/latex] which tells us that this system has an infinite number of solutions.

As shown in the figure below, two of the planes are the same and they intersect the third plane on a line. The solution set is infinite, as all points along the intersection line will satisfy all three equations. 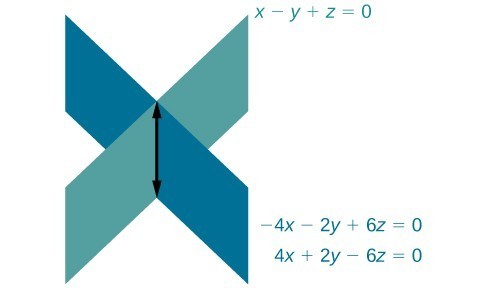 In our last video example, we show a system that has an infinite number of solutions.