The figure below illustrates how a system with three variables can have one solution. Systems that have a single solution are those which result in a solution set consisting of an ordered triple [latex]\left(x,y,z\right)[/latex]. Graphically, the ordered triple defines a point that is the intersection of three planes in space. 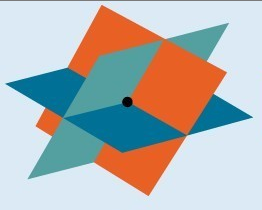 In the first example, we will determine whether an ordered triple is a solution for a system of three linear equations in three variables.

Determine whether the ordered triple [latex]\left(3,-2,1\right)[/latex] is a solution to the system.

We will check each equation by substituting in the values of the ordered triple for [latex]x,y[/latex], and [latex]z[/latex].

The ordered triple [latex]\left(3,-2,1\right)[/latex] is indeed a solution to the system.

How To: Given a linear system of three equations, solve for three unknowns

Solving a system with three variables is very similar to solving one with two variables. It is important to keep track of your work as the addition of one more equation can create more steps in the solution process.

In the example that follows, we will solve the system by first using the elimination method to solve for x and then using back-substitution.

Solve the given system.

The third equation states that [latex]z = −1[/latex], so we substitute this into the second equation to obtain a solution for [latex]y[/latex].

Now we have two of our solutions, and we can substitute them both into the first equation to solve for [latex]x[/latex].

Now we have our ordered triple; remember that where you place the solutions matters!

Analysis of the Solution:

Each of the lines in the system above represents a plane (think about a sheet of paper). If you imagine three sheets of notebook paper each representing a portion of these planes, you will start to see the complexities involved in how three such planes can intersect. Below is a sketch of the three planes. It turns out that any two of these planes intersect in a line, so our intersection point is where all three of these lines meet. 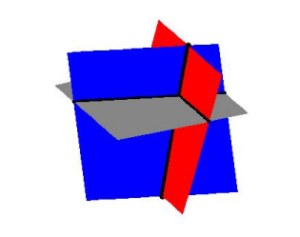 In the following video, we show another example of using back-substitution to solve a system in three variables.

In the next example, we will not start with a solution, but will need to use the method of elimination to find our first solution.

Find a solution to the following system:

We labeled the equations this time to be able to keep track of things a little more easily. The most obvious first step here is to eliminate [latex]y[/latex] by adding equations (2) and (3).

Now we can substitute the value for [latex]z[/latex] that we obtained into equation [latex](2)[/latex].

Be careful here not to get confused with a solution of [latex]y = 0[/latex] and an inconsistent solution.  It is ok for variables to equal [latex]0[/latex].

In the following videos, we show more examples of the algebra you may encounter when solving systems with three variables.