In our first video, we show the process of adding mixed numbers with different denominators using pattern blocks.

Solution:
Since the denominators are different, we rewrite the fractions as equivalent fractions with the LCD, [latex]6[/latex]. Then we will add and simplify. 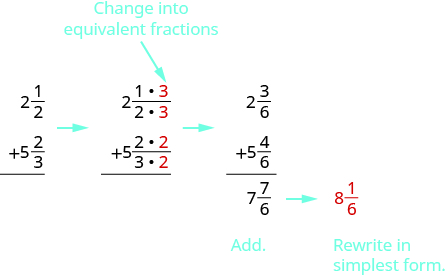 We write the answer as a mixed number because we were given mixed numbers in the problem.

Solution
Since the denominators of the fractions are different, we will rewrite them as equivalent fractions with the LCD [latex]8[/latex]. Once in that form, we will subtract. But we will need to borrow [latex]1[/latex] first.

In the following video we show four more examples of adding and subtracting mixed numbers that have both like and unlike denominators. The method used for these examples employs improper fractions.