Before we get started, here is some important terminology that will help you understand the concepts about working with fractions in this section.

Many different words are used by math textbooks and teachers to provide students with instructions on what they are to do with a given problem. For example, you may see instructions such as “Find” or “Simplify” in the example in this module. It is important to understand what these words mean so you can successfully work through the problems in this course. Here is a short list of the words you may see that can help you know how to work through the problems in this module.

The “parts of a whole” concept can be modeled with pizzas and pizza slices. For example, imagine a pizza is cut into 4 pieces, and someone takes 1 piece. Now, [latex]\frac{1}{4}[/latex] of the pizza is gone and [latex]\frac{3}{4}[/latex] remains. Note that both of these fractions have a denominator of 4, which refers to the number of slices the whole pizza has been cut into. What if you have another pizza that had been cut into 8 equal parts and 3 of those parts were gone, leaving [latex]\frac{5}{8}[/latex]? 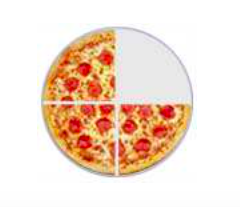 How can you describe the total amount of pizza that is left with one number rather than two different fractions? You need a common denominator, technically called the least common multiple. Remember that if a number is a multiple of another, you can divide them and have no remainder.

The smallest multiple they have in common will be the common denominator for the two!

Show Solution
Rewrite the fractions [latex] \frac{3}{4}[/latex] and [latex]\frac{5}{8}[/latex] as fractions with a least common denominator.

The least common denominator is 8—the smallest multiple they have in common.

Rewrite [latex] \frac{3}{4}[/latex] with a denominator of 8. You have to multiply both the top and bottom by 2 so you don’t change the relationship between them.

We don’t need to rewrite [latex] \frac{5}{8}[/latex] since it already has the common denominator.

Adding Fractions with Unlike Denominators

Often, if the answer to a problem is a fraction, you will be asked to write it in lowest terms. This is a common convention used in mathematics, similar to starting a sentence with a capital letter and ending it with a period. In this course, we will not go into great detail about methods for reducing fractions because there are many. The process of simplifying a fraction is often called reducing the fraction. We can simplify by canceling (dividing) the common factors in a fraction’s numerator and denominator.  We can do this because a fraction represents division.

For example, to simplify [latex]\frac{6}{9}[/latex] you can rewrite 6 and 9 using the smallest factors possible as follows:

Since there is a 3 in both the numerator and denominator, and fractions can be considered division, we can divide the 3 in the top by the 3 in the bottom to reduce to 1.

In the next example you are shown how to add two fractions with different denominators, then simplify the answer.

Rewrite each fraction with a denominator of 15.

Add the fractions by adding the numerators and keeping the denominator the same. Make sure the fraction cannot be simplified.

Rewrite each fraction with a denominator of 21.

Add the fractions by adding the numerators and keeping the denominator the same. Make sure the fraction cannot be simplified.

In the following video you will see an example of how to add two fractions with different denominators.

You can also add more than two fractions as long as you first find a common denominator for all of them. An example of a sum of three fractions is shown below. In this example, you will use the prime factorization method to find the LCM.

What makes this example different than the previous ones? Use the box below to write down a few thoughts about how you would add three fractions with different denominators together.

Rewrite each fraction with a denominator of 24.

Add the fractions by adding the numerators and keeping the denominator the same.

Write the improper fraction as a mixed number and simplify the fraction.

When you subtract fractions, you must think about whether they have a common denominator, just like with adding fractions. Below are some examples of subtracting fractions whose denominators are not alike.

Rewrite each fraction as an equivalent fraction with a denominator of 30.

Subtract the numerators. Simplify the answer if needed.

Rewrite each fraction with a denominator of 12.

Subtract the fractions. Simplify the answer if needed.

In the following video you will see an example of how to subtract fractions with unlike denominators.