Now, to find how many people have not used either service, we’re looking for the cardinality of (F ⋃ T)c .

a note about the cardinality properties

You’ve already seen how to use the properties of real numbers and how they can be written as “templates” or “forms” in the general case. The properties of cardinality, although they are not the same as number properties, can be learned in a similar way, by speaking them aloud, writing them out repeatedly, using flashcards, and doing practice problems with them.

Remember to employ more than one study strategy along with repetition and practice to learn unfamiliar mathematical concepts.

How was that done?

In the demonstration above, the first cardinality property was rewritten by using the property of equality as you know it from solving equations. 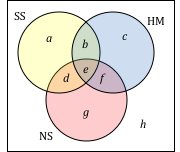 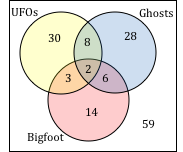