ordered pairs as coordinates for data points in the plane

Recall that ordered pairs in the form [latex]\left(x, y\right)[/latex] give information about a point in the plane.

The graph of an equation contains a set of such points having input, [latex]x[/latex]-values and corresponding output, [latex]y[/latex]-values. Each ordered pair (data point) on the graph of such a mathematical relation satisfies the equation of the relation (makes it a true statement when substituted for the variables). 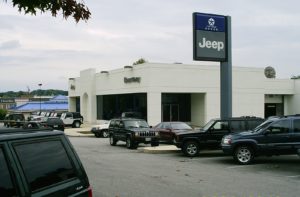 For example, say you purchase a brand-new car from a dealership. The value of your car begins to decline as soon as you sign the sales contract and drive the car off the lot. Notwithstanding other variables such as vehicle damage or economic fluctuations, the value of your new car going forward will be largely dependent upon how long you’ve owned it. This type of decrease in value over time is called depreciation.

Populations are also dependent upon time. It is not difficult to visualize growth in the population of people on the Earth over decades and centuries or of a number of bacteria in a petri dish over minutes and hours. Other types of growth depend on quantities other than time. For example, revenue, the amount of money collected when you sell an item, depends upon the number of items sold. The growth (or decay, as in the value of your new car over time) in each of these situations can be modeled mathematically. 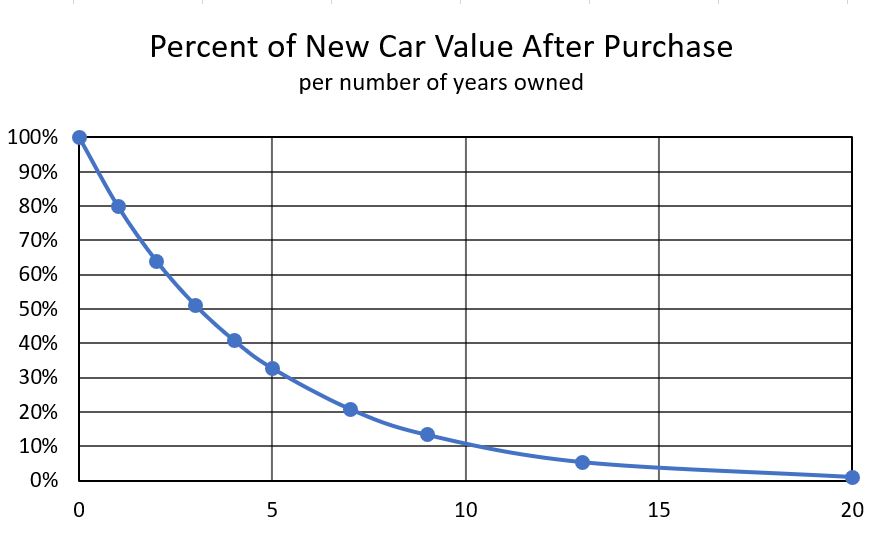 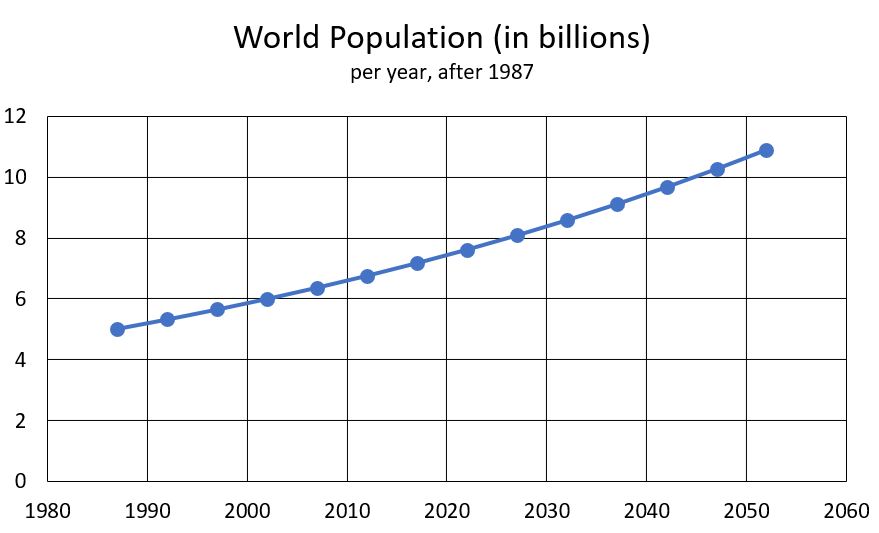 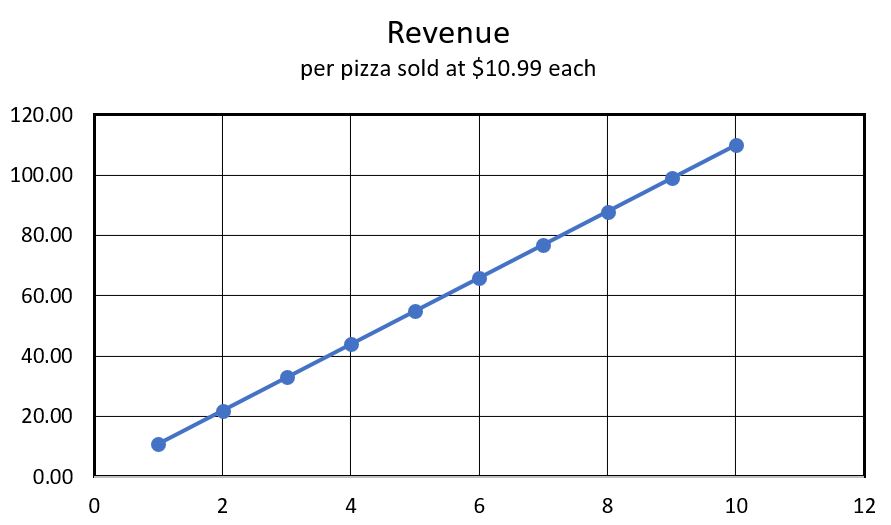 In each of these situations the independent variable, representing the input quantity (time in years or number of pizzas sold) is graphed on the horizontal axis while the dependent variable, representing the output quantity (percent of new car value, population, or revenue) is graphed on the vertical axis. Each point on the graph represents a correspondence between one piece of information from the set of input values with one piece of information from the set of output values. This correspondence, called a relation, is written in the form of an ordered pair as (input, output) and it satisfies the mathematical statement of the relation between the two quantities described by the equation. A well-defined relation with no ambiguity regarding the output variable is also called a function.

The notation [latex]y=f\left(x\right)[/latex] defines a function named [latex]f[/latex]. This is read as “[latex]y[/latex] is a function of [latex]x[/latex].” The letter [latex]x[/latex] represents the input value, or independent variable. The letter [latex]y[/latex] or [latex]f\left(x\right)[/latex], represents the output value, or dependent variable.

There are several terms used to denote the coordinates of an ordered pair, (input, output), depending on the discipline applying the math or the particular situation to which it is being applied. You may see them variously referred to as any of the following:

We don’t know what the equation is when we begin to build a model. Instead, we use what we know of the nature of the situation to choose a type of equation or function to apply, and what we observe in the data of the situation to write a particular equation that best fits it. Some situations will be best approximated by linear relationships, that is by equations of lines, while others will require a non-linear relationship such as an exponential function. You will become familiar with linear, exponential, and logistic modeling in this section but you should know that these three types of relationships are just a few of the many types of equations that can be used to model real-world situations.

Let’s begin to get familiar with the tools of modeling while spending some time with the vocabulary and processes of modeling.

A scatterplot is a graph of plotted points obtained from the real-world situation of interest. Recall an example from the linear (algebraic) growth section of the previous module in which data had been collected on gasoline consumption in the US between the years 1992 and 2004.

In the solution to that example, you were shown a graph plotted with data points in the form (year, consumption). Then you were asked to write the recursive and explicit forms to find a model for the data and use it to answer a question. It is important to understand how such a model can be built by hand. As the situations into which we seek insight become more complicated, though, technology can be of tremendous assistance. This module will help you apply your understanding of the characteristics of models by using a spreadsheet to handle the task of developing models fairly quickly and neatly. The examples in this module will use the Microsoft Excel spreadsheet but you can also use an open source spreadsheet such as Apache OpenOffice Calc or Google Sheets. We’ll walk through the basics using the gasoline consumption example.

Open a new blank worksheet and save it somewhere safe. You should save your work frequently as you go or turn on an auto-save feature if available. We’ll begin by typing the data from the gasoline consumption example into two columns, one labeled year and the other labeled consumption. 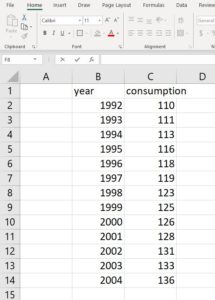 Click and drag to highlight cells B1 and C1 containing the words “year” and “consumption” then drag downward to highlight all the data points you entered.

You’ve just created a scatterplot of known data points in the gas consumption scenario. This scatterplot will make a nice presentation in a report or a display, but we’ll need to make an adjustment to the input data to be able to obtain an meaningful equation to use as a model. We’ll see how to choose an equation type to use to model the situation next.

Trendlines in a spreadsheet chart represent graphs that nicely fit the data of your scatterplot, like the line of best fit you discovered when you completed this gasoline consumption scenario in the previous module. In that example, you visually inspected the scatterplot for a pattern and noticed that the data very nearly approximated a straight line. You chose two data points and used them to write the recursive and explicit forms of the linear relationship present in the data. Starting with 111 billion gallons consumed in the year 1993, you found the slope to be [latex]2.2[/latex] billion gallons of gas consumed per year: [latex]P_{n}=111+2.2n[/latex].

We need to adjust the data that our chart is using for the input values. We currently have a list of years in the input column, which yields a nice presentation of the data but, If we wish to obtain an equation to use as a model for this situation, we need to change the perspective of our input to get a more meaningful mathematical statement. We’ll need to change the input information from years to the number of years after a starting year.

Let’s see what equation we obtain when we let Excel choose the line that best fits the data. In this example, we will obtain an unexpected result in step 1, then we’ll adjust the chart to fix it in step 2.

Step 1: Selecting the trendline from a menu.

Click on the chart you made previously then click on the topmost style box that appears, the one with a plus-sign in it, to open the Chart Elements box. Hover your mouse over the Trendline choice, click the right-arrow, then choose More Options… to open the Format Trendline pane. 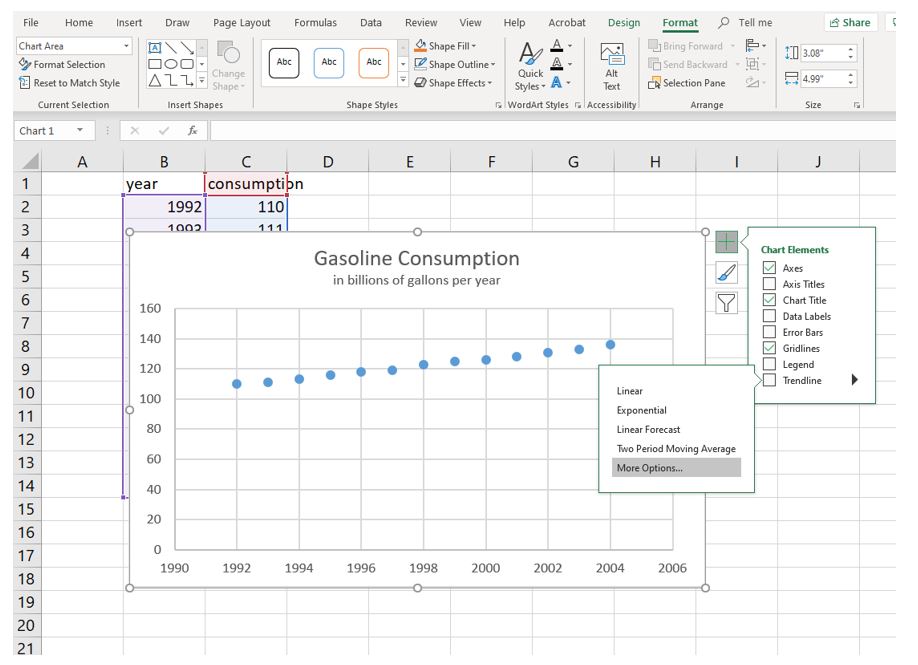 When you’ve made those choices it should look like the image below. You can close the Format Trendline pane at this point. Excel places the equation and R-Squared value directly over the scatterplot, making it difficult to read. You can click the textbox containing them and move it down if you wish. 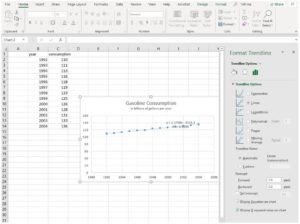 Excel is reading the input values as numbers, not as we are perceiving them, as years. That is, the software interprets the number 1993 as one thousand nine-hundred ninety-three years after the starting year, year zero. We want it to read 1993 as the first input so that we have a starting value of approximately 111. We’ll need to change our data from years to years since 1993 to match the equation we obtained earlier. Recall that you left column A empty in the beginning. Let’s use it now.

As you become more familiar working in a spreadsheet, you’ll find using technology to analyze situations numerically is generally more efficient than doing it by hand. But the technology can only act as a tool for your understanding. Without your knowledge of the process of modeling and why it works, the tool is likely to reveal unexpected and confusing results.