Percent of a Whole

Percents are the ratio of a number and 100. Percents are used in many different applications. Percents are used widely to describe how something changed. For example, you may have heard that the amount of rainfall this month had decreased by 12% from last year, or that the number of jobless claims has increase by 5% this quarter over last quarter. 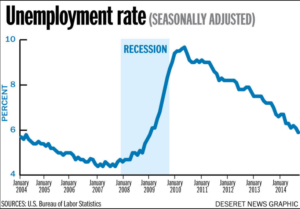 We regularly use this kind of language to quickly describe how much something increased or decreased over time or between significant events.

Likewise, if we wanted to find 25% of 14 gallons, we could find this by multiplying, but first we would need to convert the 25% to a decimal:

Finding a Percent of a Whole

To find a percent of a whole,

Show Solution
Write as a decimal. Move the decimal point two places to the left.

Multiply the decimal form of the percent by the whole number.

The following video contains an example that is similar to the one above.

From the previous example, we can identify three important parts to finding the percent of a whole:

The following examples show how to identify the three parts: the percent, the base, and the amount.

Percent: The percent is the number with the % symbol: 20%.

Base: The base is the whole amount, which in this case is unknown.

Amount: The amount based on the percent is 30.

The previous problem states that 30 is a portion of another number. That means 30 is the amount. Note that this problem could be rewritten: 20% of what number is 30?

Percent: The percent is unknown, because the problem states “what percent?”.

Base: The base is the whole amount, so the base is 30.

Amount: The amount is a portion of the whole, which is 3 in this case.

Percent: The percent is known

Base: The base is the whole amount, so the base is 45.

Amount: The amount is a portion of the whole, which is what we want to identify.

The following video provides more examples that describe how to identify the percent, amount, and base in a percent problem.

In the next section, you will use the parts of a percent problem to find the percent increase or decrease of a quantity by writing and solving equations.

Percent problems can be solved by writing equations. An equation uses an equal sign (=) to show that two mathematical expressions have the same value.

Percents are fractions, and just like fractions, when finding a percent (or fraction, or portion) of another amount, you multiply.

In the previous section, we identified three important parts to finding the percent of a whole:

Using these parts, we can define equations that will help us answer percent problems.

Percent of the Base is the Amount.

Write an equation that represents the following problem.

Show Solution
Rewrite the problem in the form “percent of base is amount.”

Identify the percent, the base, and the amount.

Write the percent equation. using n for the base, which is the unknown value.

Once you have an equation, you can solve it and find the unknown value. For example, to solve
[latex]20%\cdot{n}=30[/latex]

You can solve this by writing the percent as a decimal or fraction and then dividing.

Show Solution
Identify the percent, base, and amount.

Write the percent equation: Percent [latex]\cdot[/latex] Base = Amount. Use n for the unknown (percent).

Divide to undo the multiplication of n times 72.

In the following video example, you are shown how to use the percent equation to find the base in a percent problem.

Show Solution
Identify the percent, the base, and the amount.

The amount is unknown, so use n.

Write the percent as a decimal by moving the decimal point two places to the left.