If you wanted to power the city of Lincoln, Nebraska using wind power, how many wind turbines would you need to install? Questions like these can be answered using rates and proportions. 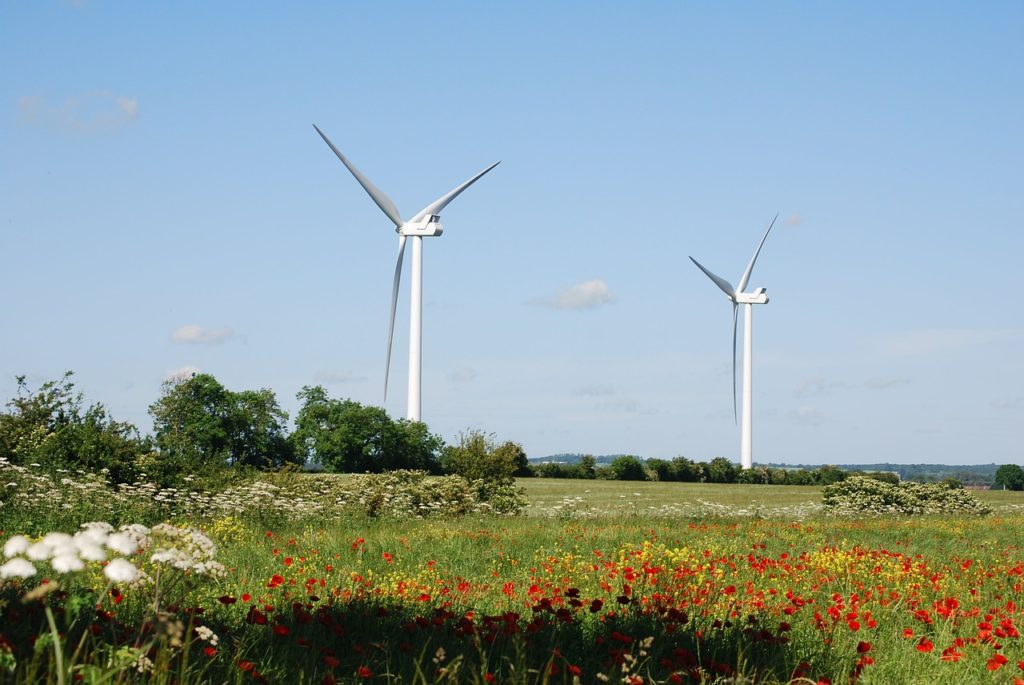 A rate is the ratio (fraction) of two quantities.

A unit rate is a rate with a denominator of one.

The Equivalent Fractions Property states that

Your car can drive 300 miles on a tank of 15 gallons. Express this as a rate.

A proportion equation is an equation showing the equivalence of two rates or ratios.

For an overview on rates and proportions, using the examples on this page, view the following video.

Recall that we can use letters we call variables to “stand in” for unknown quantities. Then we can use the properties of equality to isolate the variable on one side of the equation. Once we have accomplished that, we say that we have “solved the equation for the variable.”

In the example below, you are asked to solve the proportion (an equality given between two fractions) for the unknown value [latex]x[/latex].

We see that the variable we wish to isolate is being divided by 15. We can reverse that by multiplying on both sides by 15.

Solve the proportion [latex]\displaystyle\frac{5}{3}=\frac{x}{6}[/latex] for the unknown value x.

Show Solution
This proportion is asking us to find a fraction with denominator 6 that is equivalent to the fraction[latex]\displaystyle\frac{5}{3}[/latex]. We can solve this by multiplying both sides of the equation by 6, giving [latex]\displaystyle{x}=\frac{5}{3}\cdot6=10[/latex].

A map scale indicates that ½ inch on the map corresponds with 3 real miles. How many miles apart are two cities that are [latex]\displaystyle{2}\frac{1}{4}[/latex] inches apart on the map?

Show Solution
We can set up a proportion by setting equal two [latex]\displaystyle\frac{\text{map inches}}{\text{real miles}}[/latex] rates, and introducing a variable, x, to represent the unknown quantity—the mile distance between the cities.

Many proportion problems can also be solved using dimensional analysis, the process of multiplying a quantity by rates to change the units.

However, we earlier found that 300 miles on 15 gallons gives a rate of 20 miles per gallon. If we multiply the given 40 gallon quantity by this rate, the gallons unit “cancels” and we’re left with a number of miles:

Notice if instead we were asked “how many gallons are needed to drive 50 miles?” we could answer this question by inverting the 20 mile per gallon rate so that the miles unit cancels and we’re left with gallons:

A worked example of this last question can be found in the following video.

A bicycle is traveling at 15 miles per hour. How many feet will it cover in 20 seconds?

Now we can multiply by the 15 miles/hr

Now we can convert to feet

We could have also done this entire calculation in one long set of products:

View the following video to see this problem worked through.

In this case, while the width the room has doubled, the area has quadrupled. Since the number of tiles needed corresponds with the area of the floor, not the width, 400 tiles will be needed. We could find this using a proportion based on the areas of the rooms:

Other quantities just don’t scale proportionally at all.

Suppose a small company spends $1000 on an advertising campaign, and gains 100 new customers from it. How many new customers should they expect if they spend $10,000?

Show Solution
While it is tempting to say that they will gain 1000 new customers, it is likely that additional advertising will be less effective than the initial advertising. For example, if the company is a hot tub store, there are likely only a fixed number of people interested in buying a hot tub, so there might not even be 1000 people in the town who would be potential customers.

Matters of scale in this example and the previous one are explained in more detail here.

Sometimes when working with rates, proportions, and percents, the process can be made more challenging by the magnitude of the numbers involved. Sometimes, large numbers are just difficult to comprehend.

The 2010 U.S. military budget was $683.7 billion. To gain perspective on how much money this is, answer the following questions.

Here we have a very large number, about $683,700,000,000 written out. Of course, imagining a billion dollars is very difficult, so it can help to compare it to other quantities.

Compare the electricity consumption per capita in China to the rate in Japan.

Computing the consumption per capita for each country:

While China uses more than 5 times the electricity of Japan overall, because the population of Japan is so much smaller, it turns out Japan uses almost twice the electricity per person compared to China.

Working with large numbers is examined in more detail in this video.