A thing is not necessarily true because badly uttered, nor false because spoken magnificently. – Saint Augustine 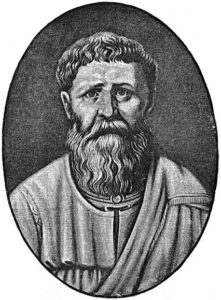 The Middle Ages (400–1400 A.D.) followed the Second Sophistic movement, wrote Foss,[1] and during this period, rhetoric became aligned with preaching, letter writing, and education. As Christianity grew in power, rhetoric was condemned as a pagan art; many Christians believed that the rhetorical ideas expressed by the pagans of classical Greece and Rome should not be studied and that one’s belief in Christian truth brought with it the ability to communicate that truth effectively. St. Augustine had been a teacher of rhetoric before converting to Christianity in A.D. 386, and is considered to be the only major thinker on rhetoric associated with the Middle Ages. Rhetoric played a role in education in the Middle Ages as one of the three great liberal arts. Along with logic and grammar, rhetoric is considered part of the trivium of learning, similar in function to the West’s three R’s of reading, writing and arithmetic today.

The clearest bridge to the Middle Ages, according to Murphy and Katula,[2] is found in the De doctrina christiana of Saint Augustine (354–430 A.D.). Augustine divided his work into four books. The first three deal with “sign,” or “that which is used to signify something else.”[3] For example, language was for Augustine a set of conventional signs which human beings agree to show each other to convey ideas and feelings. He posited that the world itself is a sign of God. Augustine argued that human beings needed to know the nature of signs in order to understand the language of the Bible, and then needed to understand rhetoric in order to explain the Christian message, and then teach it to others. He believed every Christian was obligated to spread Christ’s message (e.g. Matthew 18:20), thus, rhetoric became an obligation to every Christian.

His influence prevailed, and the Christian Church adopted the Ciceronian rhetoric as a guide to preachers. Saint Augustine is sometimes called “the last classical man and the first medieval man.” With respect to rhetoric, Foss et al.,[4] stated that this is certainly true, and it is possible to see him an agent of communication from one age to another.