The Roman Republic’s Adoption of Rhetoric

As Athens declined in power, a new force emerged, the Roman Republic. The Senate was the only permanent governing body and the only body where debate was possible. In order to debate, one had to know the persuasive art of rhetoric and oratory, or public speaking. 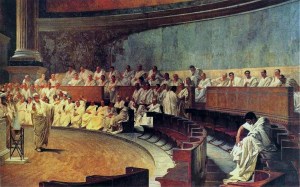 Greek rhetoric appeared in republican Rome in the middle of the second century B.C. The teachers of rhetoric were Greek, and they taught in both Greek and Latin. Eventually Roman teachers were produced. The remarkable thing about Roman rhetorical theory, wrote Murphy and Katula,[1] is that it appeared for the first time in its fullest form around 90 B.C., with very little direct evidence as to how it developed into its completed form. Sometime after Aristotle, writers refined and identified the subject of rhetoric into five parts—Invention, Arrangement, Style, Memory, and Delivery. These five canons are still a part of public speaking in education today. Two Romans stand out as quintessential figures of Roman rhetoric, Cicero and Quintilian.

Marcus Tullius Cicero was born on January 3, 106 BC and was murdered on December 7, 43 BC. His life coincided with the decline and fall of the Roman Republic, and he was an important participant in many of the significant political events of his time. He is considered to be the greatest of the Roman orators, and was, among other things, a lawyer, politician, and philosopher.

In Cicero’s Rome the government eventually came under the control of a well-trained ruling class. Legal training became an integral part of this ruling class. Roman rhetoric provided rules for all forms of oratory; however, legal speaking became the primary emphasis of textbooks.

Cicero is noted for writing the De Inventione when he was about twenty years old. It is important because it gives us insight into the general nature of rhetorical instruction in the first century B.C. And later in life, as a more mature individual, he wrote the De Oratore, which he compared and contrasted to the De Inventione. Cicero’s contributions to the theory of oral discourse included the belief that the orator must have a firm foundation of general knowledge. Cicero believed that the perfect orator should be able to speak wisely and eloquently on any subject with a dignified, restrained delivery. Corbett wrote that “Cicero felt that the perfect orator had to be conversant with many subjects. In order to invent his arguments, the perfect orator must have a command of a wide range of knowledge.”[2] Cicero despised the shallowness of orators who depended exclusively on perfect diction and elegant words that lacked substance. His ideal person was the philosopher-statesman-learned orator who used rhetoric to mold public opinion.

It is not by muscle, speed, or physical dexterity that great things are achieved, but by reflection, force of character, and judgment. – Marcus Tullius Cicero

Cicero firmly held that oratory was more than legal pleadings or a school subject. Cicero considered oratory to be the highest form of intellectual activity and an instrument indispensable for the welfare of the state. In addition, he combined the three functions of the orator to the three levels of style. He was able to provide his colleagues with a broad interpretation of Atticism, and he revived the best of the Greek theoreticians and practitioners of oratory. It can be said that Cicero was an idealist. As a student of Greek rhetoric, he encouraged his contemporaries to practice the same ideals, ethics and standards of the past. His primary focus was to adapt Hellenic (ancient Greece) doctrine to the needs of Rome. During Cicero’s time, Rome had become a place where the free expression of ideas was no longer tolerated. The government had been corrupted. 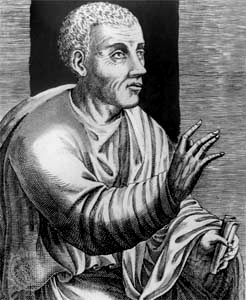 Marcus Fabius Quintilianus (A.D. 35–95) was a celebrated orator, rhetorician, Latin teacher and writer who promoted rhetorical theory from ancient Greece and from the height of Roman rhetoric. His work on rhetoric, the Institutio Oratoria, is an exhaustive volume of twelve books and was a major contribution to educational theory and literary criticism. Many later rhetoricians, especially from the Renaissance, derived their rhetorical theory directly from this text.

The mind is exercised by the variety and multiplicity of the subject matter, while the character is molded by the contemplation of virtue and vice. – Quintilian

During the hundred years plus which elapsed between the death of Cicero and the birth of Quintilian, education had vastly spread all over the Roman Empire, with rhetoric as the most important part of education. But by Quintilian’s time[3], the popular trend in oratory was not rhetoric in the traditional sense, rather it was called “silver Latin,” a style that favored ornate embellishment over clarity and precision. During this time rhetoric was primarily composed of three aspects: the theoretical (contemplating new rhetorical methods), the educational (teaching students the five canons), and the practical (courtroom and political speeches).

Quintilian’s Institutio Oratoria may be read as a reaction against this trend; it advocated a return to simpler and clearer language. Gwynn wrote that Quintilian adopted Cicero’s oratory prowess as the model for this return to rhetorical tradition; because during the previous century, Cicero’s far more concise style was the standard.[4] Quintilian disliked the excessive ornamentation popular in the oratory style of his contemporaries (silver Latin). Quintilian believed that deviating from natural language and the natural order of thought in pursuit of an over-elaborate style created confusion in both the orator and his audience.

Much of this work dealt with the technical aspects of rhetoric and the Institutio Oratoria stood—along with Aristotle’s Rhetoric and Cicero’s writing—as one of the ancient world’s greatest works on rhetoric. According to Barrett,[5] he organized the practice of oratory into five canons: inventio (discovery of arguments), dispositio (arrangement of arguments), elocutio (expression or style), memoria (memorization), and pronuntiatio (delivery). This thorough presentation reflects his extensive experience as an orator and teacher, and in many ways the work can be seen as the culmination of Greek and Roman rhetorical theory.

Quintilian emphasized the value of rhetoric as a moral force in the community. “My aim,” said Quintilian, “is the education of the perfect orator.”[6] Since the function of the orator is to advance the cause of truth and good government, Quintilian said he must by definition be a good man morally and not just an effective speaker. According to Gwynn this was a revolutionary doctrine in the development of rhetoric: Aristotle saw rhetoric as morally neutral, a human tool whose moral character resided in the speaker not the art.[7] Quintilian saw rhetoric as a means for a better self- governing society; to make moral goodness integral to oratory.

How does Quintilian’s perspective on rhetoric compare to Plato, Aristotle, and Cicero? Plato defined rhetoric as a philosophy rather than an art, an unnecessary tool. Plato was concerned more with the truth than Quintilian, while Aristotle believed that rhetoric was “finding the available means of persuasion.” Quintilian challenged this definition because he felt that Aristotle had omitted the fact that anyone, not just the learned, can persuade. To Quintilian, rhetoric was “the good man speaking well.”[8] 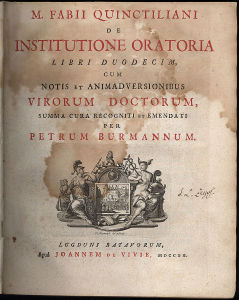 Quintilian’s system of rhetorical education aimed at the creation of the ideal Roman orator: a virtuous, efficient, courageous, eloquent man. His goal was to prepare an orator-philosopher-statesman who could combine wisdom with persuasion for the sake of regulating the state. It was this insistence on the intellectual and moral training of the aspiring orator that made Cicero and Quintilian the two most potent classical influences on rhetorical education in England and America.

From the death of Quintilian (about A.D. 100) until the fall of the Roman Empire (A.D. 410), very little was contributed to the rhetorical doctrine. A Greek cultural movement in the second and third centuries A.D. (although some sources place this movement during the fourth and fifth centuries A.D.) called the “Second Sophistic,” was centered in Athens.[9] However, the art of oratory focused more on excessive performance (delivery) and professional speech making rather than the art of intellectual development. There isn’t a total gap between Quintilian and medieval rhetoric. This period produced works by Victorinus, who wrote a systematic commentary on Cicero’s rhetoric, Aquila Romanus, Fortunatianus, and Sulpitius Victor. They are mentioned because they reflect the type of rhetorical education common to the third and fourth centuries and provide a bridge between classical and medieval rhetoric.