You can use a coordinate plane to plot points and map various relationships, such as the relationship between an object’s distance and the elapsed time. Many mathematical relationships are linear relationships.

Look at the five ordered pairs (and their x– and y-coordinates) below. Do you see any pattern to the location of the points? If this pattern continued, what other points could be on the line?

You probably identified that if this pattern continued the next ordered pair would be at (5, 10). This makes sense because the point (5, 10) “lines up” with the other points in the series—it is on the same line as the others. Applying the same logic, you may identify that the ordered pairs (6, 12) and (7, 14) would also belong if this coordinate plane were larger; they will line up with the other points as well.

Notice that each y-coordinate is twice the corresponding x-value. All of these x- and y-values follow the same pattern, and, when placed on a coordinate plane, they form a line. 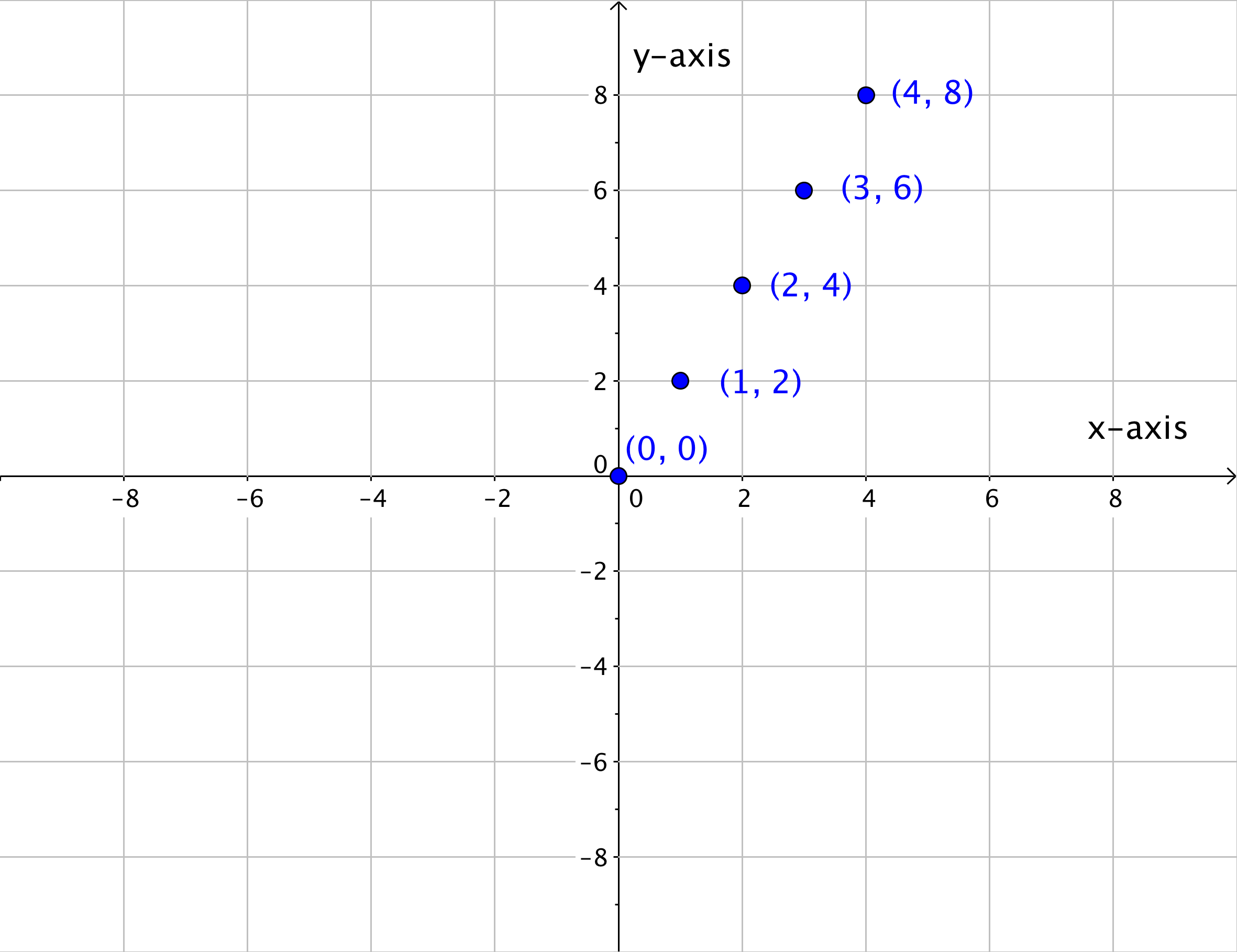 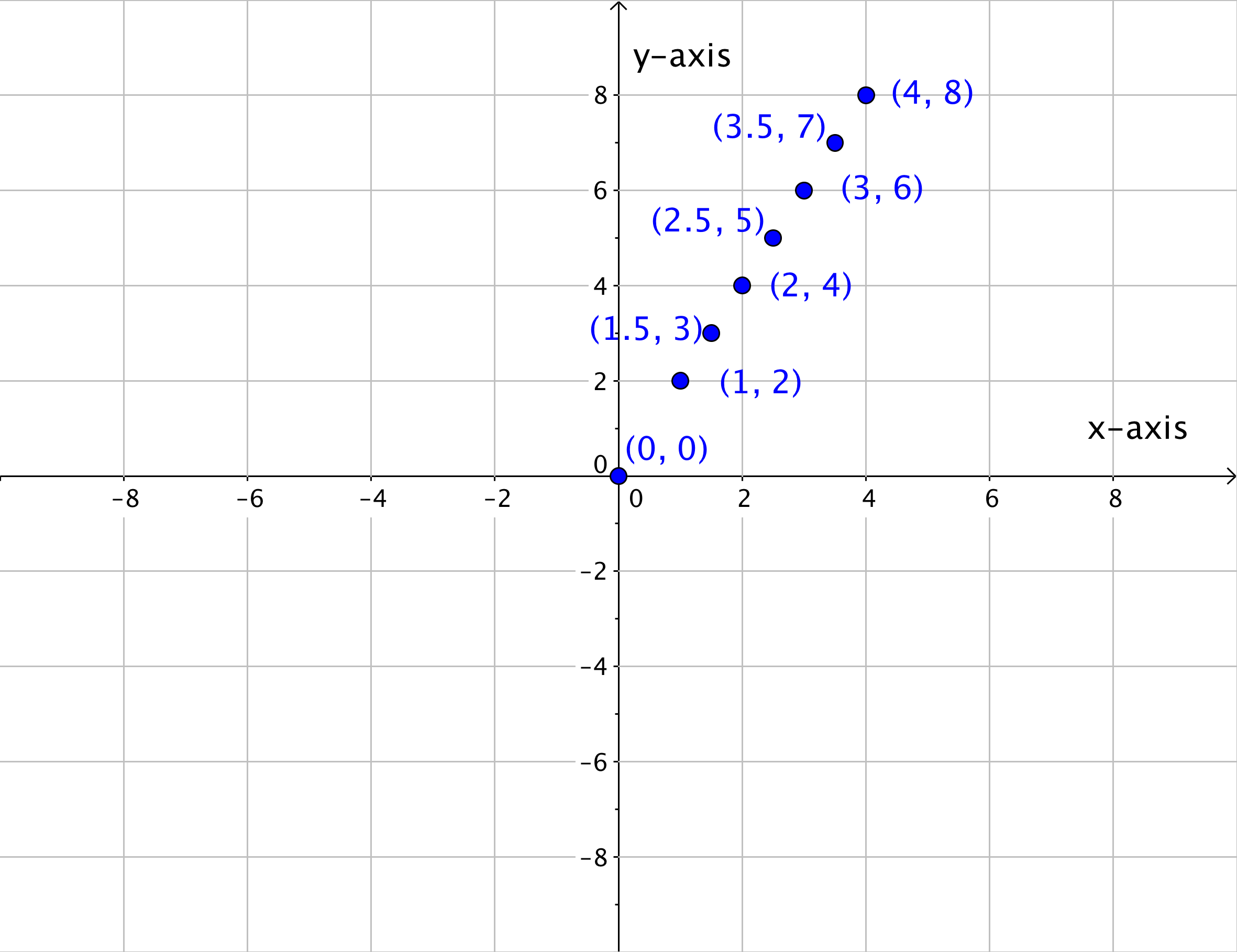 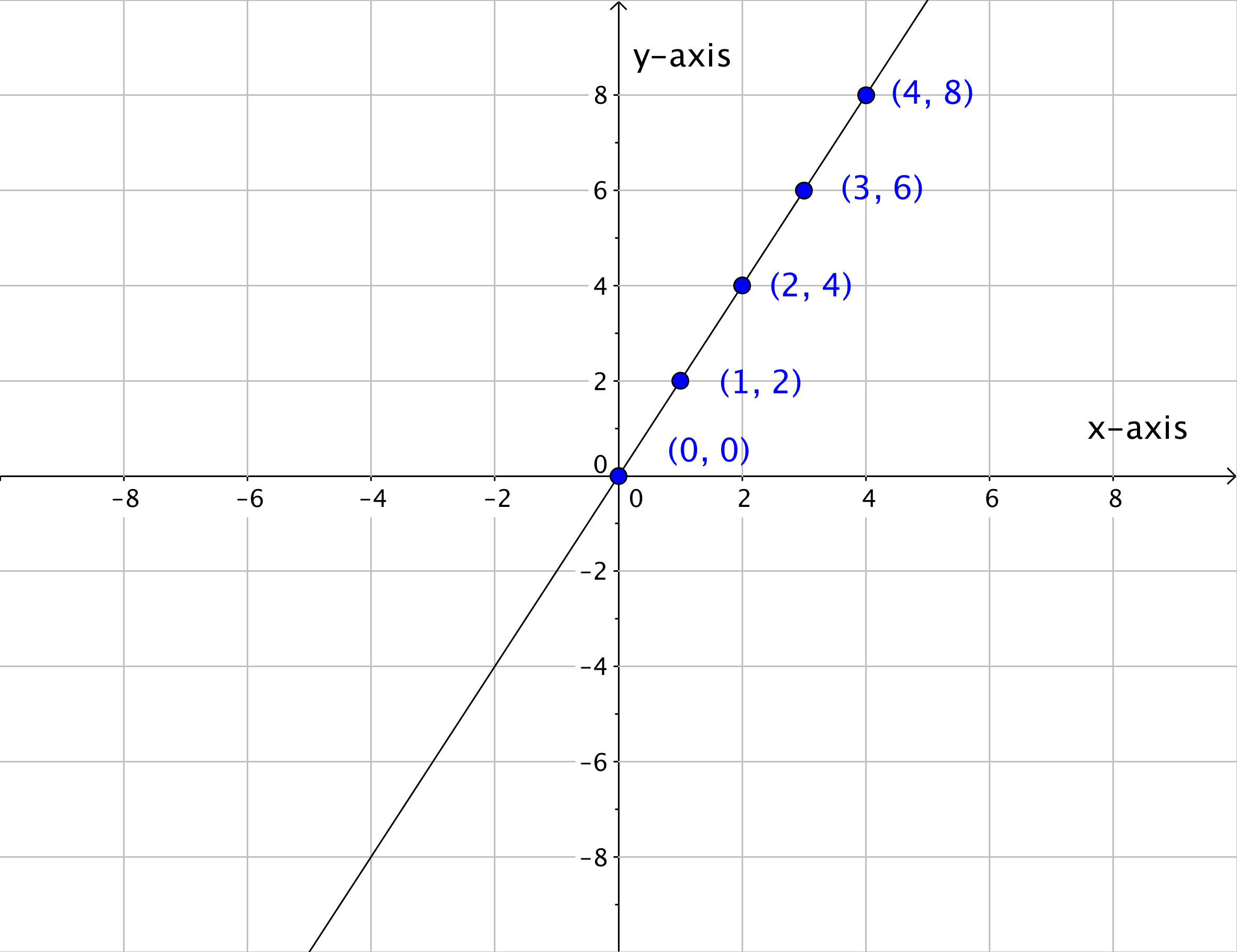 You can think of a line as a collection of an infinite number of individual points that share the same mathematical relationship. In this case, the relationship is that the y-value is twice the x-value.

There are several ways to create a graph of a linear equation. One way is to create a table of values for x and y, and then plot these ordered pairs on the coordinate plane. Two points are enough to determine a line. However, it’s always a good idea to plot more than two points to avoid possible errors.

Show Solution
Evaluate [latex]y=−1.5x[/latex] for different values of x, and create a table of corresponding x and y values.

Since the coefficient of x is [latex]−1.5[/latex], it is convenient to choose multiples of 2 for x. This ensures that y is an integer, and makes the line easier to graph. 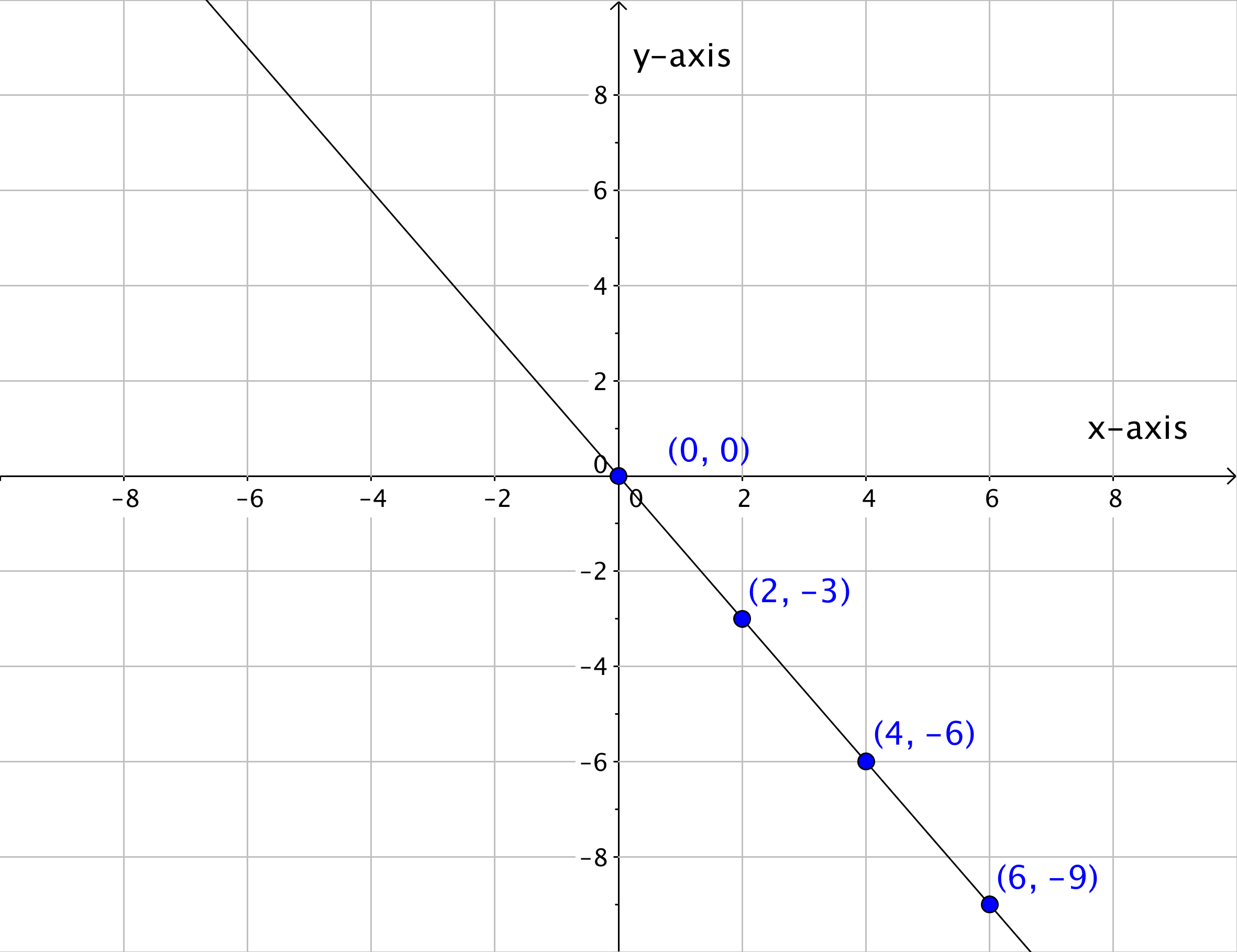 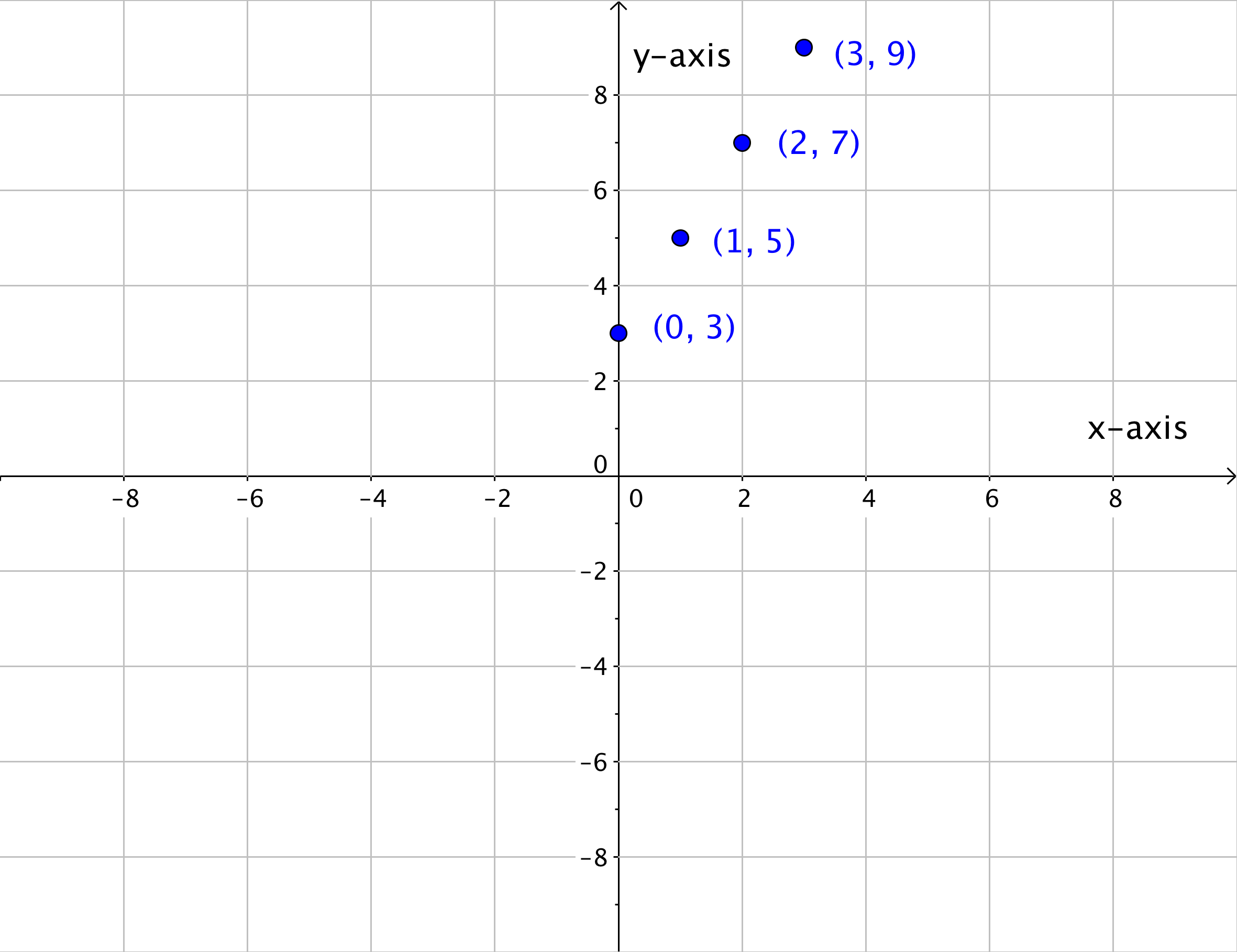 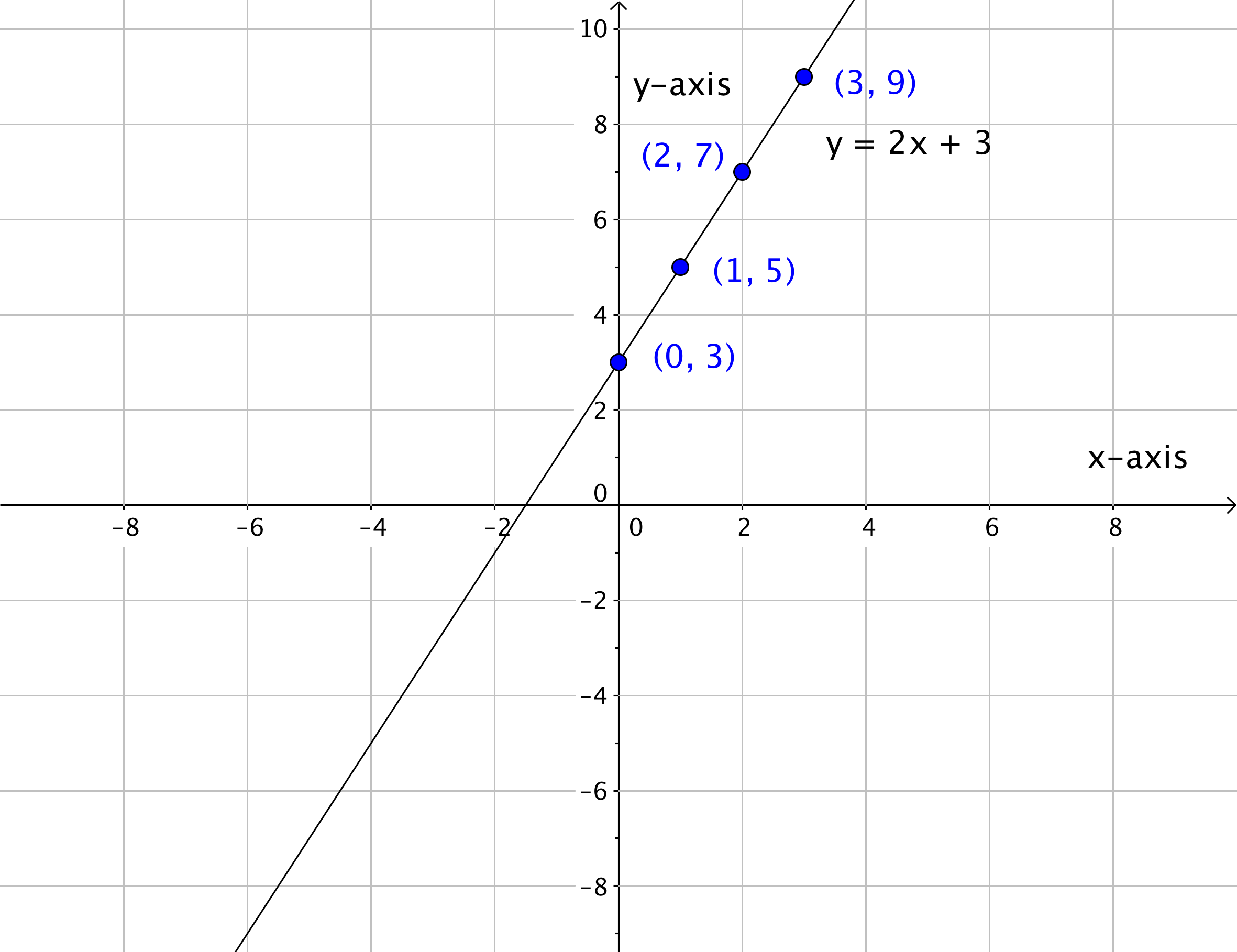 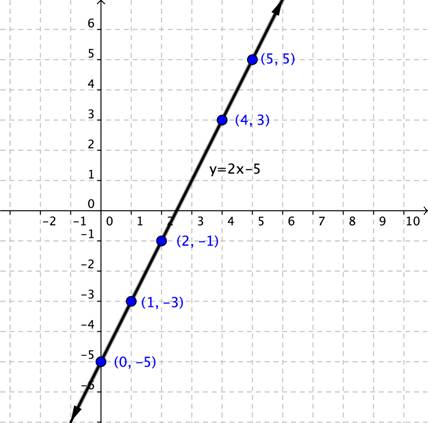 Solve for y, then graph a linear equation

The linear equations we have graphed so far are in the form [latex]y=mx+b[/latex] where m and b are real numbers. In this section we will graph linear equations that appear in different forms than we have seen.

Show Solution
First, solve [latex]y+3x=5[/latex] for y, then the equation will look familiar and you can create a table of ordered pairs.

Evaluate [latex]y=5–3x[/latex] for different values of x, and create a table of corresponding x and y values. 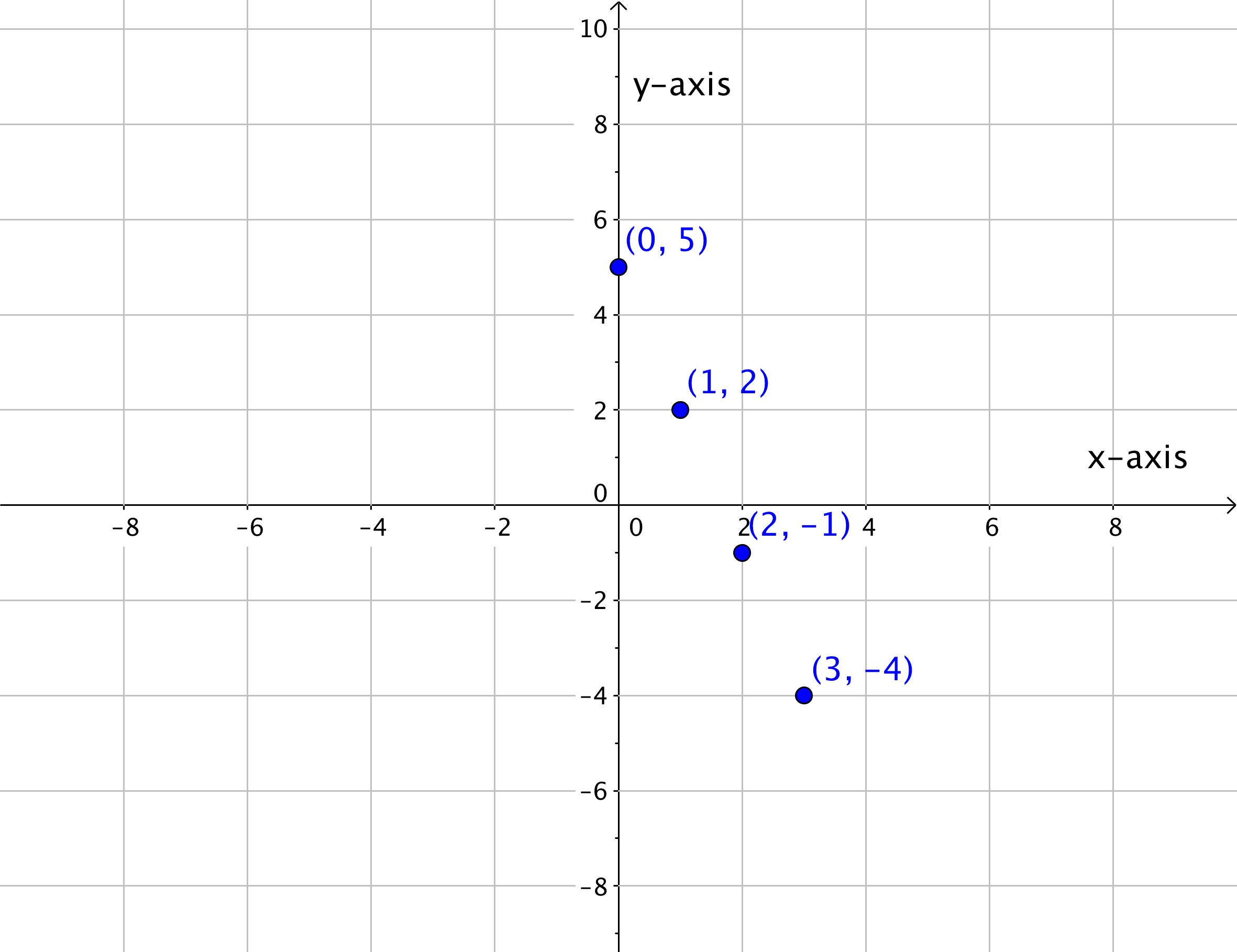 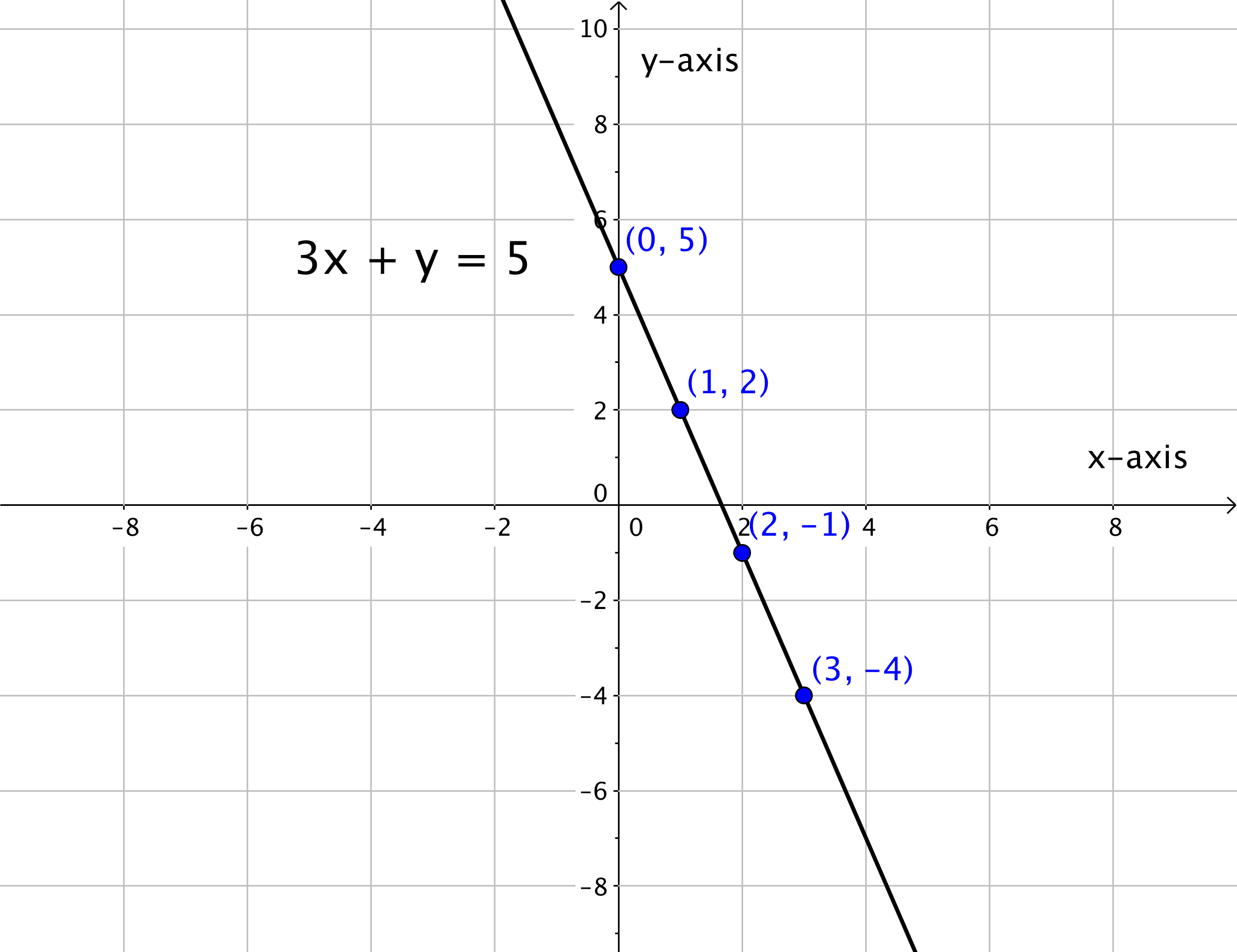 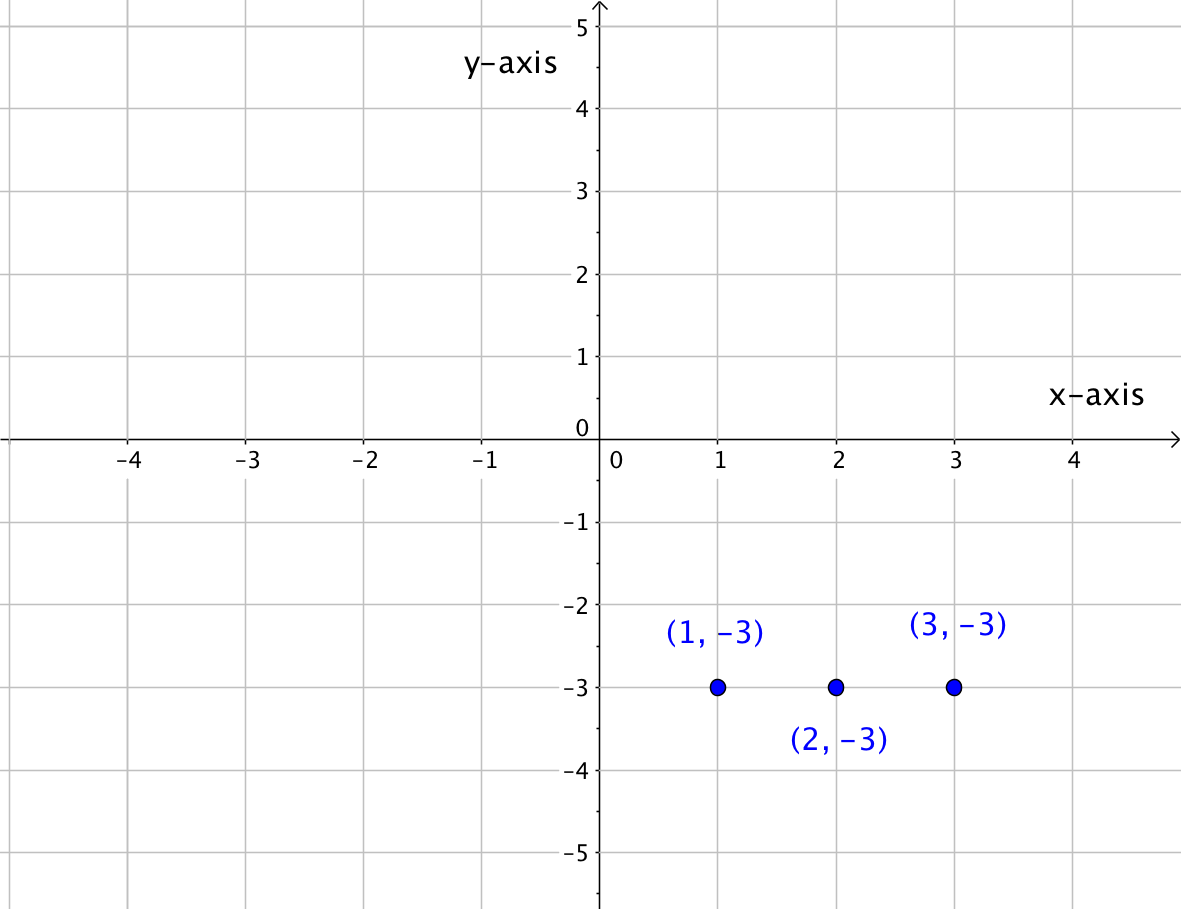 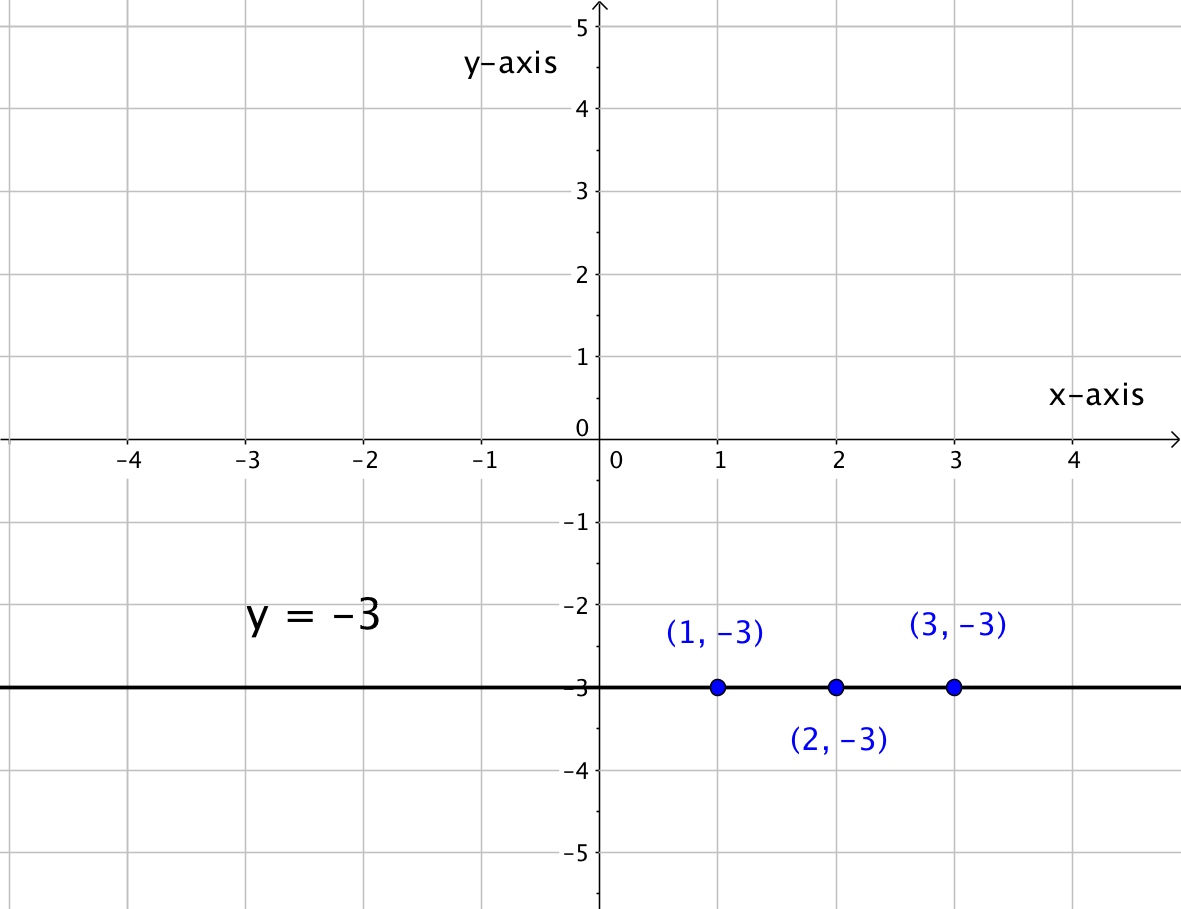 Notice that [latex]y=−3[/latex] graphs as a horizontal line. 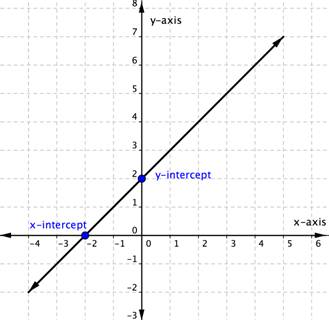 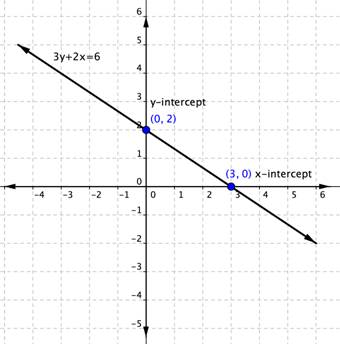 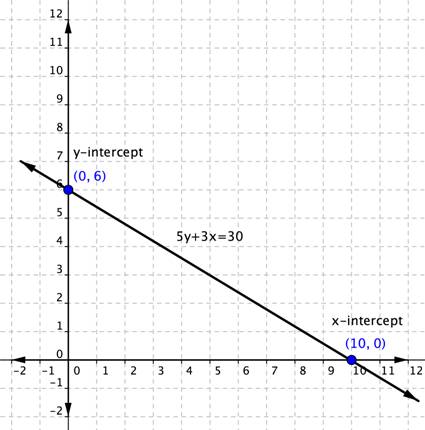 make graph for this example