Appendicular Muscles of the Pelvic Girdle and Lower Limbs

Muscles of the Thigh

What would happen if the pelvic girdle, which attaches the lower limbs to the torso, were capable of the same range of motion as the pectoral girdle? For one thing, walking would expend more energy if the heads of the femurs were not secured in the acetabula of the pelvis. The body’s center of gravity is in the area of the pelvis. If the center of gravity were not to remain fixed, standing up would be difficult as well. Therefore, what the leg muscles lack in range of motion and versatility, they make up for in size and power, facilitating the body’s stabilization, posture, and movement.

The tensor fascia lata is a thick, squarish muscle in the superior aspect of the lateral thigh. It acts as a synergist of the gluteus medius and iliopsoas in flexing and abducting the thigh. It also helps stabilize the lateral aspect of the knee by pulling on the iliotibial tract (band), making it taut. Deep to the gluteus maximus, the piriformis, obturator internus, obturator externus, superior gemellus, inferior gemellus, and quadratus femoris laterally rotate the femur at the hip.

Thigh Muscles That Move the Femur, Tibia, and Fibula

Deep fascia in the thigh separates it into medial, anterior, and posterior compartments (see Figure 1 and Table 2). The muscles in the medial compartment of the thigh are responsible for adducting the femur at the hip. Along with the adductor longus, adductor brevis, adductor magnus, and pectineus, the strap-like gracilis adducts the thigh in addition to flexing the leg at the knee.

The muscles of the anterior compartment of the thigh flex the thigh and extend the leg. This compartment contains the quadriceps femoris group, which actually comprises four muscles that extend and stabilize the knee. The rectus femoris is on the anterior aspect of the thigh, the vastus lateralis is on the lateral aspect of the thigh, the vastus medialis is on the medial aspect of the thigh, and the vastus intermedius is between the vastus lateralis and vastus medialis and deep to the rectus femoris. The tendon common to all four is the quadriceps tendon (patellar tendon), which inserts into the patella and continues below it as the patellar ligament. The patellar ligament attaches to the tibial tuberosity. In addition to the quadriceps femoris, the sartorius is a band-like muscle that extends from the anterior superior iliac spine to the medial side of the proximal tibia. This versatile muscle flexes the leg at the knee and flexes, abducts, and laterally rotates the leg at the hip. This muscle allows us to sit cross-legged.

The posterior compartment of the thigh includes muscles that flex the leg and extend the thigh. The three long muscles on the back of the knee are the hamstring group, which flexes the knee. These are the biceps femoris,semitendinosus, and semimembranosus. The tendons of these muscles form the popliteal fossa, the diamond-shaped space at the back of the knee.

Muscles That Move the Feet and Toes

Similar to the thigh muscles, the muscles of the leg are divided by deep fascia into compartments, although the leg has three: anterior, lateral, and posterior (Figure 2 and Table 3). 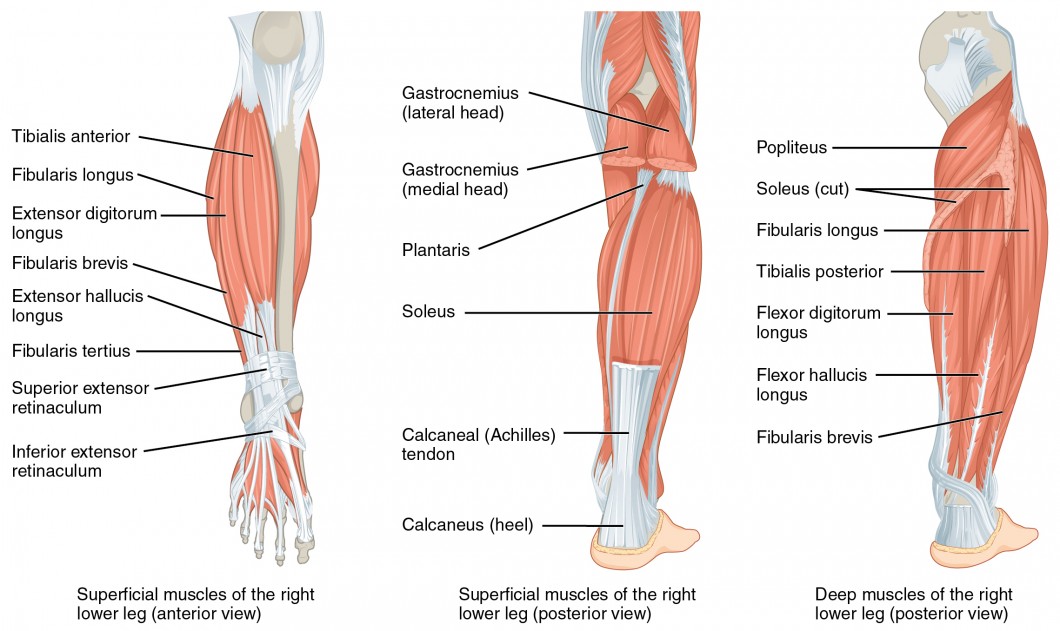 The muscles in the anterior compartment of the leg: the tibialis anterior, a long and thick muscle on the lateral surface of the tibia, the extensor hallucis longus, deep under it, and the extensor digitorum longus, lateral to it, all contribute to raising the front of the foot when they contract. The fibularis tertius, a small muscle that originates on the anterior surface of the fibula, is associated with the extensor digitorum longus and sometimes fused to it, but is not present in all people. Thick bands of connective tissue called the superior extensor retinaculum (transverse ligament of the ankle) and the inferior extensor retinaculum, hold the tendons of these muscles in place during dorsiflexion.

The lateral compartment of the leg includes two muscles: the fibularis longus (peroneus longus) and the fibularis brevis (peroneus brevis). The superficial muscles in the posterior compartment of the leg all insert onto the calcaneal tendon (Achilles tendon), a strong tendon that inserts into the calcaneal bone of the ankle. The muscles in this compartment are large and strong and keep humans upright. The most superficial and visible muscle of the calf is the gastrocnemius. Deep to the gastrocnemius is the wide, flat soleus. The plantaris runs obliquely between the two; some people may have two of these muscles, whereas no plantaris is observed in about seven percent of other cadaver dissections. The plantaris tendon is a desirable substitute for the fascia lata in hernia repair, tendon transplants, and repair of ligaments. There are four deep muscles in the posterior compartment of the leg as well: the popliteus, flexor digitorum longus, flexor hallucis longus, and tibialis posterior.

The foot also has intrinsic muscles, which originate and insert within it (similar to the intrinsic muscles of the hand). These muscles primarily provide support for the foot and its arch, and contribute to movements of the toes (Figure 3 and Table 4). The principal support for the longitudinal arch of the foot is a deep fascia called plantar aponeurosis, which runs from the calcaneus bone to the toes (inflammation of this tissue is the cause of “plantar fasciitis,” which can affect runners. The intrinsic muscles of the foot consist of two groups. The dorsal group includes only one muscle, the extensor digitorum brevis. The second group is the plantar group, which consists of four layers, starting with the most superficial. 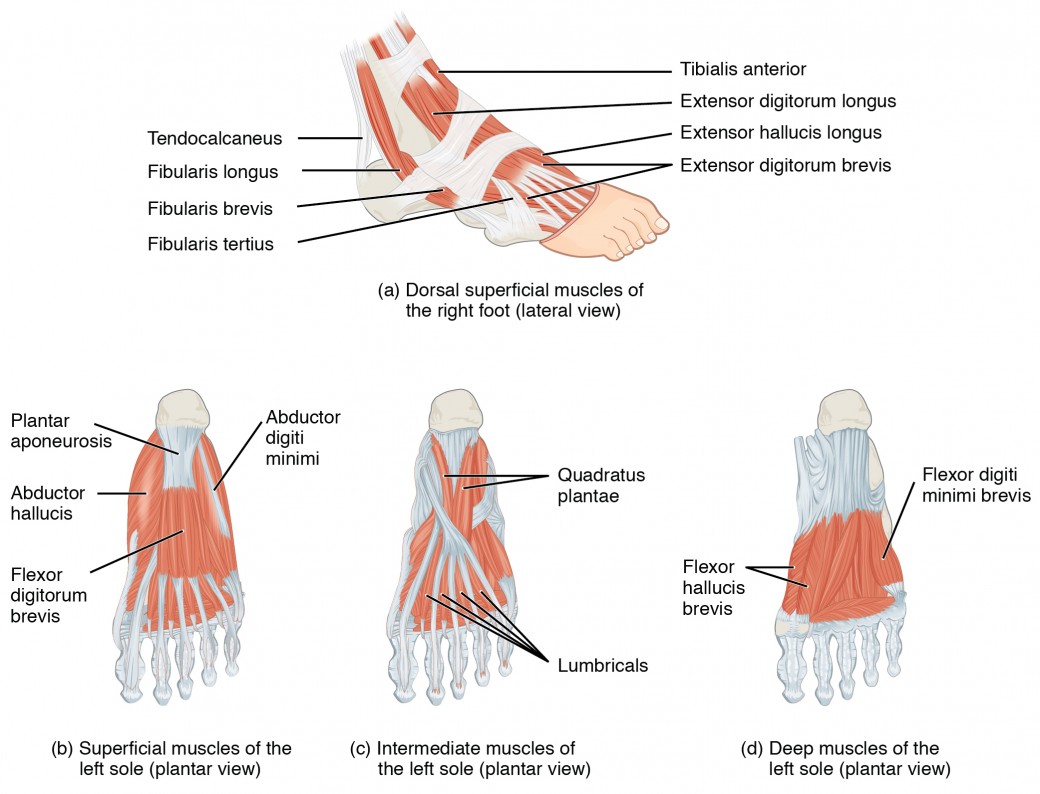 Figure 3. Intrinsic Muscles of the Foot. The muscles along the dorsal side of the foot (a) generally extend the toes while the muscles of the plantar side of the foot (b, c, d) generally flex the toes. The plantar muscles exist in three layers, providing the foot the strength to counterbalance the weight of the body. In this diagram, these three layers are shown from a plantar view beginning with the bottom-most layer just under the plantar skin of the foot (b) and ending with the top-most layer (d) located just inferior to the foot and toe bones.

Take the quiz below to check your understanding of the Appendicular Muscles of the Pelvic Girdle and Lower Limbs: