Muscles of the Pectoral Girdle and Upper Limbs

Muscles That Position the Pectoral Girdle

Muscles that position the pectoral girdle are located either on the anterior thorax or on the posterior thorax (Figure 1 and Table 1).

Figure 1. Muscles That Position the Pectoral Girdle. The muscles that stabilize the pectoral girdle make it a steady base on which other muscles can move the arm. Note that the pectoralis major and deltoid, which move the humerus, are cut here to show the deeper positioning muscles.

Muscles That Move the Humerus

Similar to the muscles that position the pectoral girdle, muscles that cross the shoulder joint and move the humerus bone of the arm include both axial and scapular muscles (Figure 2, Figure 3, and Table 2).

The rest of the shoulder muscles originate on the scapula. The anatomical and ligamental structure of the shoulder joint and the arrangements of the muscles covering it, allows the arm to carry out different types of movements. The deltoid, the thick muscle that creates the rounded lines of the shoulder is the major abductor of the arm, but it also facilitates flexing and medial rotation, as well as extension and lateral rotation. The subscapularis originates on the anterior scapula and medially rotates the arm. Named for their locations, the supraspinatus (superior to the spine of the scapula) and the infraspinatus (inferior to the spine of the scapula) abduct the arm, and laterally rotate the arm, respectively. The thick and flat teres major is inferior to the teres minor and extends the arm, and assists in adduction and medial rotation of it. The long teres minor laterally rotates and extends the arm. Finally, the coracobrachialis flexes and adducts the arm.

The tendons of the deep subscapularis, supraspinatus, infraspinatus, and teres minor connect the scapula to the humerus, forming the rotator cuff (musculotendinous cuff), the circle of tendons around the shoulder joint. When baseball pitchers undergo shoulder surgery it is usually on the rotator cuff, which becomes pinched and inflamed, and may tear away from the bone due to the repetitive motion of bring the arm overhead to throw a fast pitch.

Muscles That Move the Forearm 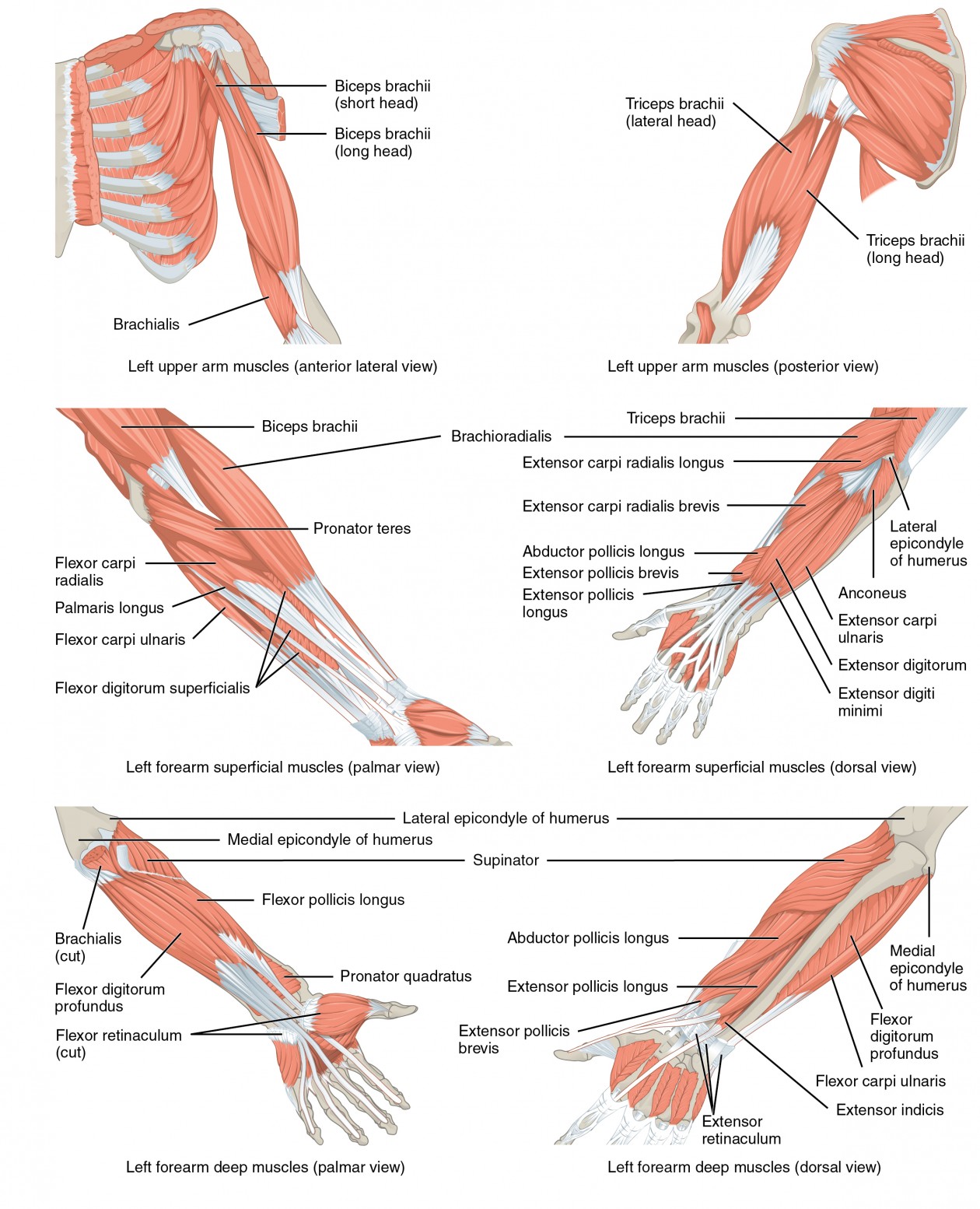 Muscles That Move the Wrist, Hand, and Fingers

Muscles of the Arm That Move the Wrists, Hands, and Fingers

Intrinsic Muscles of the Hand

Figure 5. Intrinsic Muscles of the Hand. The intrinsic muscles of the hand both originate and insert within the hand. These muscles provide the fine motor control of the fingers by flexing, extending, abducting, and adducting the more distal finger and thumb segments.

Take the quiz below to check your understanding of the Muscles of the Pectoral Girdle and Upper Limbs: