Bones of the Upper Limb

The upper limb is divided into three regions. These consist of the arm, located between the shoulder and elbow joints; the forearm, which is between the elbow and wrist joints; and the hand, which is located distal to the wrist. There are 30 bones in each upper limb. The humerus is the single bone of the upper arm, and the ulna (medially) and the radius (laterally) are the paired bones of the forearm. The base of the hand contains eight bones, each called a carpal bone, and the palm of the hand is formed by five bones, each called a metacarpal bone. The fingers and thumb contain a total of 14 bones, each of which is a phalanx bone of the hand. 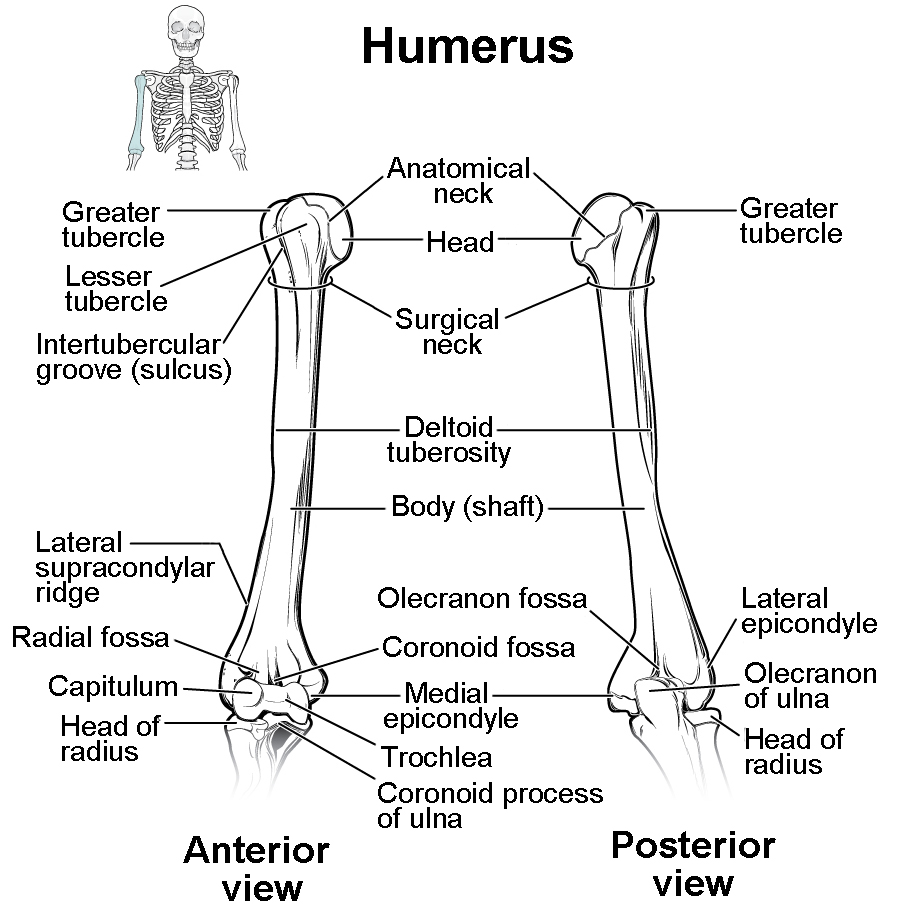 Figure 1. Humerus and Elbow Joint. The humerus is the single bone of the upper arm region. It articulates with the radius and ulna bones of the forearm to form the elbow joint.

The humerus is the single bone of the upper arm region (Figure 1). At its proximal end is the head of the humerus. This is the large, round, smooth region that faces medially. The head articulates with the glenoid cavity of the scapula to form the glenohumeral (shoulder) joint. The margin of the smooth area of the head is the anatomical neck of the humerus. Located on the lateral side of the proximal humerus is an expanded bony area called the greater tubercle. The smaller lesser tubercle of the humerus is found on the anterior aspect of the humerus. Both the greater and lesser tubercles serve as attachment sites for muscles that act across the shoulder joint. Passing between the greater and lesser tubercles is the narrow intertubercular groove (sulcus), which is also known as the bicipital groove because it provides passage for a tendon of the biceps brachii muscle. The surgical neck is located at the base of the expanded, proximal end of the humerus, where it joins the narrow shaft of the humerus. The surgical neck is a common site of arm fractures. The deltoid tuberosity is a roughened, V-shaped region located on the lateral side in the middle of the humerus shaft. As its name indicates, it is the site of attachment for the deltoid muscle.

The distal end of the humerus has two articulation areas, which join the ulna and radius bones of the forearm to form the elbow joint. The more medial of these areas is the trochlea, a spindle- or pulley-shaped region (trochlea = “pulley”), which articulates with the ulna bone. Immediately lateral to the trochlea is the capitulum (“small head”), a knob-like structure located on the anterior surface of the distal humerus. The capitulum articulates with the radius bone of the forearm. Just above these bony areas are two small depressions. These spaces accommodate the forearm bones when the elbow is fully bent (flexed). Superior to the trochlea is the coronoid fossa, which receives the coronoid process of the ulna, and above the capitulum is the radial fossa, which receives the head of the radius when the elbow is flexed. Similarly, the posterior humerus has the olecranon fossa, a larger depression that receives the olecranon process of the ulna when the forearm is fully extended. 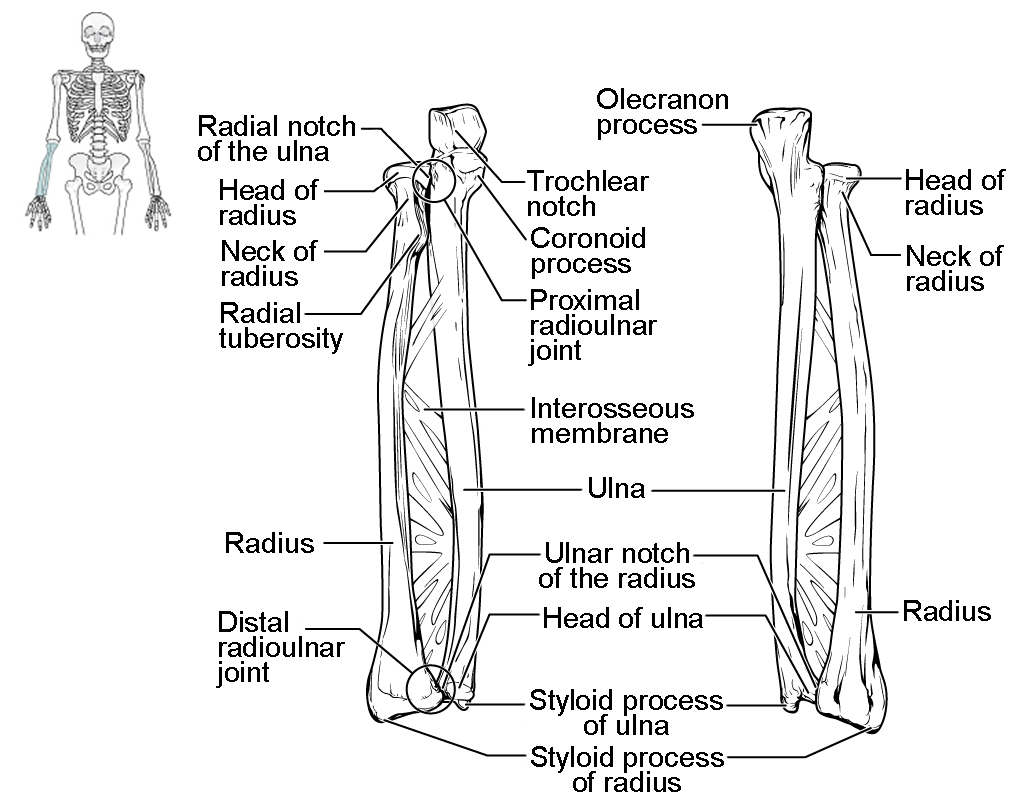 Figure 2. Ulna and Radius. The ulna is located on the medial side of the forearm, and the radius is on the lateral side. These bones are attached to each other by an interosseous membrane.

The ulna is the medial bone of the forearm. It runs parallel to the radius, which is the lateral bone of the forearm (Figure 2). The proximal end of the ulna resembles a crescent wrench with its large, C-shaped trochlear notch. This region articulates with the trochlea of the humerus as part of the elbow joint. The inferior margin of the trochlear notch is formed by a prominent lip of bone called the coronoid process of the ulna. Just below this on the anterior ulna is a roughened area called the ulnar tuberosity. To the lateral side and slightly inferior to the trochlear notch is a small, smooth area called the radial notch of the ulna. This area is the site of articulation between the proximal radius and the ulna, forming the proximal radioulnar joint. The posterior and superior portions of the proximal ulna make up the olecranon process, which forms the bony tip of the elbow.

In the anatomical position, with the elbow fully extended and the palms facing forward, the arm and forearm do not form a straight line. Instead, the forearm deviates laterally by 5–15 degrees from the line of the arm. This deviation is called the carrying angle. It allows the forearm and hand to swing freely or to carry an object without hitting the hip. The carrying angle is larger in females to accommodate their wider pelvis.

The radius runs parallel to the ulna, on the lateral (thumb) side of the forearm (see Figure 2). The head of the radius is a disc-shaped structure that forms the proximal end. The small depression on the surface of the head articulates with the capitulum of the humerus as part of the elbow joint, whereas the smooth, outer margin of the head articulates with the radial notch of the ulna at the proximal radioulnar joint.

The neck of the radius is the narrowed region immediately below the expanded head. Inferior to this point on the medial side is the radial tuberosity, an oval-shaped, bony protuberance that serves as a muscle attachment point.

The wrist and base of the hand are formed by a series of eight small carpal bones (see Figure 3). The carpal bones are arranged in two rows, forming a proximal row of four carpal bones and a distal row of four carpal bones. The bones in the proximal row, running from the lateral (thumb) side to the medial side, are the scaphoid (“boat-shaped”), lunate (“moon-shaped”), triquetrum (“three-cornered”), and pisiform (“pea-shaped”) bones. The small, rounded pisiform bone articulates with the anterior surface of the triquetrum bone. The pisiform thus projects anteriorly, where it forms the bony bump that can be felt at the medial base of your hand. The distal bones (lateral to medial) are the trapezium (“table”), trapezoid (“resembles a table”), capitate (“head-shaped”), and hamate (“hooked bone”) bones. The hamate bone is characterized by a prominent bony extension on its anterior side called the hook of the hamate bone. 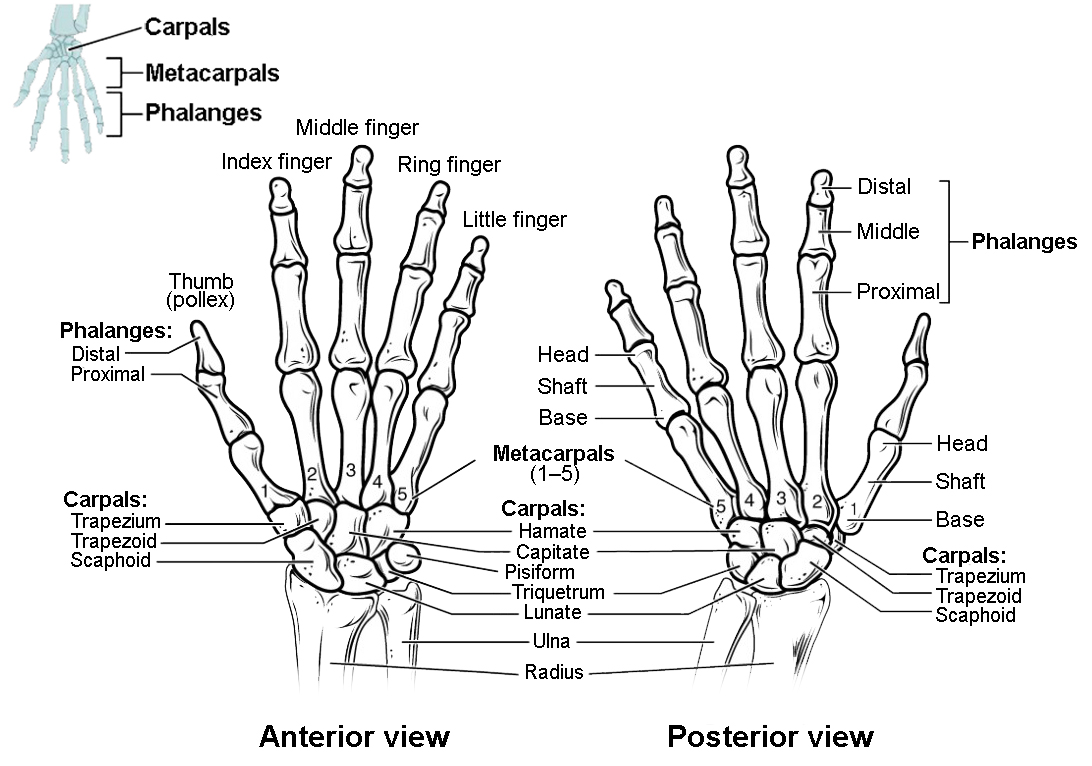 A helpful mnemonic for remembering the arrangement of the carpal bones is “So Long To Pinky, Here Comes The Thumb.” This mnemonic starts on the lateral side and names the proximal bones from lateral to medial (scaphoid, lunate, triquetrum, pisiform), then makes a U-turn to name the distal bones from medial to lateral (hamate, capitate, trapezoid, trapezium). Thus, it starts and finishes on the lateral side. 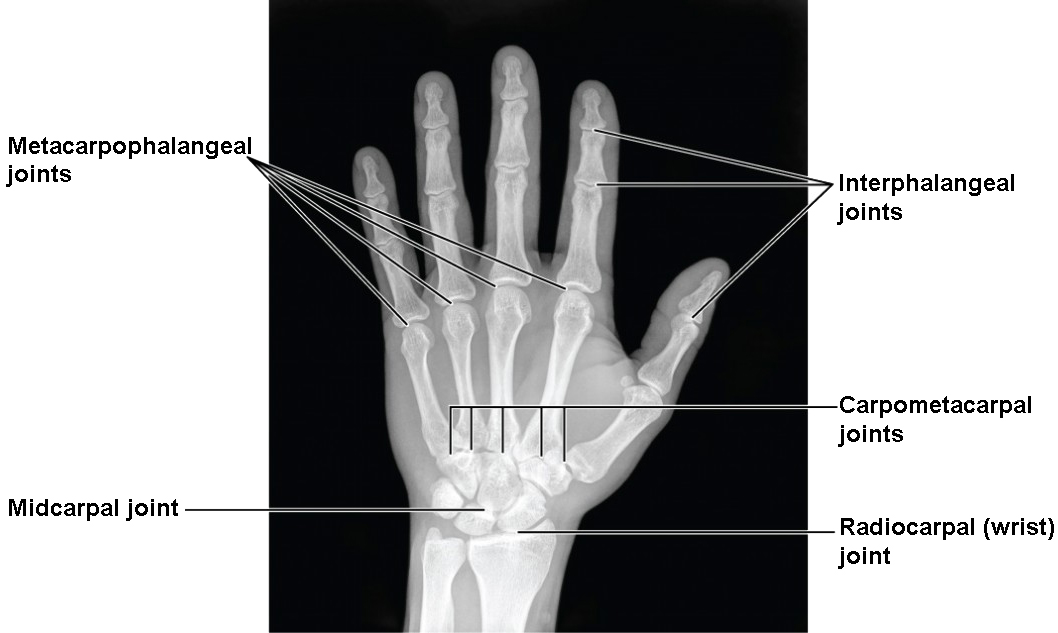 Figure 4. Bones of the Hand. This radiograph shows the position of the bones within the hand. Note the carpal bones that form the base of the hand. (credit: modification of work by Trace Meek)

The carpal bones form the base of the hand. This can be seen in the radiograph (X-ray image) of the hand that shows the relationships of the hand bones to the skin creases of the hand (see Figure 4). Within the carpal bones, the four proximal bones are united to each other by ligaments to form a unit. Only three of these bones, the scaphoid, lunate, and triquetrum, contribute to the radiocarpal joint. The scaphoid and lunate bones articulate directly with the distal end of the radius, whereas the triquetrum bone articulates with a fibrocartilaginous pad that spans the radius and styloid process of the ulna. The distal end of the ulna thus does not directly articulate with any of the carpal bones. 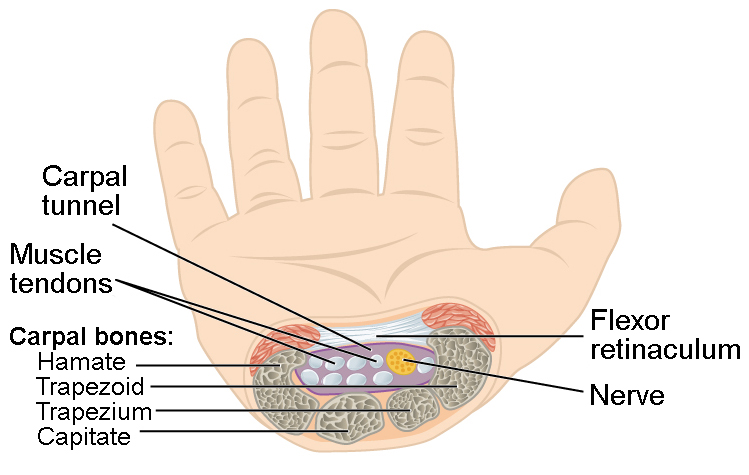 The tendons of nine muscles of the anterior forearm and an important nerve pass through this narrow tunnel to enter the hand. Overuse of the muscle tendons or wrist injury can produce inflammation and swelling within this space. This produces compression of the nerve, resulting in carpal tunnel syndrome, which is characterized by pain or numbness, and muscle weakness in those areas of the hand supplied by this nerve.

Figure 6. Hand During Gripping. During tight gripping—compare (b) to (a)—the fourth and, particularly, the fifth metatarsal bones are pulled anteriorly. This increases the contact between the object and the medial side of the hand, thus improving the firmness of the grip.

The fingers and thumb contain 14 bones, each of which is called a phalanx bone (plural = phalanges), named after the ancient Greek phalanx (a rectangular block of soldiers). The thumb (pollex) is digit number 1 and has two phalanges, a proximal phalanx, and a distal phalanx bone (see Figure 3). Digits 2 (index finger) through 5 (little finger) have three phalanges each, called the proximal, middle, and distal phalanx bones. An interphalangeal joint is one of the articulations between adjacent phalanges of the digits (see Figure 4).

Visit this site to explore the bones and joints of the hand. What are the three arches of the hand, and what is the importance of these during the gripping of an object?

Disorders of the Appendicular System: Fractures of the Upper Limb Bones

Due to our constant use of the hands and the rest of our upper limbs, an injury to any of these areas will cause a significant loss of functional ability. Many fractures result from a hard fall onto an outstretched hand. The resulting transmission of force up the limb may result in a fracture of the humerus, radius, or scaphoid bones. These injuries are especially common in elderly people whose bones are weakened due to osteoporosis. 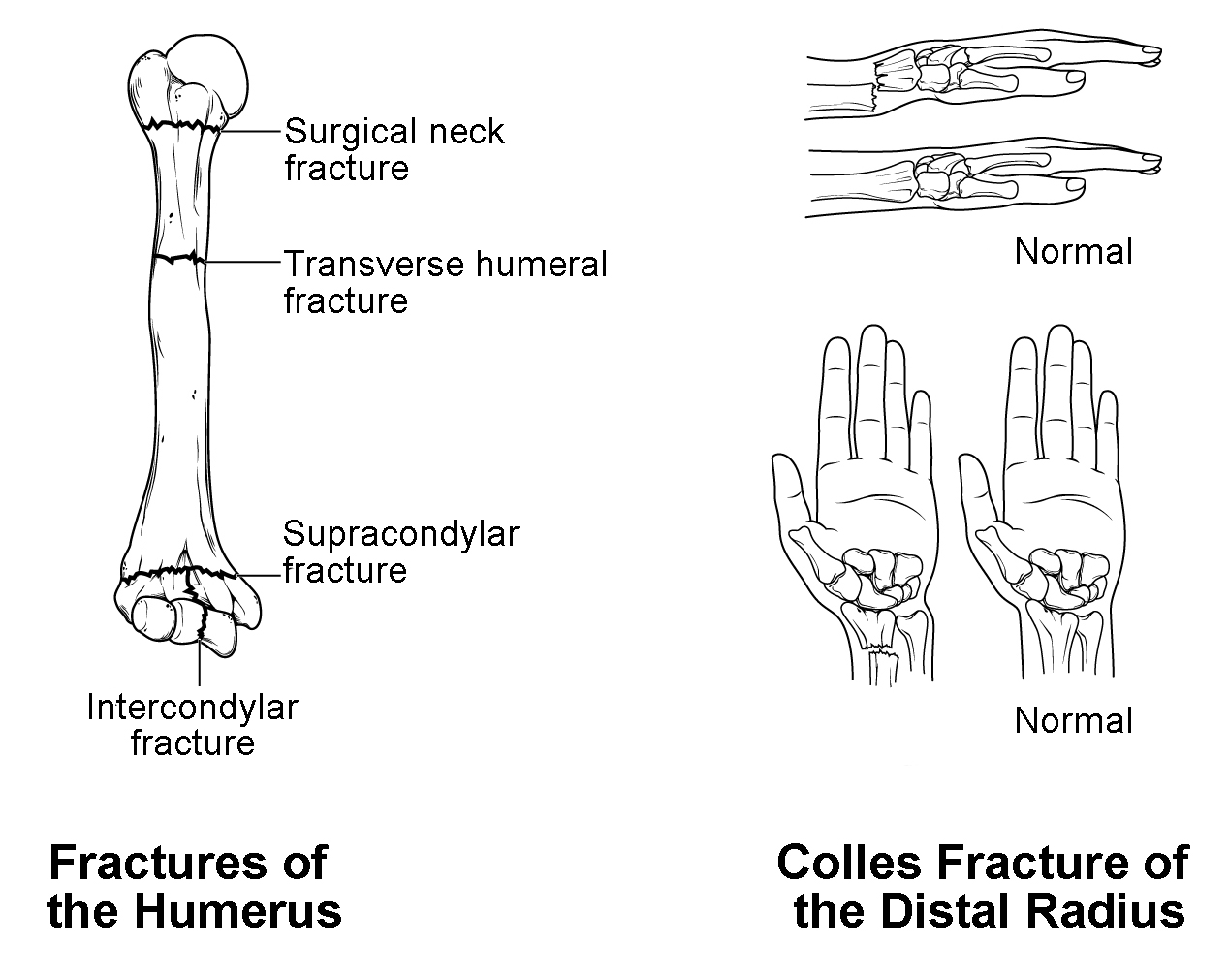 In children, a fall onto the tip of the elbow frequently results in a distal humerus fracture. In these, the olecranon of the ulna is driven upward, resulting in a fracture across the distal humerus, above both epicondyles (supracondylar fracture), or a fracture between the epicondyles, thus separating one or both of the epicondyles from the body of the humerus (intercondylar fracture). With these injuries, the immediate concern is possible compression of the artery to the forearm due to swelling of the surrounding tissues. If compression occurs, the resulting ischemia (lack of oxygen) due to reduced blood flow can quickly produce irreparable damage to the forearm muscles. In addition, four major nerves for shoulder and upper limb muscles are closely associated with different regions of the humerus, and thus, humeral fractures may also damage these nerves.

Another frequent injury following a fall onto an outstretched hand is a Colles fracture (“col-lees”) of the distal radius (see Figure 7). This involves a complete transverse fracture across the distal radius that drives the separated distal fragment of the radius posteriorly and superiorly. This injury results in a characteristic “dinner fork” bend of the forearm just above the wrist due to the posterior displacement of the hand. This is the most frequent forearm fracture and is a common injury in persons over the age of 50, particularly in older women with osteoporosis. It also commonly occurs following a high-speed fall onto the hand during activities such as snowboarding or skating.

The most commonly fractured carpal bone is the scaphoid, often resulting from a fall onto the hand. Deep pain at the lateral wrist may yield an initial diagnosis of a wrist sprain, but a radiograph taken several weeks after the injury, after tissue swelling has subsided, will reveal the fracture. Due to the poor blood supply to the scaphoid bone, healing will be slow and there is the danger of bone necrosis and subsequent degenerative joint disease of the wrist.

Watch this video to learn about a Colles fracture, a break of the distal radius, usually caused by falling onto an outstretched hand. When would surgery be required and how would the fracture be repaired in this case?

Take the quiz below to check your understanding of Bones of the Upper Limb: