Lactation is the process by which milk is synthesized and secreted from the mammary glands of the postpartum female breast in response to an infant sucking at the nipple. Breast milk provides ideal nutrition and passive immunity for the infant, encourages mild uterine contractions to return the uterus to its pre-pregnancy size (i.e., involution), and induces a substantial metabolic increase in the mother, consuming the fat reserves stored during pregnancy.

Structure of the Lactating Breast

Mammary glands are modified sweat glands. The non-pregnant and non-lactating female breast is composed primarily of adipose and collagenous tissue, with mammary glands making up a very minor proportion of breast volume. The mammary gland is composed of milk-transporting lactiferous ducts, which expand and branch extensively during pregnancy in response to estrogen, growth hormone, cortisol, and prolactin. Moreover, in response to progesterone, clusters of breast alveoli bud from the ducts and expand outward toward the chest wall. Breast alveoli are balloon-like structures lined with milk-secreting cuboidal cells, or lactocytes, that are surrounded by a net of contractile myoepithelial cells. Milk is secreted from the lactocytes, fills the alveoli, and is squeezed into the ducts. Clusters of alveoli that drain to a common duct are called lobules; the lactating female has 12–20 lobules organized radially around the nipple. Milk drains from lactiferous ducts into lactiferous sinuses that meet at 4 to 18 perforations in the nipple, called nipple pores. The small bumps of the areola (the darkened skin around the nipple) are called Montgomery glands. They secrete oil to cleanse the nipple opening and prevent chapping and cracking of the nipple during breastfeeding.

The Process of Lactation

The pituitary hormone prolactin is instrumental in the establishment and maintenance of breast milk supply. It also is important for the mobilization of maternal micronutrients for breast milk.

Near the fifth week of pregnancy, the level of circulating prolactin begins to increase, eventually rising to approximately 10–20 times the pre-pregnancy concentration. We noted earlier that, during pregnancy, prolactin and other hormones prepare the breasts anatomically for the secretion of milk. The level of prolactin plateaus in late pregnancy, at a level high enough to initiate milk production. However, estrogen, progesterone, and other placental hormones inhibit prolactin-mediated milk synthesis during pregnancy. It is not until the placenta is expelled that this inhibition is lifted and milk production commences.

After childbirth, the baseline prolactin level drops sharply, but it is restored for a 1-hour spike during each feeding to stimulate the production of milk for the next feeding. With each prolactin spike, estrogen and progesterone also increase slightly.

When the infant suckles, sensory nerve fibers in the areola trigger a neuroendocrine reflex that results in milk secretion from lactocytes into the alveoli. The posterior pituitary releases oxytocin, which stimulates myoepithelial cells to squeeze milk from the alveoli so it can drain into the lactiferous ducts, collect in the lactiferous sinuses, and discharge through the nipple pores. It takes less than 1 minute from the time when an infant begins suckling (the latent period) until milk is secreted (the let-down). The image below summarizes the positive feedback loop of the let-down reflex. 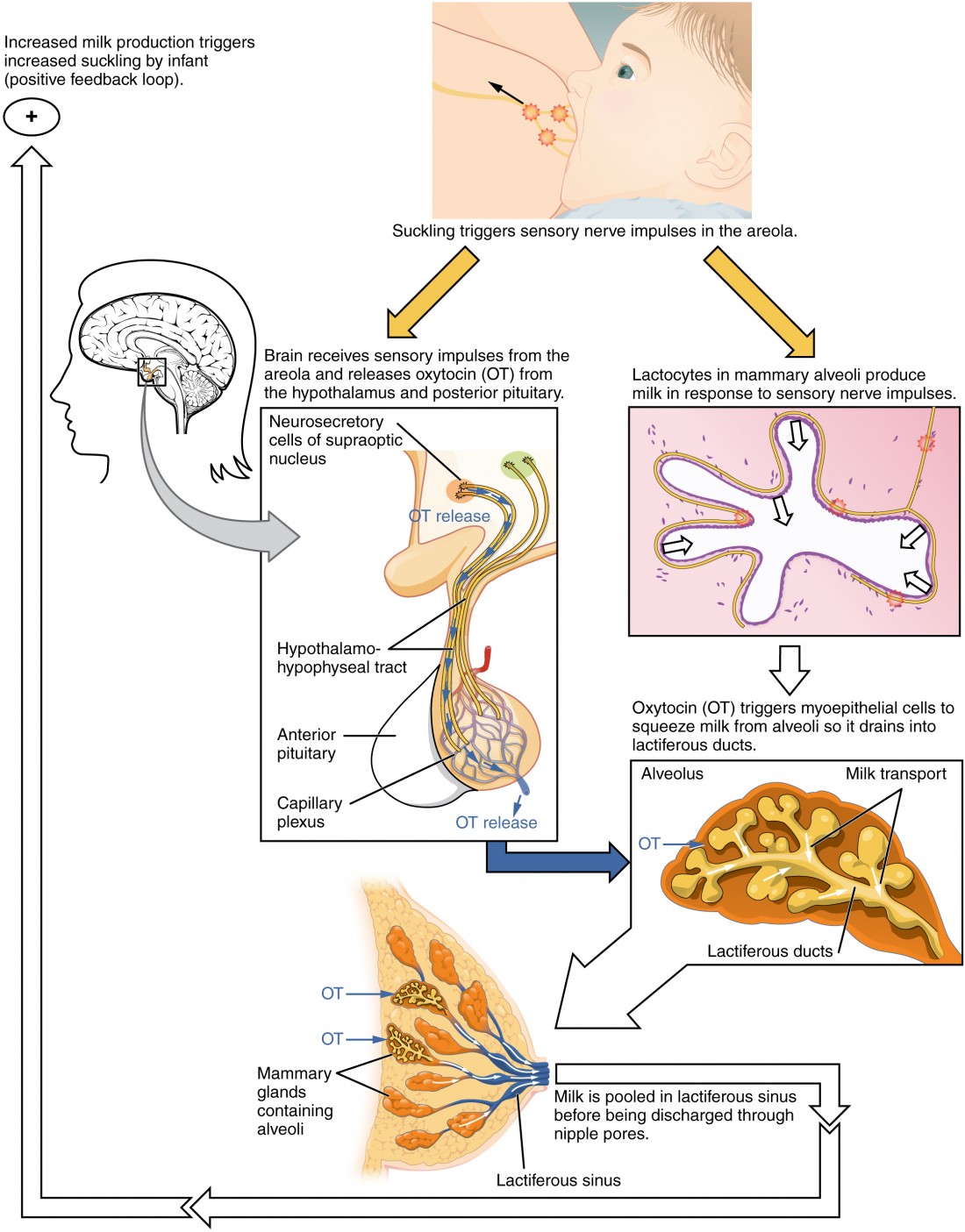 Figure 1. Click for a larger image. A positive feedback loop ensures continued milk production as long as the infant continues to breastfeed.

The prolactin-mediated synthesis of milk changes with time. Frequent milk removal by breastfeeding (or pumping) will maintain high circulating prolactin levels for several months. However, even with continued breastfeeding, baseline prolactin will decrease over time to its pre-pregnancy level. In addition to prolactin and oxytocin, growth hormone, cortisol, parathyroid hormone, and insulin contribute to lactation, in part by facilitating the transport of maternal amino acids, fatty acids, glucose, and calcium to breast milk.

Changes in the Composition of Breast Milk

In the final weeks of pregnancy, the alveoli swell with colostrum, a thick, yellowish substance that is high in protein but contains less fat and glucose than mature breast milk. Before childbirth, some women experience leakage of colostrum from the nipples. In contrast, mature breast milk does not leak during pregnancy and is not secreted until several days after childbirth.

Colostrum is secreted during the first 48–72 hours postpartum. Only a small volume of colostrum is produced—approximately 3 ounces in a 24-hour period—but it is sufficient for the newborn in the first few days of life. Colostrum is rich with immunoglobulins, which confer gastrointestinal, and also likely systemic, immunity as the newborn adjusts to a nonsterile environment.

After about the third postpartum day, the mother secretes transitional milk that represents an intermediate between mature milk and colostrum. This is followed by mature milk from approximately postpartum day 10. As you can see in the accompanying table, cow’s milk is not a substitute for breast milk. It contains less lactose, less fat, and more protein and minerals. Moreover, the proteins in cow’s milk are difficult for an infant’s immature digestive system to metabolize and absorb.

The first few weeks of breastfeeding may involve leakage, soreness, and periods of milk engorgement as the relationship between milk supply and infant demand becomes established. Once this period is complete, the mother will produce approximately 1.5 liters of milk per day for a single infant, and more if she has twins or triplets. As the infant goes through growth spurts, the milk supply constantly adjusts to accommodate changes in demand. A woman can continue to lactate for years, but once breastfeeding is stopped for approximately 1 week, any remaining milk will be reabsorbed; in most cases, no more will be produced, even if suckling or pumping is resumed.

During the first days of a newborn’s life, it is important for meconium to be cleared from the intestines and for bilirubin to be kept low in the circulation. Recall that bilirubin, a product of erythrocyte breakdown, is processed by the liver and secreted in bile. It enters the gastrointestinal tract and exits the body in the stool. Breast milk has laxative properties that help expel meconium from the intestines and clear bilirubin through the excretion of bile. A high concentration of bilirubin in the blood causes jaundice. Some degree of jaundice is normal in newborns, but a high level of bilirubin—which is neurotoxic—can cause brain damage. Newborns, who do not yet have a fully functional blood–brain barrier, are highly vulnerable to the bilirubin circulating in the blood. Indeed, hyperbilirubinemia, a high level of circulating bilirubin, is the most common condition requiring medical attention in newborns. Newborns with hyperbilirubinemia are treated with phototherapy because UV light helps to break down the bilirubin quickly.

The lactating mother supplies all the hydration and nutrients that a growing infant needs for the first 4–6 months of life. During pregnancy, the body prepares for lactation by stimulating the growth and development of branching lactiferous ducts and alveoli lined with milk-secreting lactocytes, and by creating colostrum. These functions are attributable to the actions of several hormones, including prolactin. Following childbirth, suckling triggers oxytocin release, which stimulates myoepithelial cells to squeeze milk from alveoli. Breast milk then drains toward the nipple pores to be consumed by the infant. Colostrum, the milk produced in the first postpartum days, provides immunoglobulins that increase the newborn’s immune defenses. Colostrum, transitional milk, and mature breast milk are ideally suited to each stage of the newborn’s development, and breastfeeding helps the newborn’s digestive system expel meconium and clear bilirubin. Mature milk changes from the beginning to the end of a feeding. Foremilk quenches the infant’s thirst, whereas hindmilk satisfies the infant’s appetite.

foremilk: watery, translucent breast milk that is secreted first during a feeding and is rich in lactose and protein; quenches the infant’s thirst

hindmilk: opaque, creamy breast milk delivered toward the end of a feeding; rich in fat; satisfies the infant’s appetite

lactation: process by which milk is synthesized and secreted from the mammary glands of the postpartum female breast in response to sucking at the nipple

let-down reflex: release of milk from the alveoli triggered by infant suckling

prolactin: pituitary hormone that establishes and maintains the supply of breast milk; also important for the mobilization of maternal micronutrients for breast milk