Although epidemiology was initially designed to control and prevent epidemics of communicable disease, the model was later expanded to address the prevention of communicable and noncommunicable disease. By late 20th century, additional methods were developed to apply the model for chronic disease as well (CDC, 2012). According to National Center for Health Statistics, chronic diseases are diseases that lasts for 3 months or more and require ongoing medical attention. Treatments such as vaccinations and medications can help manage the disease but they cannot be cured. Chronic diseases such as diabetes, cancer, and heart disease are leading cause of death and disability in United States (CDC, 2018). 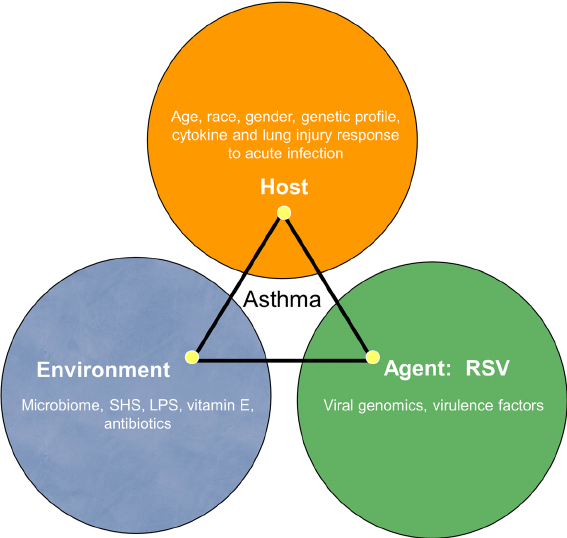 The Epidemiological Triad of Chronic disease studies the distribution and the causal factors of the disease, which are then applied to the study of controlling and preventing the chronic health problem (CDC, 2012).

Application of Epidemiology Triad to Asthma:

In the United States, asthma is one of the most prevalent respiratory illnesses in both young and old, but predominantly in children. Asthma is a chronic lung condition that causes inflammation and narrowing of airway passage. Due to the swelling and constriction, the lungs receive less air, making it difficult to breathe and causes coughing, wheezing, chest tightness, etc. The Global Initiative for Asthma (GINA) indicated that asthma is a major disease affecting over 300 million people worldwide, but you can see it largely in minorities and school-aged children growing up in poor urban environments (Paul, 2017).

As mentioned in the introduction, the host refers to the human capable of developing the disease. Some of the factors of hosts contributing to the prevalence of asthma are genetics, ethnicity and socioeconomic status, sex, and gender.

All three components of the epidemiological triad are linked in development of asthma.