Components of the Model

For modifying factors there are three different aspects to be looked at, demographics, perceived threat, and cues to action. Demographics includes things like age, gender, race, religion, socioeconomic status, education, personality, and much more varying person to person. Perceived threat is a combination of both the perceived susceptibility and severity, and looking more into the cause and outcome of having the health problem. Also, perceived threat is influenced by self-efficacy. Lastly, cues to action involves external motivators that urges someone to act in a certain way towards their concern. Cues to action can include things like education, media and peer pressure. 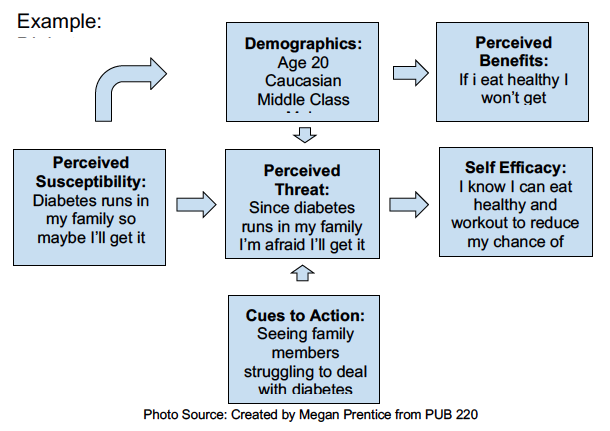 An example of the HBM is the practice of mammography check-ups among older woman. Perceived susceptibility includes that older women have higher chances of developing breast cancer. Perceived severity includes women recognizing that breast cancer is a deadly disease. Perceived benefits of getting screened involve improved cancer detection rates and therefore better survival rates and treatments if an individual is found to have breast cancer. Perceived barriers include the potential lack of access to a doctor’s office due to location or lack of insurance. Cues to action include reminders for the individual to get screened. For example, a cue for a woman is that breast cancer could run in her family. Self-efficacy involves the woman’s belief that she can effectively get screened (University of Pennsylvania, 2018).