Does Your Zip Code Define Your Health?

“In our community, black folks are sicker and don’t live as long as whites. This is 100 percent preventable and fixable.”
– Ellen Goldbaum

Social determinants of health typically strongly correlate with the health status of a given community, so much, that your zip code can be a very accurate predictor of your health (Bhatt, 2018). Health disparities are evident in many areas of Erie County for a variety of contributing factors. Within Erie County, there are zip codes with significantly lower socioeconomic status than the county as a whole. According to a report from 2015 based on statistics gathered from health records in Erie County and New York State, “African-Americans living in the 14204, 14206, 14211, 14212 or 14215 zip code, are almost three times as likely to die prematurely as a white person living in a different zip code, shown in figure 1 (Ewing, 2018).” According to the Erie County Community Health Assessment, disparities in the community, whether we look at race, ethnicity, education, or socioeconomic statuses are all evident within these zip codes. As expected, health outcomes are significantly poorer than those of the county as a whole.

Health & Groups at a Higher Risk

Poor health indicators are concentrated in neighborhoods that are most disadvantaged by society’s social, economic, and housing inequalities. Over 70% of the Erie County Department of Health clinic patients come from the zip codes listed above (Burstein & Polancarz, 2017). African Americans have a higher risk for chronic diseases, poverty, premature deaths, infant mortality, and much more. Infant mortality among Blacks is three times that of whites. “In Erie County, out of 10,000, 11.1 percent of infants will die, that statistic is higher than some developing countries” (Ewing, 2018). There are zip codes in Buffalo where about 15% of babies are low birth weight (LBW), low birth weight infants may have trouble fighting off infectious and organ problems (Cadzow, 2018). African American children are more often hospitalized for asthma, and African American adults are hospitalized for diabetes far more often than whites. One main reason is due to the lack of access and use of primary care services. National data show that African American women are less likely to get breast cancer than white women but are more likely to die from it (CDC, 2018). These unjust indications show you something is systematically wrong.

Infant Mortality: The death of children under the age of one year. The infant mortality rate is the number of infant deaths for every 1,000 live births (CDC, 2018).

Food Insecurity and Deserts In These Zip Codes

Food insecurity and food deserts are at an ultimate high in the zip codes previously listed. These areas have limited or no access to healthy food, which contributes to minorities having the highest obesity rates in this city. It has been statistically proven that black residents are six times as likely as white residents to live in areas without adequate access to a supermarket, shown in figure 2 (Ross, 2017). The overall, current food insecurity rate in Erie County is 12.7%. Children in Erie county are suffering from limited access to sufficient supply of safe and nutritious food, leaving them at a food insecurity rate of 18.6%. Low income households, predominantly in these zip codes are left with no choice besides cheaper foods, which usually contains high levels of fat, sugar, salt and low micronutrients. Some may wonder how are individuals overweight or obese if they are food insecure; this is called the hunger-obesity paradox. We see this happening in individuals who have limited access to grocery stores, purchase less expensive foods that are high in calories and fat but missing micronutrients, and individuals who have inconsistent access to food which can lead to overeating when food is available. 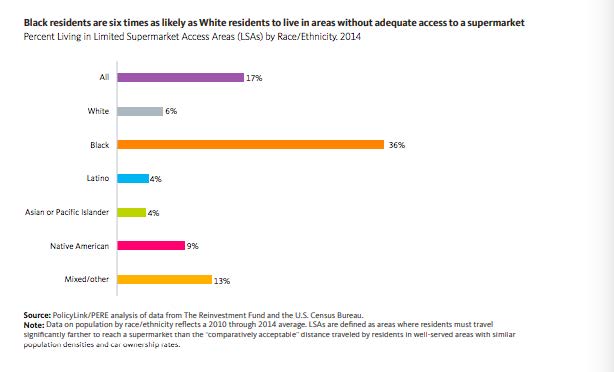 Black residents are six more times as likely as white residents to live in areas without adequate access to a supermarket (Ross, 2017).

Food Insecurity: When the availability of nutritionally adequate and safe foods or the ability to acquire food is limited or uncertain.

Food Desert: An urban area in which it is difficult to buy affordable or good-quality fresh food.

Hunger-Obesity Paradox: Not uncommon for food-insecure individuals to be overweight or obese.