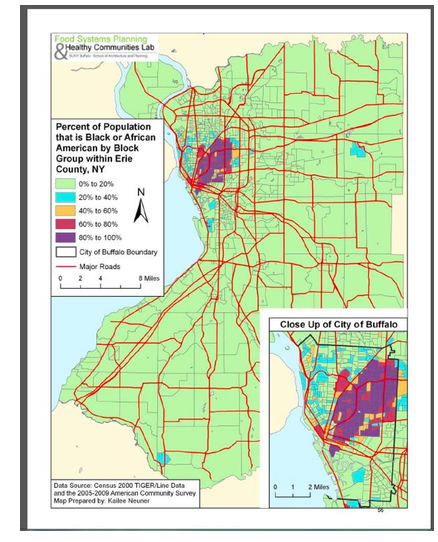 Health disparities refer to differences in the health status of different groups of people. Race, ethnicity, disability, immigrant status, income, and geography are factors that might influence if people receive adequate healthcare or not (Health Disparities, 2018). In a country in which health insurance is a driving force for healthcare, the uninsured often get forgotten or left behind. In Buffalo, New York, health disparities are extremely out of line with the remainder of the state. Buffalo, being the second largest city in the state, experiences disparities at a higher rate than most major cities in the United States.

In Buffalo, approximately thirty percent of the population lives at or below the poverty line, which is double the fifteen percent state average (Burstein & Polancarz, 2017). The city of Buffalo’s residents are fifty four percent of its population, which is more than double Erie county’s average. Most of the medical conditions experienced by residents in Buffalo are predominantly chronic conditions that, with proper medical attention, could have been altered prior to their conception. The rates of chronic diseases in the city of Buffalo far surpass the state average. The city of Buffalo also experiences higher rates of preterm births, and low birth weight babies, as well as higher rates of sexually transmitted diseases than the state average. Something is wrong systematically in Buffalo, New York that is failing its residents. These disparities are highlighted in Buffalo, but are present throughout the country. If the problems in this city can be solved, the solution can be widely used by public health professionals across the country. Buffalo needs to be an example for equality and it starts by breaking down each issue to its core.