Chapter 10: Application of the Theory of Reasoned Action/Theory of Planned Behavior and Integrative Behavioral Model 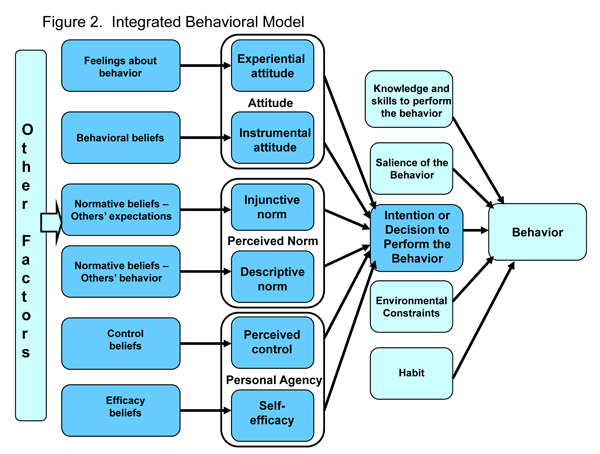 The Integrated Behavior Model (IBM) combines constructs represented in the Theory of Reasoned Action and the Theory of Planned Behavior. IBM also presents new or changed determinants that affect the intention to perform a behavior. These determinants include Experiential Attitude, Descriptive Norm, Personal Agency, and Self-efficacy. For Experiential Attitude, which is a construct found only in the IBM’s framework, there are two scale-types that their use is dependent on: the proper form of measure, direct or indirect. A direct measure refers to an affective evaluation of a behavior, overall. In this case, a Semantic differential scale is performed. This type of measure uses a bipolar scale to gauge an individual’s reaction to words and concepts by placing contrasting adjectives at each end (pleasant – unpleasant). An indirect measure for Experiential Attitude refers to the correlation between behavioral performance beliefs and specific positive or negative feelings (Glanz, 2008). An indirect measure uses a Seven-point Bipolar unlikely-likely scale with one end being referred to as unlikely and the other end being referred to as likely.

The next construct for the Integrated Behavior Model is Perceived Norm, which includes social pressure some individual feels to perform or not perform a certain behavior (Fishbein, 2007). A Direct measure for Descriptive Norm identifies an individual’s perspective on whether or not most people perform a particular behavior; whereas, an indirect measure focuses on the subject’s belief that they perform the behavior or not. Both of these measures use a seven-point bipolar scale with the focused adjectives being disagree and agree on opposing ends.

The final construct presented in IBM is Personal Agency. Personal Agency consists of Perceived Control, described previously in TPB, and Self-Efficacy. Self-Efficacy is explained in this model as the individual’s level of confidence in their ability to perform a particular behavior despite obstacles or challenges that stand in their way. The direct measure associated with Self-Efficacy looks to identify an individual’s overall ability to perform the behavior. The indirect measure looks at how an individual perceives their ability to overcome facilitative or constraining conditions when attempting to perform a behavior. Both of these measures use a Certain I could not – Certain I could scale that can be scored using -3 to 3 (7-point) bipolar scale or a 1 to 7 Unipolar scale.

Before measurements of the 3 main constructs (Attitude, Perceived Norm, Personal Agency) can be developed for a specific behavior, it is important to first assess the level of influence these three constructs are at when it comes to the intention of an individual to perform the behavior. To begin developing a proper Integrated Behavior Model for a particular population, interviews should be conducted on individuals present in that population to obtain information related to the behavioral, normative, efficacy, and control beliefs for the identified behavior. Open-ended elicitation interviews help to identify behavior outcomes, cultural norms, and environmental barriers for an investigated behavior in a certain population (Glanz, 2008).

These interviews normally consist of approximately 15-20 individuals present within a targeted population that half are intending on performing the investigated behavior or have performed the behavior and half that have not performed the behavior (Glanz, 2008). Elicitation interviews should be conducted to collect four types of information from people within the targeted population. The first type of information focuses on experiential attitude and asks for an individual’s positive or negative feelings when it comes to performing the behavior. The next type of information looks at behavioral beliefs, specifically an individual’s positive or negative outcomes when performing the behavior. The third type encompasses Perceived Norms and asks individuals about people or groups that they associate with that behavior or oppose the studied behavior. The final type of information gathered from these interviews references an individual’s control beliefs and self-efficacy (Glanz, 2008). Questions are asked about environmental facilitators and/or barriers that make the behavior easier or more difficult to perform. Once this information is gathered, measures of the main constructs and determinants can be developed and studies can begin an application process.