Chapter 10: Application of the Theory of Reasoned Action/Theory of Planned Behavior and Integrative Behavioral Model

Measurement and Application of Constructs

Theory of Reasoned Action suggests that a person’s behavior is determined by his/her intention to perform the behavior and that this intention is a function of his/her attitude towards the behavior and is his/her subjective norm. The Theory of Reasoned Action (TRA) was first developed in the late 1960’s by Martin Fishbein and Icek Azjen which focuses on a person’s intention to behave a certain way. The likelihood that an individual will behave in a specific way in certain situations, despite whether the individual does so or not. For instance, someone who is considering quitting smoking has the intention to quit, however, they may or may not follow that intent (Addison-Wesley, 1975).

To have a clear understanding of behavioral intentions, theory of reasoned action focuses in on a person’s attitude towards a behavior, in addition to the subjective norms of influential people and the people around them that could potentially influence those attitudes. Subjective norms are influenced by ones’ perception of the beliefs based on parents, friends, partners, acquaintances and colleagues. This plays a significant factor in how people are influenced in the way they perceive behavior and views.

Reasoned action recognizes that there are factors that limit the influence of attitude on behavior. This theory predicts behavioral intention, which compromises between stopping at attitude predictions and actually predicting behavior. However, it separates behavioral intention from behavior and also discusses factors that limit the influence on behavior. Two constructs that are central to reasoned action theory are behavior beliefs and attitudes toward the behavior. Belief items are casual indicators that illustrate a latent variable whereas the attitude items that reflect the operation of a latent variable. An example of behavioral belief in regard to condom use among homosexual men would be “Always using latex condoms during anal sex during the next two months would reduce my fear of getting AIDS” (Health Behavior and Health Education).

Overall, the theory of reasoned action consists of behavior, intention to perform the behavior, attitudes, subjective norms, and external variables. These factors play a significant role when recognizing the power of attitude on behavior. 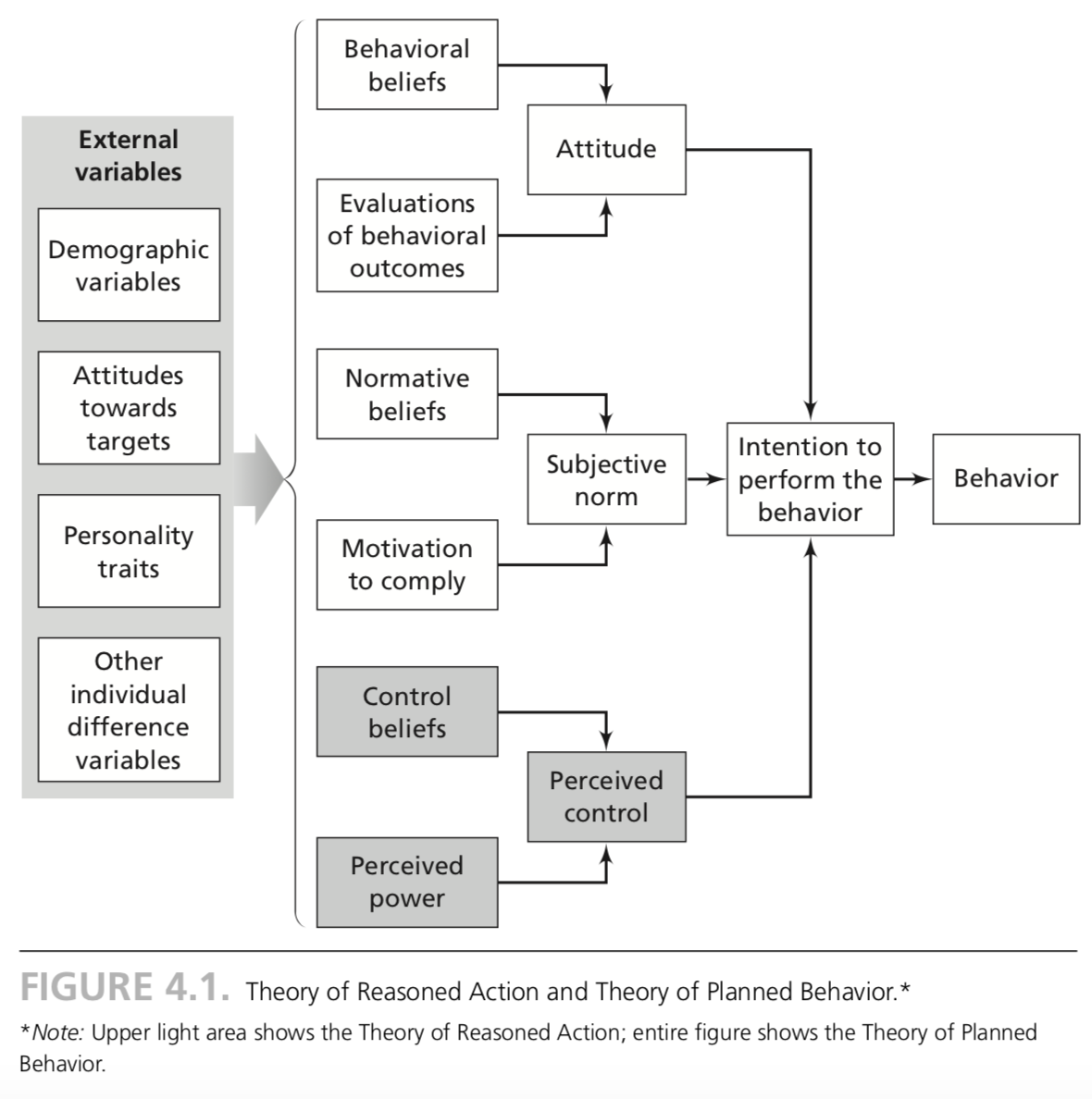 The theory of planned behavior (TPB) is derived from an individual’s attitudes towards a plethora of external influences and their effect on that individual’s behavior. Under the Theory of Reasoned Action (TRA), TPB was added in order to explain behavior where volitional control is reduced (Glanz et al., 2002). Volition can most nearly be described as the cognitive process of an individual that decides on and commits to a particular course of action. In other words, the Theory of Planned Behavior serves to describe actions and behavior of individuals that are theoretically irrational or sporadic. Additionally, the theory serves as a framework for developing intentions. Behavioral intentions form the most proximal predictor of behavior and mediates the effects of attitudes, subjective norms, and perceived behavioral control on behavior (Hagger & Chatzisarantis, 2014). The theory is measured by three main constructs: perceived behavioral control, perceived power, and control beliefs.

The first component, perceived behavioral control, refers to the extent that an individual feels able to enact a behavior (Glanz et al., 2002). An article discussing integrated behavior change models for sedentary individuals cites that perceived control is developed over time through experiences with behaviors. These encounters lead to the development of scripts or schemas regarding the behavior, and were used to evaluate whether to engage in that behavior or not in the future (Hagger & Chatzisarantis, 2014). For example, an obese individual trying to lose weight can measure their perceived behavioral control by determining how difficult or easy it may be for them to exercise.

Similar to perceived control, perceived power, otherwise known as self-efficacy, is one’s ability to determine future intentions by measuring internal and external control of performing a certain behavior. Albert Bandura’s Social Cognitive Theory (2001) contributes efficacy to being a predictive evaluation among various health domains. In regard to smoking cessation, an individual’s perceived ability to overcome events or conditions that may act as a barrier to quitting entails the use of perceived power (Maryland Department of Health).

In order to establish self-efficacy or perceived behavior control, an individual must attain an antecedent belief about the present factors that may facilitate or impede performance of a specific behavior (Glanz et al., 2002). Once circumstances are considered, one can properly gauge their physical or mental ability and level of control they have over their actions/behaviors. This construct is known as control beliefs. In a scenario pertaining to sexual and reproductive health, an individual may intend to exhibit behaviors such as using contraception because he or she has acknowledged the risk of STD’s or pregnancy. The present risk of contracting an STD or getting pregnant is a particular control belief.

The theory of planned behavior and its constructs are applied to a wide array of social and individual psychological analyses. Moreover, the concepts translate into predicting and managing health behavior. A study published in 2016 tested an intervention to helping obese women reduce overeating. The experimental group was administered various audio and written cues that prompted them to use a method called episodic future thinking. Episodic future thinking (EFT) is the psychological process of vividly imagining a future event (O’Neill et al., 2016). By doing so, it forces individuals to perform all three of the constructs in order to produce a realistic vision. In the case of this study, subjects utilized the theory of planned behavior to envision their eating habits. As data had shown from previous lab studies, participants given the EFT intervention showed a decrease in overall calorie intake. Although perceived behavior control, perceived power, and control beliefs were not measured in the study, it can be assumed that those processes were necessary for forming hypothetical images. They likely employed archived schemas from past experiences; a vital process in forming behavior.

The EFT study is only one of the multitude of ways the theory of planned behavior can be applied to health and wellness. Behavior in general is a vital component of interpreting and predicting health outcomes on the individual and population level.