Chapter 14: Connecting the Epidemiological Triad to Other Theories

Triad and the Health Belief Model 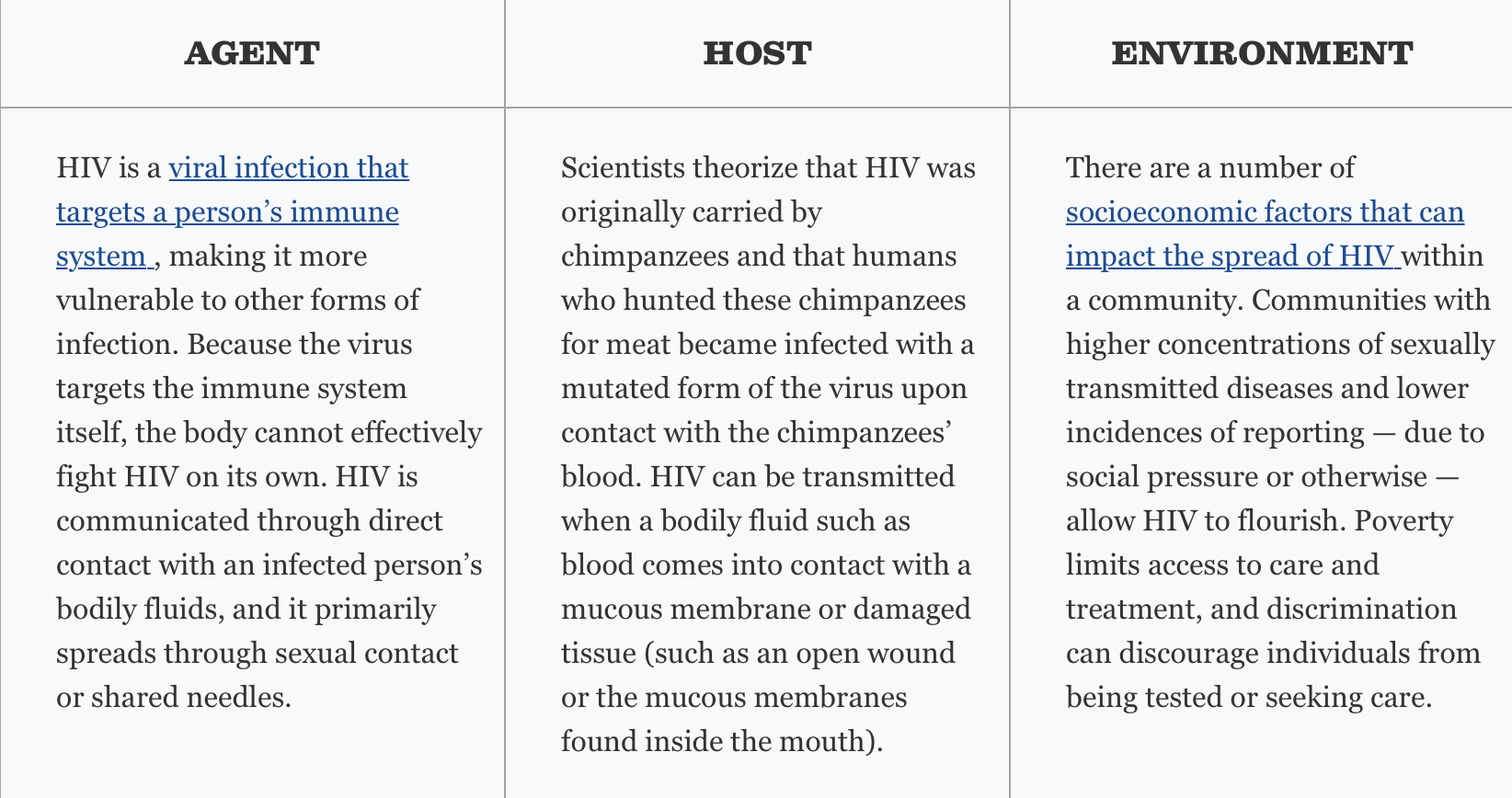 The agent pillar identifies what causes the disease, its characteristics, and even transmission pathways (Nganwa et al, 2010), for this example we will use HIV. HIV can be transmitted through direct contact with the bodily fluids of an infected person as well as shared needles (Nganwa et al, 2010). Constructs like perceived severity and perceived susceptibility may influence how much of a risk a person is at for contracting HIV/AIDS. In terms of perceived susceptibility, if a person does not feel that they are at risk for getting HIV/AIDS then they may not think twice about their behaviors and what the consequences for those behaviors may be. Let’s say a person has never been in an environment where injection drug use takes place, they could think they are at no risk of exposure to HIV, yet they have multiple sexual partners who are not aware of their HIV status. This person could think they are completely safe, but not think twice about their other behaviors that could still be considered high risk.

Next would be perceived severity, if a person was not aware that untreated HIV resulted in AIDS and an entirely weakened immune system, they may think that HIV is easy to live with. On the other end, a person may have a full understanding of HIV and the difficulties of staying healthy while living with HIV. This could motivate them to be conscientious and careful about what kind of behaviors and lifestyle they lead.

The host pillar “identifies and characterizes all hosts whether they are primary, secondary, or paratenic” (Nganwa et al, 2010). Constructs like self-efficacy, perceived benefits, and cues to action all revolve around an individual’s abilities and the benefits that come with those abilities or actions.

Self-efficacy and patient literacy are often linked together, according to Kalichman et al (1999), “patients with limited literacy had less general knowledge of the disease and their own treatment compared to patients with adequate literacy skills, and were less likely to have an undetectable viral load”. If a patient is confident in their abilities to follow their antiretroviral routine, then they are one step closer to lowering their viral load. If a patient is not confident in their ability to adhere to their antiretroviral routine because of lack of understanding, this puts their health at risk. It is important to take these things into consideration when creating interventions.

Perceived benefits can be anything ranging from “If I know my status, I will be able to breastfeed my child without worrying about passing HIV down to my child” or “If I start taking antiretrovirals right away I can lead as close to a healthy life as possible” and even “If I learn my HIV status and I am positive, I can tell my recent partner to consider taking post-exposure prophylaxis as a precaution and keep them as safe as possible”(Center for Disease Control and Prevention, 2018).

Cues to action could be anything that motivates that individual to get tested, use condoms, or be cautious about using clean needles. Examples include knowing an adult or child family member who has HIV, knowing someone who has gotten HIV from shared needles, or just seeing a poster around a college campus encouraging people to know their status.

The environment pillar identifies “the physical, biological and socioeconomic environments for both the host and agent” (Nganwa et al, 2010). Barriers can be either perceived or socioeconomic. Socioeconomic barriers include transportation in the neighborhood a person lives in, stigma, or literacy level. Often times transgender teens do not have access to supportive transgender affirming care which can put them at risk of HIV (Fisher et al, 2018). As for perceived barriers, a person may think they are too busy to get tested or even the fear of testing positive for HIV (White et al, 2014).