Axial Skeleton – The Vertebral Column and The Thoracic Cage

Regions of the Vertebral Column 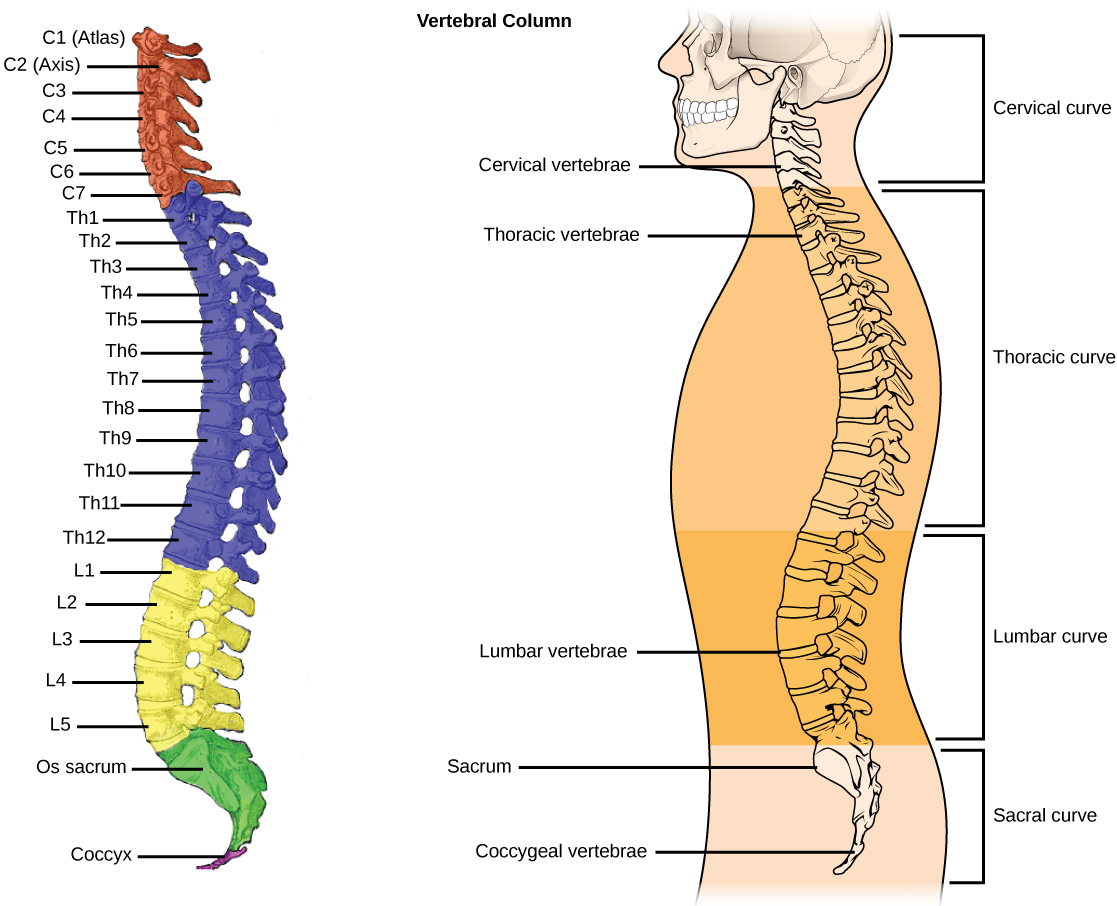 The vertebral column originally develops as a series of 33 vertebrae, but this number is eventually reduced to 24 vertebrae, plus the sacrum and coccyx. The vertebral column is subdivided into five regions, with the vertebrae in each area named for that region and numbered in descending order. In the neck, there are seven cervical vertebrae, each designated with the letter “C” followed by its number. Superiorly, the C1 vertebra articulates (forms a joint) with the occipital condyles of the skull. Inferiorly, C1 articulates with the C2 vertebra, and so on. Below these are the 12 thoracic vertebrae, designated T1–T12. The lower back contains the L1–L5 lumbar vertebrae. The single sacrum, which is also part of the pelvis, is formed by the fusion of five sacral vertebrae. Similarly, the coccyx, or tailbone, results from the fusion of four small coccygeal vertebrae. However, the sacral and coccygeal fusions do not start until age 20 and are not completed until middle age.

Curvatures of the Vertebral Column

The adult vertebral column does not form a straight line, but instead has four curvatures along its length (see Figure 1). These curves increase the vertebral column’s strength, flexibility, and ability to absorb shock. When the load on the spine is increased, by carrying a heavy backpack for example, the curvatures increase in depth (become more curved) to accommodate the extra weight. They then spring back when the weight is removed. The four adult curvatures are classified as either primary or secondary curvatures. Primary curves are retained from the original fetal curvature, while secondary curvatures develop after birth.

A secondary curve develops gradually after birth as the child learns to sit upright, stand, and walk. Secondary curves are concave posteriorly, opposite in direction to the original fetal curvature. The cervical curve of the neck region develops as the infant begins to hold their head upright when sitting. Later, as the child begins to stand and then to walk, the lumbar curve of the lower back develops. In adults, the lumbar curve is generally deeper in females. 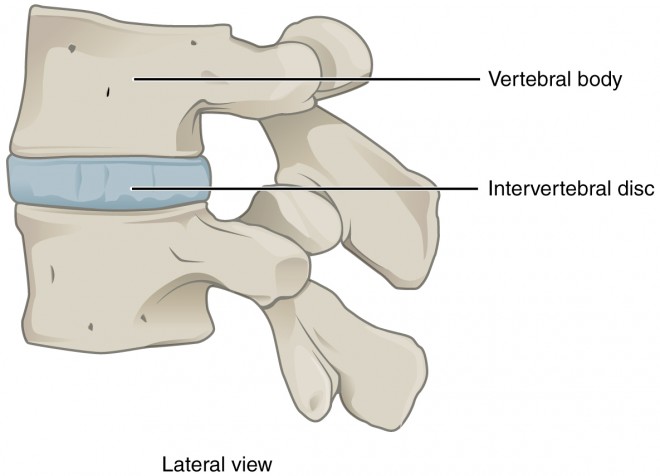 Each intervertebral disc consists of two parts. The anulus fibrosus is the tough, fibrous outer layer of the disc. It forms a circle (anulus = “ring” or “circle”) and is firmly anchored to the outer margins of the adjacent vertebral bodies. Inside is the nucleus pulposus, consisting of a softer, more gel-like material. It has a high water content that serves to resist compression and thus is important for weight bearing. With increasing age, the water content of the nucleus pulposus gradually declines. This causes the disc to become thinner, decreasing total body height somewhat, and reduces the flexibility and range of motion of the disc, making bending more difficult.

The gel-like nature of the nucleus pulposus also allows the intervertebral disc to change shape as one vertebra rocks side to side or forward and back in relation to its neighbors during movements of the vertebral column. Thus, bending forward causes compression of the anterior portion of the disc but expansion of the posterior disc. If the posterior anulus fibrosus is weakened due to injury or increasing age, the pressure exerted on the disc when bending forward and lifting a heavy object can cause the nucleus pulposus to protrude posteriorly through the anulus fibrosus, resulting in a herniated disc (“ruptured” or “slipped” disc) (Figure 3). The posterior bulging of the nucleus pulposus can cause compression of a spinal nerve at the point where it exits through the intervertebral foramen, with resulting pain and/or muscle weakness in those body regions supplied by that nerve. The most common sites for disc herniation are the L4/L5 or L5/S1 intervertebral discs, which can cause sciatica, a widespread pain that radiates from the lower back down the thigh and into the leg. Similar injuries of the C5/C6 or C6/C7 intervertebral discs, following forcible hyperflexion of the neck from a collision accident or football injury, can produce pain in the neck, shoulder, and upper limb. 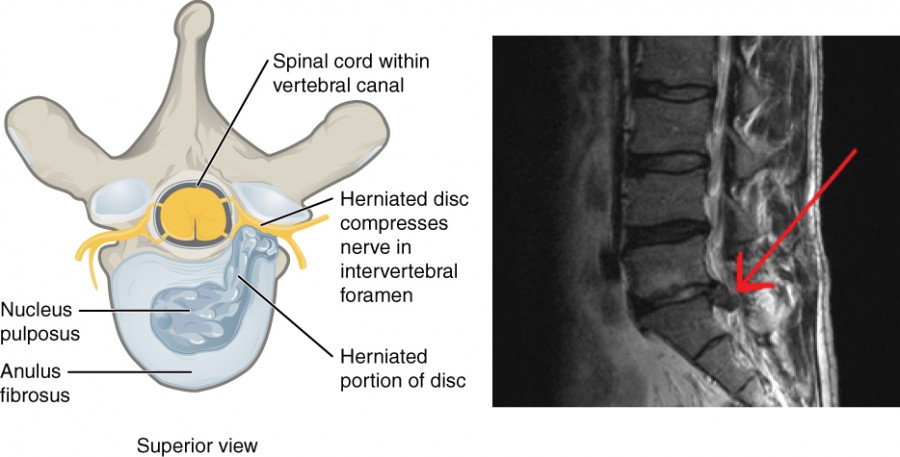 Figure 3. Herniated Intervertebral Disc. Weakening of the anulus fibrosus can result in herniation (protrusion) of the nucleus pulposus and compression of a spinal nerve, resulting in pain and/or muscle weakness in the body regions supplied by that nerve.

DISORDERS OF THE VERTEBRAL COLUMN

Developmental anomalies, pathological changes, or obesity can enhance the normal vertebral column curves, resulting in the development of abnormal or excessive curvatures (Figure 4). Kyphosis, also referred to as humpback or hunchback, is an excessive posterior curvature of the thoracic region. This can develop when osteoporosis causes weakening and erosion of the anterior portions of the upper thoracic vertebrae, resulting in their gradual collapse (Figure 4). Lordosis, or swayback, is an excessive anterior curvature of the lumbar region and is most commonly associated with obesity or late pregnancy. The accumulation of body weight in the abdominal region results an anterior shift in the line of gravity that carries the weight of the body. This causes in an anterior tilt of the pelvis and a pronounced enhancement of the lumbar curve. 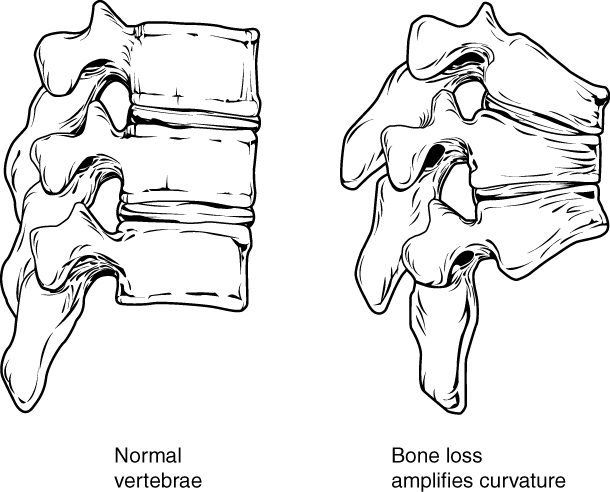 Figure 4. Osteoporosis. Osteoporosis is an age-related disorder that causes the gradual loss of bone density and strength. When the thoracic vertebrae are affected, there can be a gradual collapse of the vertebrae. This results in kyphosis, an excessive curvature of the thoracic region.

Scoliosis is an abnormal, lateral curvature, accompanied by twisting of the vertebral column. Compensatory curves may also develop in other areas of the vertebral column to help maintain the head positioned over the feet. Scoliosis is the most common vertebral abnormality among girls. The cause is usually unknown, but it may result from weakness of the back muscles, defects such as differential growth rates in the right and left sides of the vertebral column, or differences in the length of the lower limbs. When present, scoliosis tends to get worse during adolescent growth spurts. Although most individuals do not require treatment, a back brace may be recommended for growing children. In extreme cases, surgery may be required.

Excessive vertebral curves can be identified while an individual stands in the anatomical position. Observe the vertebral profile from the side and then from behind to check for kyphosis or lordosis. Then have the person bend forward. If scoliosis is present, an individual will have difficulty in bending directly forward, and the right and left sides of the back will not be level with each other in the bent position.

Chiropractors are health professionals who use nonsurgical techniques to help patients with musculoskeletal system problems that involve the bones, muscles, ligaments, tendons, or nervous system. They treat problems such as neck pain, back pain, joint pain, or headaches. Chiropractors focus on the patient’s overall health and can also provide counseling related to lifestyle issues, such as diet, exercise, or sleep problems. If needed, they will refer the patient to other medical specialists.

Chiropractors use a drug-free, hands-on approach for patient diagnosis and treatment. They will perform a physical exam, assess the patient’s posture and spine, and may perform additional diagnostic tests, including taking X-ray images. They primarily use manual techniques, such as spinal manipulation, to adjust the patient’s spine or other joints. They can recommend therapeutic or rehabilitative exercises, and some also include acupuncture, massage therapy, or ultrasound as part of the treatment program. In addition to those in general practice, some chiropractors specialize in sport injuries, neurology, orthopaedics, pediatrics, nutrition, internal disorders, or diagnostic imaging.

To become a chiropractor, students must have 3–4 years of undergraduate education, attend an accredited, four-year Doctor of Chiropractic (D.C.) degree program, and pass a licensure examination to be licensed for practice in their state. With the aging of the baby-boom generation, employment for chiropractors is expected to increase.

The thoracic cage (rib cage) forms the thorax (chest) portion of the body. It consists of the 12 pairs of ribs with their costal cartilages and the sternum . The ribs are anchored posteriorly to the 12 thoracic vertebrae (T1–T12). The thoracic cage protects the heart and lungs. 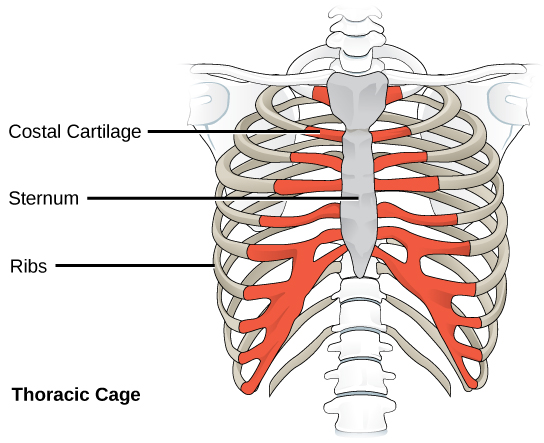 Figure 6: The thoracic cage, or rib cage, protects the heart and the lungs. (credit: modification of work by NCI, NIH)