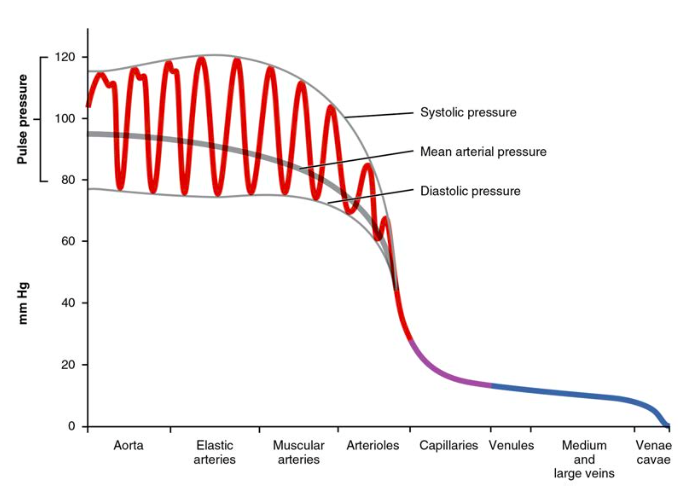 Figure 1. The graph shows the components of blood pressure throughout the blood vessels, including systolic, diastolic, mean arterial, and pulse pressures.

Mean arterial pressure (MAP) represents the “average” pressure of blood in the arteries, that is, the average force driving blood into vessels that serve the tissues. Normally, the MAP falls within the range of 70–110 mm Hg. If the value falls below 60 mm Hg for an extended time, blood pressure will not be high enough to ensure circulation to and through the tissues, which results in ischemia, or insufficient blood flow. A condition called hypoxia, inadequate oxygenation of tissues, commonly accompanies ischemia. The term hypoxemia refers to low levels of oxygen in systemic arterial blood. Neurons are especially sensitive to hypoxia and may die or be damaged if blood flow and oxygen supplies are not quickly restored.

After blood is ejected from the heart, elastic fibers in the arteries help maintain a high-pressure gradient as they expand to accommodate the blood, then recoil. This expansion and recoiling effect, known as the pulse, can be palpated manually or measured electronically. 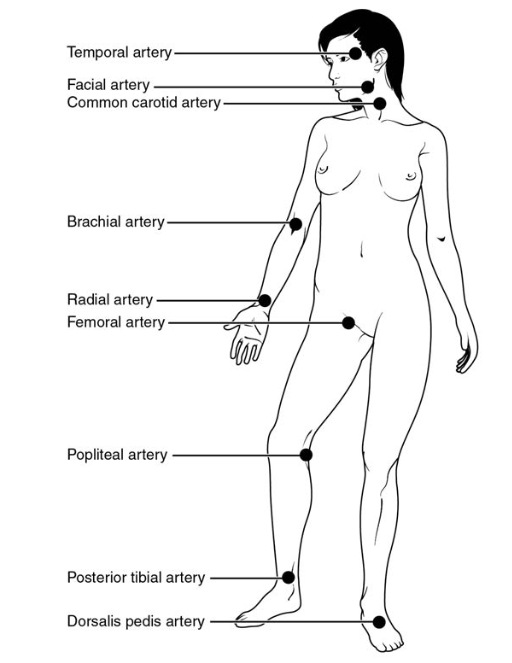 Figure 2. The pulse is most readily measured at the radial artery, but can be measured at any of the pulse points shown.

Because pulse indicates heart rate, it is measured clinically to provide clues to a patient’s state of health. It is recorded as beats per minute. A high or irregular pulse rate can be caused by physical activity or other temporary factors, but it may also indicate a heart condition. The pulse strength indicates the strength of ventricular contraction and cardiac output. If the pulse is strong, then systolic pressure is high. If it is weak, systolic pressure has fallen, and medical intervention may be warranted.

Although there are five recognized Korotkoff sounds, only two are normally recorded. Initially, no sounds are heard since there is no blood flow through the vessels, but as air pressure drops, the cuff relaxes, and blood flow returns to the arm. As shown in Figure 3, the first sound heard through the stethoscope—the first Korotkoff sound—indicates systolic pressure. As more air is released from the cuff, blood is able to flow freely through the brachial artery and all sounds disappear. The point at which the last sound is heard is recorded as the patient’s diastolic pressure. 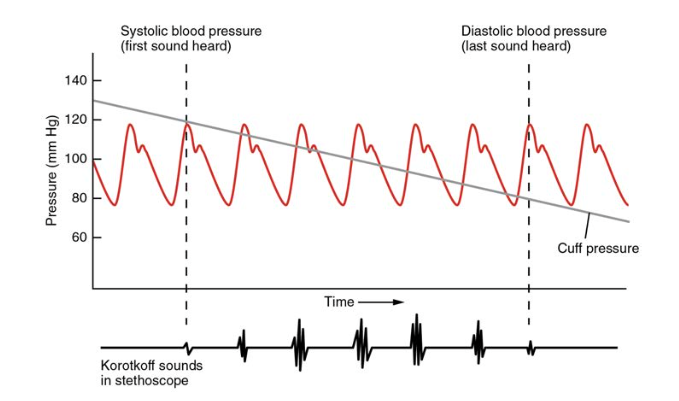 Figure 3. When pressure in a sphygmomanometer cuff is released, a clinician can hear the Korotkoff sounds. In this graph, a blood pressure tracing is aligned to a measurement of systolic and diastolic pressures.

Figure 4 compares vessel diameter, total cross-sectional area, average blood pressure, and blood velocity through the systemic vessels. Notice in parts (a) and (b) that the total cross-sectional area of the body’s capillary beds is far greater than any other type of vessel. Although the diameter of an individual capillary is significantly smaller than the diameter of an arteriole, there are vastly more capillaries in the body than there are other types of blood vessels. Part (c) shows that blood pressure drops unevenly as blood travels from arteries to arterioles, capillaries, venules, and veins, and encounters greater resistance. However, the site of the most precipitous drop, and the site of greatest resistance, is the arterioles. This explains why vasodilation and vasoconstriction of arterioles play more significant roles in regulating blood pressure than do the vasodilation and vasoconstriction of other vessels. 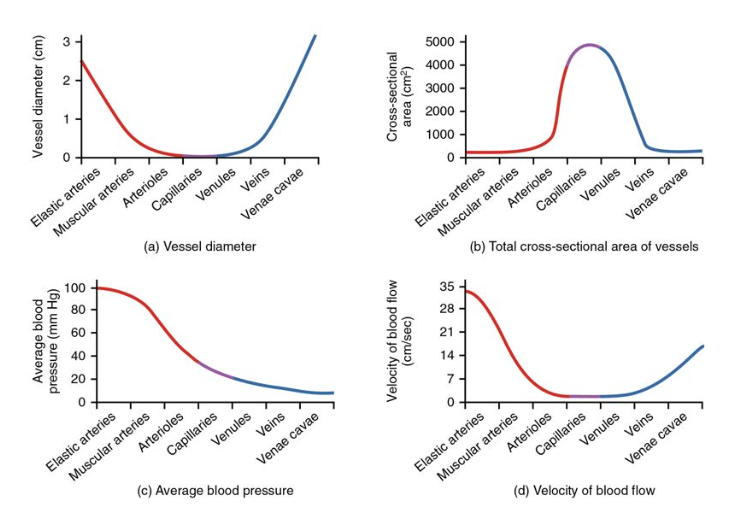 Figure 4. The relationships among blood vessels that can be compared include (a) vessel diameter, (b) total cross-sectional area, (c) average blood pressure, and (d) velocity of blood flow.

Part (d) shows that the velocity (speed) of blood flow decreases dramatically as the blood moves from arteries to arterioles to capillaries. This slow flow rate allows more time for exchange processes to occur. As blood flows through the veins, the rate of velocity increases, as blood is returned to the heart.

Disorders of the Cardiovascular System: Arteriosclerosis

Compliance allows an artery to expand when blood is pumped through it from the heart, and then to recoil after the surge has passed. This helps promote blood flow. In arteriosclerosis, compliance is reduced, and pressure and resistance within the vessel increase. This is a leading cause of hypertension and coronary heart disease, as it causes the heart to work harder to generate a pressure great enough to overcome the resistance.

Arteriosclerosis begins with injury to the endothelium of an artery, which may be caused by irritation from high blood glucose, infection, tobacco use, excessive blood lipids, and other factors. Artery walls that are constantly stressed by blood flowing at high pressure are also more likely to be injured—which means that hypertension can promote arteriosclerosis, as well as result from it.

Recall that tissue injury causes inflammation. As inflammation spreads into the artery wall, it weakens and scars it, leaving it stiff (sclerotic). As a result, compliance is reduced. Moreover, circulating triglycerides and cholesterol can seep between the damaged lining cells and become trapped within the artery wall, where they are frequently joined by leukocytes, calcium, and cellular debris. Eventually, this buildup, called plaque, can narrow arteries enough to impair blood flow. The term for this condition, atherosclerosis (athero- = “porridge”) describes the mealy deposits. 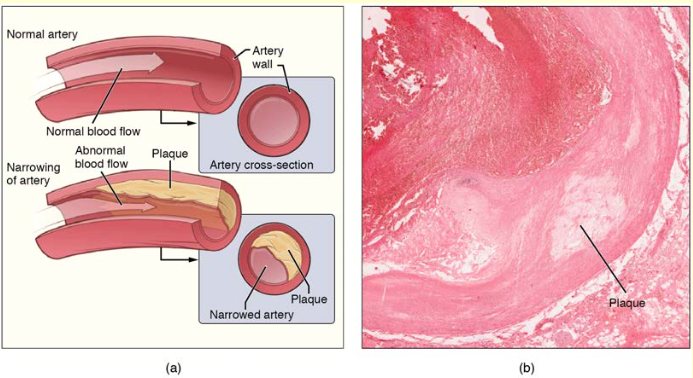 Figure 5. Atherosclerosis. (a) Atherosclerosis can result from plaques formed by the buildup of fatty, calcified deposits in an artery. (b) Plaques can also take other forms, as shown in this micrograph of a coronary artery that has a buildup of connective tissue within the artery wall. LM × 40. (Micrograph provided by the Regents of University of Michigan Medical School © 2012)

Sometimes a plaque can rupture, causing microscopic tears in the artery wall that allow blood to leak into the tissue on the other side. When this happens, platelets rush to the site to clot the blood. This clot can further obstruct the artery and—if it occurs in a coronary or cerebral artery—cause a sudden heart attack or stroke. Alternatively, plaque can break off and travel through the bloodstream as an embolus until it blocks a more distant, smaller artery.

Even without total blockage, vessel narrowing leads to ischemia—reduced blood flow—to the tissue region “downstream” of the narrowed vessel. Ischemia in turn leads to hypoxia—decreased supply of oxygen to the tissues. Hypoxia involving cardiac muscle or brain tissue can lead to cell death and severe impairment of brain or heart function.

A major risk factor for both arteriosclerosis and atherosclerosis is advanced age, as the conditions tend to progress over time. Arteriosclerosis is normally defined as the more generalized loss of compliance, “hardening of the arteries,” whereas atherosclerosis is a more specific term for the build-up of plaque in the walls of the vessel and is a specific type of arteriosclerosis. There is also a distinct genetic component, and pre-existing hypertension and/or diabetes also greatly increase the risk. However, obesity, poor nutrition, lack of physical activity, and tobacco use all are major risk factors.

Treatment includes lifestyle changes, such as weight loss, smoking cessation, regular exercise, and adoption of a diet low in sodium and saturated fats. Medications to reduce cholesterol and blood pressure may be prescribed. For blocked coronary arteries, surgery is warranted. In angioplasty, a catheter is inserted into the vessel at the point of narrowing, and a second catheter with a balloon-like tip is inflated to widen the opening. To prevent subsequent collapse of the vessel, a small mesh tube called a stent is often inserted. In an endarterectomy, plaque is surgically removed from the walls of a vessel. This operation is typically performed on the carotid arteries of the neck, which are a prime source of oxygenated blood for the brain. In a coronary bypass procedure, a non-vital superficial vessel from another part of the body (often the great saphenous vein) or a synthetic vessel is inserted to create a path around the blocked area of a coronary artery.