Structure and Function of Blood Vessels 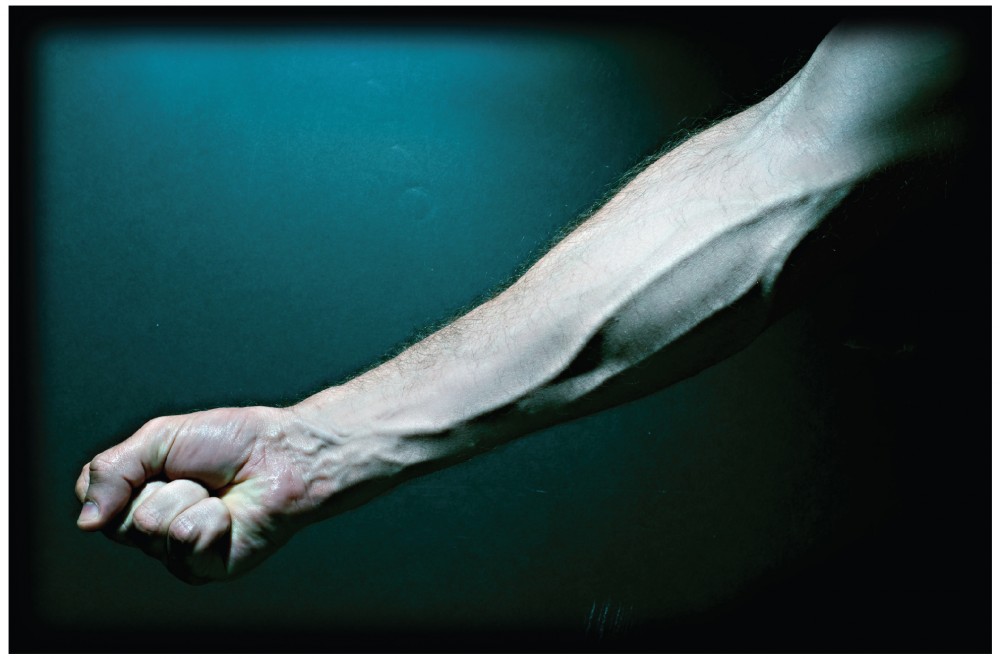 Figure 1. While most blood vessels are located deep from the surface and are not visible, the superficial veins of the upper limb provide an indication of the extent, prominence, and importance of these structures to the body. (credit: Colin Davis)

In this chapter, you will learn about the vascular part of the cardiovascular system, that is, the vessels that transport blood throughout the body and provide the physical site where gases, nutrients, and other substances are exchanged with body cells. When vessel functioning is reduced, blood-borne substances do not circulate effectively throughout the body. As a result, tissue injury occurs, metabolism is impaired, and the functions of every bodily system are threatened.

Arteries and veins transport blood in two distinct circuits: the systemic circuit and the pulmonary circuit. Systemic arteries provide blood rich in oxygen to the body’s tissues. The blood returned to the heart through systemic veins has less oxygen, since much of the oxygen carried by the arteries has been delivered to the cells. In contrast, in the pulmonary circuit, arteries carry blood low in oxygen exclusively to the lungs for gas exchange. Pulmonary veins then return freshly oxygenated blood from the lungs to the heart to be pumped back out into systemic circulation. Although arteries and veins differ structurally and functionally, they share certain features. 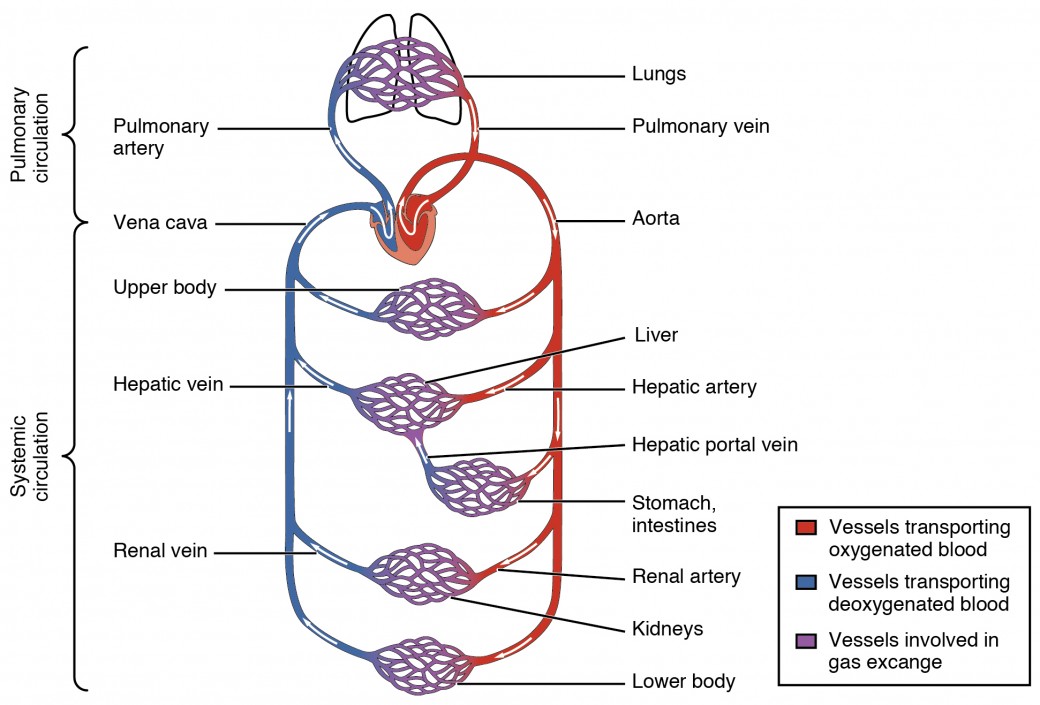 Different types of blood vessels vary slightly in their structures, but they share the same general features. Arteries and arterioles have thicker walls than veins and venules because they are closer to the heart and receive blood that is surging at a far greater pressure (Figure 2). Each type of vessel has a lumen—a hollow passageway through which blood flows. Arteries have smaller lumens than veins, a characteristic that helps to maintain the pressure of blood moving through the system. Together, their thicker walls and smaller diameters give arterial lumens a more rounded appearance in cross section than the lumens of veins. 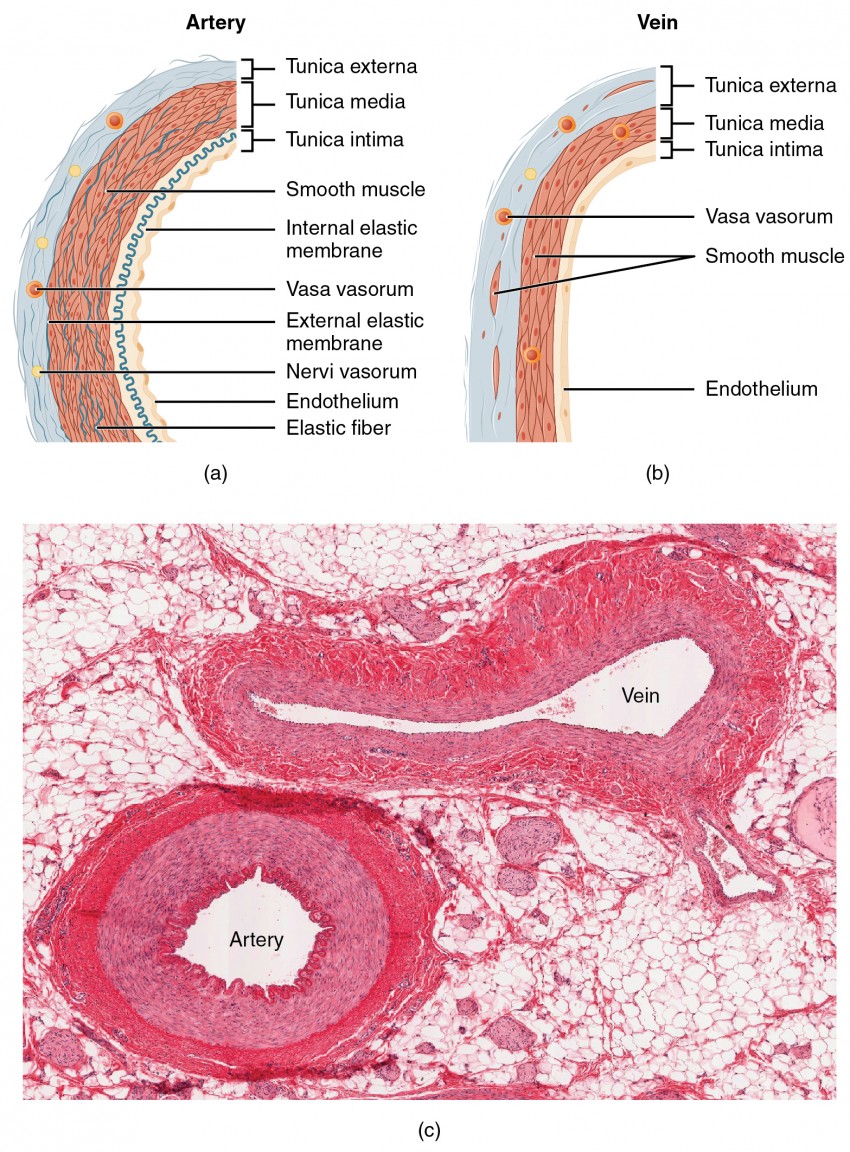 Figure 2. (a) Arteries and (b) veins share the same general features, but the walls of arteries are much thicker because of the higher pressure of the blood that flows through them. (c) A micrograph shows the relative differences in thickness. LM × 160. (Micrograph provided by the Regents of the University of Michigan Medical School © 2012)

Both arteries and veins have the same three distinct tissue layers, called tunics (from the Latin term tunica), for the garments first worn by ancient Romans; the term tunic is also used for some modern garments. From the most interior layer to the outer, these tunics are the tunica intima, the tunica media, and the tunica externa. Table 1 compares and contrasts the tunics of the arteries and veins.

The tunica intima (also called the tunica interna) is composed of epithelial and connective tissue layers. Lining the tunica intima is the specialized simple squamous epithelium called the endothelium, which is continuous throughout the entire vascular system, including the lining of the chambers of the heart. Damage to this endothelial lining and exposure of blood to the collagenous fibers beneath is one of the primary causes of clot formation.

Next to the endothelium is the basement membrane that effectively binds the endothelium to the connective tissue. The basement membrane provides strength while maintaining flexibility, and it is permeable, allowing materials to pass through it. The thin outer layer of the tunica intima contains a small amount of connective tissue that consists primarily of elastic fibers to provide the vessel with additional flexibility; it also contains some collagenous fibers to provide additional strength.

The tunica media is the substantial middle layer of the vessel wall (see Figure 2). It is generally the thickest layer in arteries, and it is much thicker in arteries than it is in veins. The tunica media consists of layers of smooth muscle supported by connective tissue that is primarily made up of elastic fibers, most of which are arranged in circular sheets. Contraction and relaxation of the circular muscles decrease and increase the diameter of the vessel lumen, respectively. Specifically in arteries, vasoconstriction decreases blood flow as the smooth muscle in the walls of the tunica media contracts, making the lumen narrower and increasing blood pressure. Similarly, vasodilation increases blood flow as the smooth muscle relaxes, allowing the lumen to widen and blood pressure to drop. Separating the tunica media from the outer tunica externa in larger arteries is the external elastic membrane (also called the external elastic lamina), which also appears wavy in slides. This structure is not usually seen in smaller arteries, nor is it seen in veins.

An artery is a blood vessel that conducts blood away from the heart. All arteries have relatively thick walls that can withstand the high pressure of blood ejected from the heart. However, those close to the heart have the thickest walls, containing a high percentage of elastic fibers in all three of their tunics. This type of artery is known as an elastic artery (see Figure 3). Their abundant elastic fibers allow them to expand, as blood pumped from the ventricles passes through them, and then to recoil after the surge has passed.

Farther from the heart, where the surge of blood has dampened, the percentage of elastic fibers in an artery’s tunica intima decreases and the amount of smooth muscle in its tunica media increases. The artery at this point is described as a muscular artery. Their thick tunica media allows muscular arteries to play a leading role in vasoconstriction. In contrast, their decreased quantity of elastic fibers limits their ability to expand. Fortunately, because the blood pressure has eased by the time it reaches these more distant vessels, elasticity has become less important.

Notice that although the distinctions between elastic and muscular arteries are important, there is no “line of demarcation” where an elastic artery suddenly becomes muscular. Rather, there is a gradual transition as the vascular tree repeatedly branches. In turn, muscular arteries branch to distribute blood to the vast network of arterioles. For this reason, a muscular artery is also known as a distributing artery.

An arteriole is a very small artery that leads to a capillary. Arterioles have the same three tunics as the larger vessels, but the thickness of each is greatly diminished. The critical endothelial lining of the tunica intima is intact. The tunica media is restricted to one or two smooth muscle cell layers in thickness. The tunica externa remains but is very thin (see Figure 3).

A capillary is a microscopic channel that supplies blood to the tissues themselves. Exchange of gases and other substances occurs in the capillaries between the blood and the surrounding cells and their tissue fluid (interstitial fluid). The diameter of a capillary lumen is just barely wide enough for an erythrocyte to squeeze through.

The wall of a capillary consists of the endothelial layer surrounded by a basement membrane with occasional smooth muscle fibers. For capillaries to function, their walls must be leaky, allowing substances to pass through. There are three major types of capillaries, which differ according to their degree of “leakiness:” continuous, fenestrated, and sinusoid capillaries.

The most common type of capillary, the continuous capillary, is found in almost all vascularized tissues. Continuous capillaries are characterized by a complete endothelial lining with tight junctions between endothelial cells. Substances that can pass between cells include metabolic products, such as glucose, water, and small hydrophobic molecules like gases and hormones, as well as various leukocytes.

A fenestrated capillary is one that has pores (or fenestrations) that make the capillary permeable to larger molecules. Fenestrated capillaries are common in the small intestine, which is the primary site of nutrient absorption, as well as in the kidneys, which filter the blood. They are also found in the choroid plexus of the brain and many endocrine structures, including the hypothalamus, pituitary, pineal, and thyroid glands.

A sinusoid capillary (or sinusoid) is the least common type of capillary. Sinusoid capillaries are flattened, and they have extensive intercellular gaps and incomplete basement membranes, in addition to intercellular clefts and fenestrations. These very large openings allow for the passage of the largest molecules, including plasma proteins and even cells. Blood flow through sinusoids is very slow, allowing more time for exchange of gases, nutrients, and wastes. Sinusoids are found in the liver and spleen, bone marrow, lymph nodes (where they carry lymph, not blood), and many endocrine glands including the pituitary and adrenal glands. 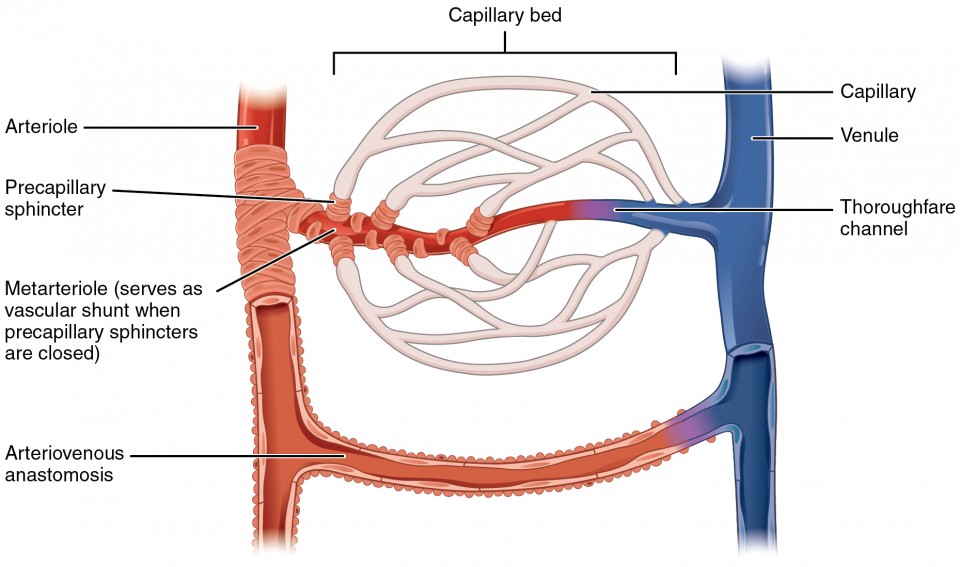 A venule is an extremely small vein. Postcapillary venules join multiple capillaries exiting from a capillary bed. Multiple venules join to form veins. The walls of venules consist of endothelium, a thin middle layer with a few muscle cells and elastic fibers, plus an outer layer of connective tissue fibers that constitute a very thin tunica externa. Venules as well as capillaries are the primary sites of emigration or diapedesis, in which the white blood cells adhere to the endothelial lining of the vessels and then squeeze through adjacent cells to enter the tissue fluid.

A vein is a blood vessel that conducts blood toward the heart. Compared to arteries, veins are thin-walled vessels with large and irregular lumens (see Figure 6). 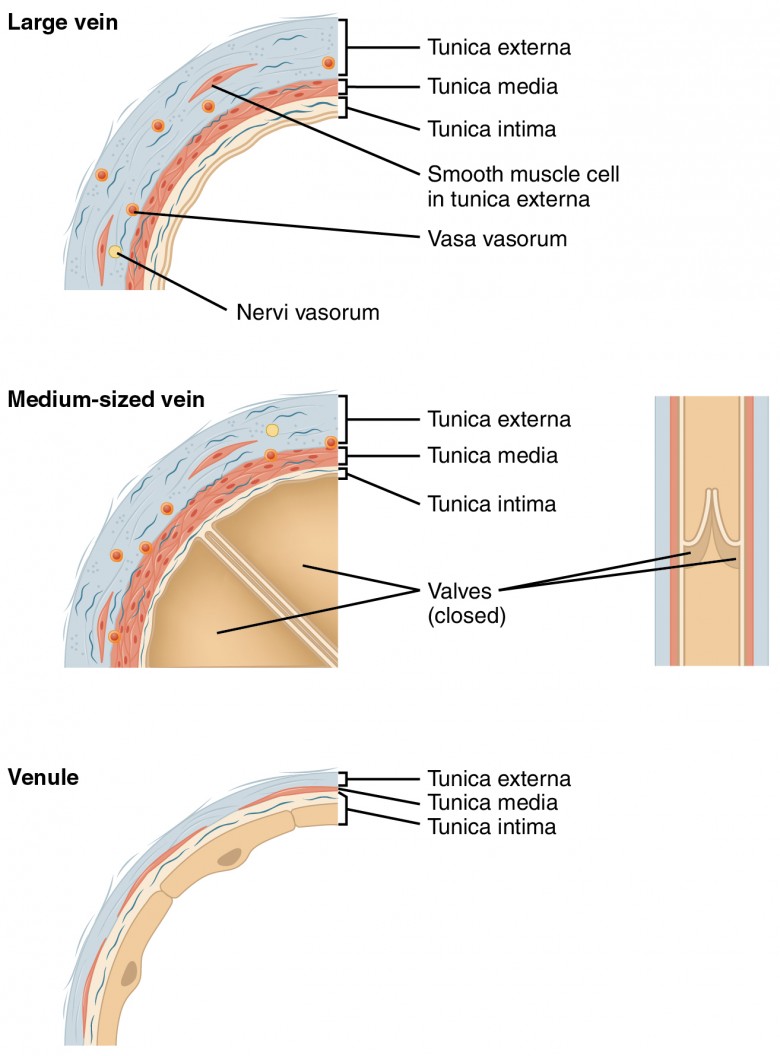 Figure 6. Many veins have valves to prevent back flow of blood, whereas venules do not. In terms of scale, the diameter of a venule is measured in micrometers compared to millimeters for veins.

Because they are low-pressure vessels, larger veins are commonly equipped with valves that promote the unidirectional flow of blood toward the heart and prevent backflow toward the capillaries caused by the inherent low blood pressure in veins as well as the pull of gravity. Table 2 compares the features of arteries and veins.

Disorders of the Cardiovascular System: Edema and Varicose Veins

Despite the presence of valves and the contributions of other anatomical and physiological adaptations, over the course of a day, some blood will inevitably pool, especially in the lower limbs, due to the pull of gravity. Any blood that accumulates in a vein will increase the pressure within it, which can then be reflected back into the smaller veins, venules, and eventually even the capillaries. Increased pressure will promote the flow of fluids out of the capillaries and into the interstitial fluid. The presence of excess tissue fluid around the cells leads to a condition called edema. 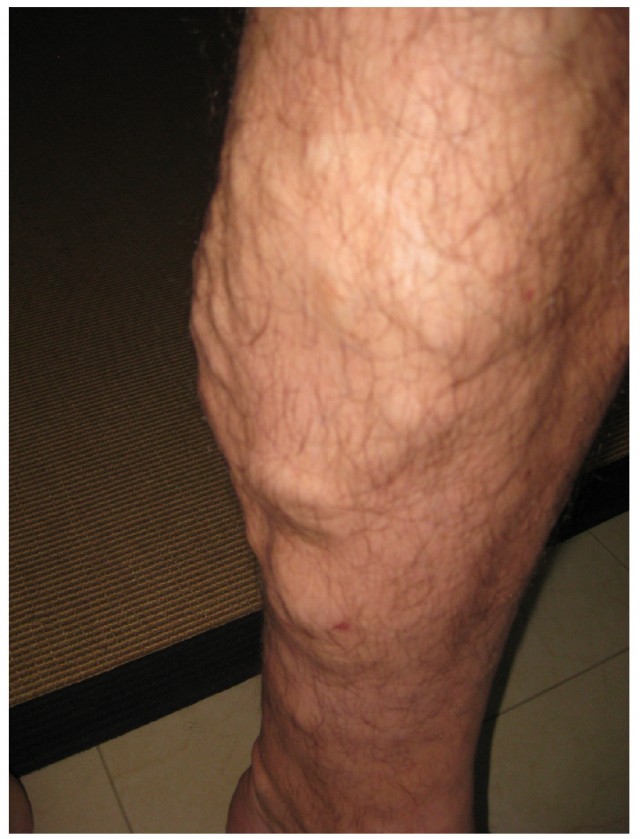 Edema may be accompanied by varicose veins, especially in the superficial veins of the legs. This disorder arises when defective valves allow blood to accumulate within the veins, causing them to distend, twist, and become visible on the surface of the integument. Varicose veins may occur in both sexes, but are more common in women and are often related to pregnancy. More than simple cosmetic blemishes, varicose veins are often painful and sometimes itchy or throbbing. Without treatment, they tend to grow worse over time. The use of support hose, as well as elevating the feet and legs whenever possible, may be helpful in alleviating this condition. Laser surgery and interventional radiologic procedures can reduce the size and severity of varicose veins. Severe cases may require conventional surgery to remove the damaged vessels. As there are typically redundant circulation patterns, that is, anastomoses, for the smaller and more superficial veins, removal does not typically impair the circulation. There is evidence that patients with varicose veins suffer a greater risk of developing a thrombus or clot.