The erythrocyte, commonly known as a red blood cell (or RBC), is by far the most common formed element: A single drop of blood contains millions of erythrocytes and just thousands of leukocytes. Specifically, males have about 5.4 million erythrocytes per microliter (µL) of blood, and females have approximately 4.8 million per µL. In fact, erythrocytes are estimated to make up about 25 percent of the total cells in the body. As you can imagine, they are quite small cells, with a mean diameter of only about 7–8 micrometers (µm). The primary functions of erythrocytes are to pick up inhaled oxygen from the lungs and transport it to the body’s tissues, and to pick up some (about 24 percent) carbon dioxide waste at the tissues and transport it to the lungs for exhalation. Erythrocytes remain within the vascular network. Although leukocytes typically leave the blood vessels to perform their defensive functions, movement of erythrocytes from the blood vessels is abnormal.

Shape and Structure of Erythrocytes 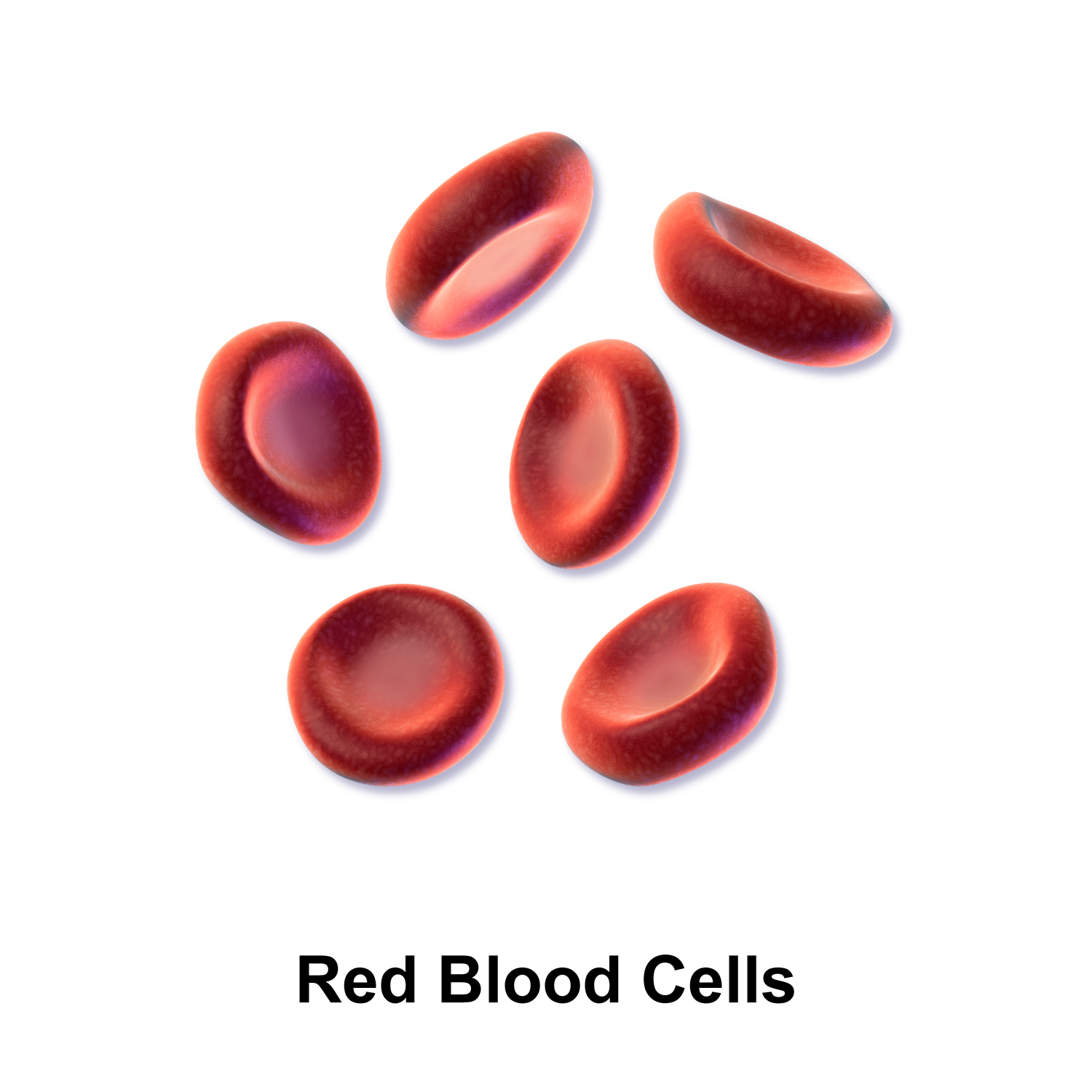 As an erythrocyte matures in the red bone marrow, it extrudes its nucleus and most of its other organelles. Erythrocytes are biconcave disks; that is, they are plump at their periphery and very thin in the center. Since they lack most organelles, there is more interior space for the presence of the hemoglobin molecules that, as you will see shortly, transport gases. The biconcave shape also provides a greater surface area across which gas exchange can occur, relative to its volume; a sphere of a similar diameter would have a lower surface area-to-volume ratio. In the capillaries, the oxygen carried by the erythrocytes can diffuse into the plasma and then through the capillary walls to reach the cells, whereas some of the carbon dioxide produced by the cells as a waste product diffuses into the capillaries to be picked up by the erythrocytes. Capillary beds are extremely narrow, slowing the passage of the erythrocytes and providing an extended opportunity for gas exchange to occur. However, the space within capillaries can be so minute that, despite their own small size, erythrocytes may have to fold in on themselves if they are to make their way through. Fortunately, their structural proteins like spectrin are flexible, allowing them to bend over themselves to a surprising degree, then spring back again when they enter a wider vessel. In wider vessels, erythrocytes may stack up much like a roll of coins, forming a rouleaux, from the French word for “roll.”

Shape of Red Blood Cells Erythrocytes are biconcave discs with very shallow centers. This shape optimizes the ratio of surface area to volume, facilitating gas exchange. It also enables them to fold up as they move through narrow blood vessels.

Hemoglobin is a large molecule made up of proteins and iron. It consists of four folded chains of a protein called globin, designated alpha 1 and 2, and beta 1 and 2. Each of these globin molecules is bound to a red pigment molecule called heme, which contains an ion of iron (Fe2+).

Figure 2: Hemoglobin (a) A molecule of hemoglobin contains four globin proteins, each of which is bound to one molecule of the iron-containing pigment heme. (b) A single erythrocyte can contain 300 million hemoglobin molecules, and thus more than 1 billion oxygen molecules.

In the lungs, hemoglobin picks up oxygen, which binds to the iron ions, forming oxyhemoglobin. The bright red, oxygenated hemoglobin travels to the body tissues, where it releases some of the oxygen molecules, becoming darker red deoxyhemoglobin, sometimes referred to as reduced hemoglobin. Oxygen release depends on the need for oxygen in the surrounding tissues, so hemoglobin rarely if ever leaves all of its oxygen behind. In the capillaries, carbon dioxide enters the bloodstream. About 76 percent dissolves in the plasma, some of it remaining as dissolved CO2, and the remainder forming bicarbonate ion. About 23–24 percent of it binds to the amino acids in hemoglobin, forming a molecule known as carbaminohemoglobin. From the capillaries, the hemoglobin carries carbon dioxide back to the lungs, where it releases it for exchange of oxygen.

Changes in the levels of RBCs can have significant effects on the body’s ability to effectively deliver oxygen to the tissues. Ineffective hematopoiesis results in insufficient numbers of RBCs and results in one of several forms of anemia. An overproduction of RBCs produces a condition called polycythemia. The primary drawback with polycythemia is not a failure to directly deliver enough oxygen to the tissues, but rather the increased viscosity of the blood, which makes it more difficult for the heart to circulate the blood.

In patients with insufficient hemoglobin, the tissues may not receive sufficient oxygen, resulting in another form of anemia. In determining oxygenation of tissues, the value of greatest interest in healthcare is the percent saturation; that is, the percentage of hemoglobin sites occupied by oxygen in a patient’s blood. Clinically this value is commonly referred to simply as “percent sat.”

Percent saturation is normally monitored using a device known as a pulse oximeter, which is applied to a thin part of the body, typically the tip of the patient’s finger. The device works by sending two different wavelengths of light (one red, the other infrared) through the finger and measuring the light with a photodetector as it exits. Hemoglobin absorbs light differentially depending upon its saturation with oxygen. The machine calibrates the amount of light received by the photodetector against the amount absorbed by the partially oxygenated hemoglobin and presents the data as percent saturation. Normal pulse oximeter readings range from 95–100 percent. Lower percentages reflect hypoxemia, or low blood oxygen. The term hypoxia is more generic and simply refers to low oxygen levels. Oxygen levels are also directly monitored from free oxygen in the plasma typically following an arterial stick. When this method is applied, the amount of oxygen present is expressed in terms of partial pressure of oxygen or simply pO2 and is typically recorded in units of millimeters of mercury, mm Hg.

The kidneys filter about 180 liters (~380 pints) of blood in an average adult each day, or about 20 percent of the total resting volume, and thus serve as ideal sites for receptors that determine oxygen saturation. In response to hypoxemia, less oxygen will exit the vessels supplying the kidney, resulting in hypoxia (low oxygen concentration) in the tissue fluid of the kidney where oxygen concentration is actually monitored. Interstitial fibroblasts within the kidney secrete EPO, thereby increasing erythrocyte production and restoring oxygen levels. In a classic negative-feedback loop, as oxygen saturation rises, EPO secretion falls, and vice versa, thereby maintaining homeostasis. Populations dwelling at high elevations, with inherently lower levels of oxygen in the atmosphere, naturally maintain a hematocrit higher than people living at sea level. Consequently, people traveling to high elevations may experience symptoms of hypoxemia, such as fatigue, headache, and shortness of breath, for a few days after their arrival. In response to the hypoxemia, the kidneys secrete EPO to step up the production of erythrocytes until homeostasis is achieved once again. To avoid the symptoms of hypoxemia, or altitude sickness, mountain climbers typically rest for several days to a week or more at a series of camps situated at increasing elevations to allow EPO levels and, consequently, erythrocyte counts to rise. When climbing the tallest peaks, such as Mt. Everest and K2 in the Himalayas, many mountain climbers rely upon bottled oxygen as they near the summit.

Production of erythrocytes in the marrow occurs at the staggering rate of more than 2 million cells per second. For this production to occur, a number of raw materials must be present in adequate amounts. These include the same nutrients that are essential to the production and maintenance of any cell, such as glucose, lipids, and amino acids. However, erythrocyte production also requires several trace elements:

Erythrocytes live up to 120 days in the circulation, after which the worn-out cells are removed by a type of myeloid phagocytic cell called a macrophage, located primarily within the bone marrow, liver, and spleen. The components of the degraded erythrocytes’ hemoglobin are further processed as follows:

The breakdown pigments formed from the destruction of hemoglobin can be seen in a variety of situations. At the site of an injury, biliverdin from damaged RBCs produces some of the dramatic colors associated with bruising. With a failing liver, bilirubin cannot be removed effectively from circulation and causes the body to assume a yellowish tinge associated with jaundice. Stercobilins within the feces produce the typical brown color associated with this waste. And the yellow of urine is associated with the urobilins.

The erythrocyte lifecycle is summarized in Figure 3

Erythrocyte Lifecycle Erythrocytes are produced in the bone marrow and sent into the circulation. At the end of their lifecycle, they are destroyed by macrophages, and their components are recycled.

The size, shape, and number of erythrocytes, and the number of hemoglobin molecules can have a major impact on a person’s health. When the number of RBCs or hemoglobin is deficient, the general condition is called anemia. There are more than 400 types of anemia and more than 3.5 million Americans suffer from this condition. Anemia can be broken down into three major groups:

The effects of the anemia are widespread, because reduced numbers of RBCs or hemoglobin will result in lower levels of oxygen being delivered to body tissues. Since oxygen is required for tissue functioning, anemia produces fatigue, lethargy, and an increased risk for infection. An oxygen deficit in the brain impairs the ability to think clearly, and may prompt headaches and irritability. Lack of oxygen leaves the patient short of breath, even as the heart and lungs work harder in response to the deficit.

Blood loss anemias are fairly straightforward. In addition to bleeding from wounds or other lesions, these forms of anemia may be due to ulcers, hemorrhoids, inflammation of the stomach (gastritis), and some cancers of the gastrointestinal tract. The excessive use of aspirin or other nonsteroidal anti-inflammatory drugs such as ibuprofen can trigger ulceration and gastritis. Excessive menstruation and loss of blood during childbirth are also potential causes.

In contrast to anemia, an elevated RBC count is called polycythemia and is detected in a patient’s elevated hematocrit. It can occur transiently in a person who is dehydrated; when water intake is inadequate or water losses are excessive, the plasma volume falls. As a result, the hematocrit rises. For reasons mentioned earlier, a mild form of polycythemia is chronic but normal in people living at high altitudes. Some elite athletes train at high elevations specifically to induce this phenomenon. Finally, a type of bone marrow disease called polycythemia vera (from the Greek vera = “true”) causes an excessive production of immature erythrocytes. Polycythemia vera can dangerously elevate the viscosity of blood, raising blood pressure and making it more difficult for the heart to pump blood throughout the body. It is a relatively rare disease that occurs more often in men than women, and is more likely to be present in elderly patients those over 60 years of age.