The leukocyte, commonly known as a white blood cell (or WBC), is a major component of the body’s defenses against disease. Leukocytes protect the body against invading microorganisms and body cells with mutated DNA, and they clean up debris. Platelets are essential for the repair of blood vessels when damage to them has occurred; they also provide growth factors for healing and repair.

When scientists first began to observe stained blood slides, it quickly became evident that leukocytes could be divided into two groups, according to whether their cytoplasm contained highly visible granules:

Although leukocytes and erythrocytes both originate from hematopoietic stem cells in the bone marrow, they are very different from each other in many significant ways. For instance, leukocytes are far less numerous than erythrocytes: Typically there are only 5000 to 10,000 per µL. They are also larger than erythrocytes and are the only formed elements that are complete cells, possessing a nucleus and organelles. And although there is just one type of erythrocyte, there are many types of leukocytes. Most of these types have a much shorter lifespan than that of erythrocytes, some as short as a few days or hours or even a few minutes in the case of acute infection.

One of the most distinctive characteristics of leukocytes is their movement. Whereas erythrocytes spend their days circulating within the blood vessels, leukocytes routinely leave the bloodstream to perform their defensive functions in the body’s tissues. For leukocytes, the vascular network is simply a highway they travel and soon exit to reach their true destination. When they arrive, they are often given distinct names, such as macrophage or microglia, depending on their function. They leave the capillaries—the smallest blood vessels—or other small vessels through a process known as emigration (from the Latin for “removal”) or diapedesis(dia- = “through”; -pedan = “to leap”) in which they squeeze through adjacent cells in a blood vessel wall.

Once they have exited the capillaries, some leukocytes will take up fixed positions in lymphatic tissue, bone marrow, the spleen, the thymus, or other organs. Others will move about through the tissue spaces very much like amoebas, continuously extending their plasma membranes, sometimes wandering freely, and sometimes moving toward the direction in which they are drawn by chemical signals. This attracting of leukocytes occurs because of positive chemotaxis(literally “movement in response to chemicals”), a phenomenon in which injured or infected cells and nearby leukocytes emit the equivalent of a chemical “911” call, attracting more leukocytes to the site. In clinical medicine, the differential counts of the types and percentages of leukocytes present are often key indicators in making a diagnosis and selecting a treatment.

Figure 2: Leukocytes exit the blood vessel and then move through the connective tissue of the dermis toward the site of a wound. Some leukocytes, such as the eosinophil and neutrophil, are characterized as granular leukocytes. They release chemicals from their granules that destroy pathogens; they are also capable of phagocytosis. The monocyte, an agranular leukocyte, differentiates into a macrophage that then phagocytizes the pathogens. 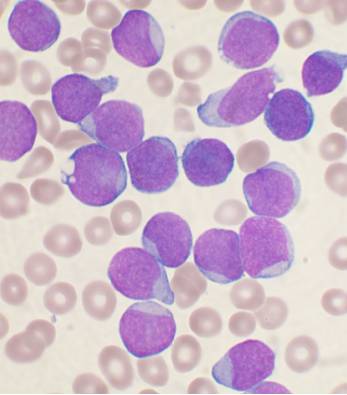 Leukopenia is a condition in which too few leukocytes are produced. If this condition is pronounced, the individual may be unable to ward off disease. Excessive leukocyte proliferation is known as leukocytosis. Although leukocyte counts are high, the cells themselves are often nonfunctional, leaving the individual at increased risk for disease.

Lymphoma is a form of cancer in which masses of malignant T and/or B lymphocytes collect in lymph nodes, the spleen, the liver, and other tissues. As in leukemia, the malignant leukocytes do not function properly, and the patient is vulnerable to infection. Some forms of lymphoma tend to progress slowly and respond well to treatment. Others tend to progress quickly and require aggressive treatment, without which they are rapidly fatal. 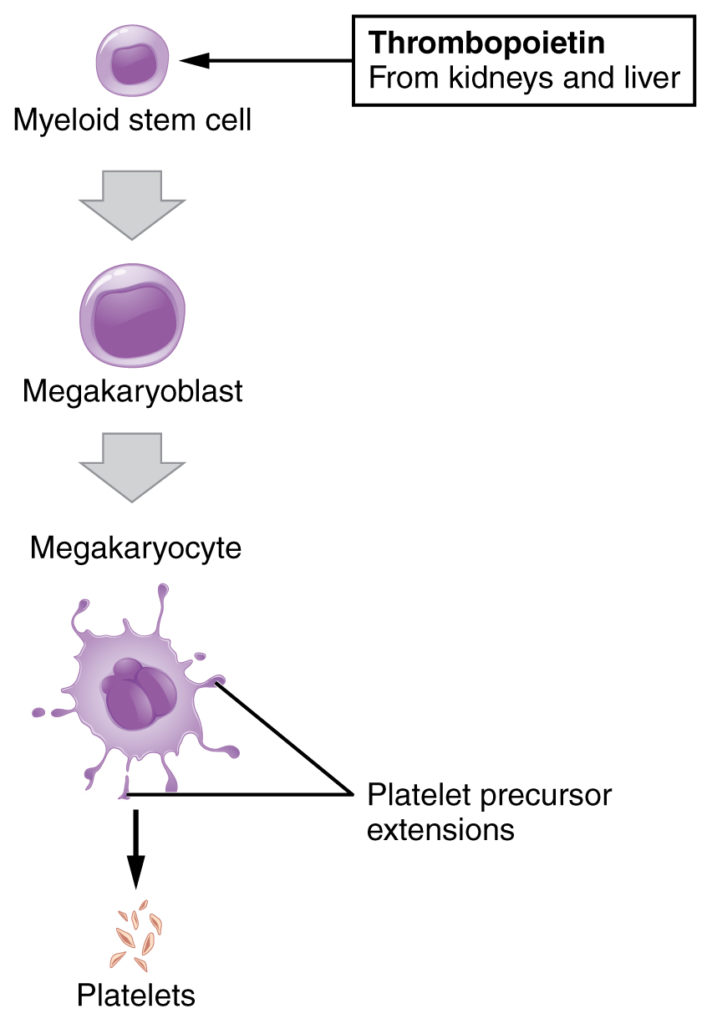 You may occasionally see platelets referred to as thrombocytes, but because this name suggests they are a type of cell, it is not accurate. A platelet is not a cell but rather a fragment of the cytoplasm of a cell called a megakaryocyte that is surrounded by a plasma membrane. Megakaryocytes are descended from myeloid stem cells and are large, typically 50–100 µm in diameter, and contain an enlarged, lobed nucleus. As noted earlier, thrombopoietin, a glycoprotein secreted by the kidneys and liver, stimulates the proliferation of megakaryoblasts, which mature into megakaryocytes. These remain within bone marrow tissue and ultimately form platelet-precursor extensions that extend through the walls of bone marrow capillaries to release into the circulation thousands of cytoplasmic fragments, each enclosed by a bit of plasma membrane. These enclosed fragments are platelets. Each megakarocyte releases 2000–3000 platelets during its lifespan. Following platelet release, megakaryocyte remnants, which are little more than a cell nucleus, are consumed by macrophages.

Platelets are relatively small, 2–4 µm in diameter, but numerous, with typically 150,000–160,000 per µL of blood. After entering the circulation, approximately one-third migrate to the spleen for storage for later release in response to any rupture in a blood vessel. They then become activated to perform their primary function, which is to limit blood loss. Platelets remain only about 10 days, then are phagocytized by macrophages.

Platelets are critical to hemostasis, the stoppage of blood flow following damage to a vessel. They also secrete a variety of growth factors essential for growth and repair of tissue, particularly connective tissue. Infusions of concentrated platelets are now being used in some therapies to stimulate healing.

Blood must clot to heal wounds and prevent excess blood loss. Small cell fragments called platelets (thrombocytes) are attracted to the wound site where they adhere by extending many projections and releasing their contents. These contents activate other platelets and also interact with other coagulation factors, which convert fibrinogen, a water-soluble protein present in blood serum into fibrin (a non-water soluble protein), causing the blood to clot. Many of the clotting factors require vitamin K to work, and vitamin K deficiency can lead to problems with blood clotting. Many platelets converge and stick together at the wound site forming a platelet plug (also called a fibrin clot), as illustrated in Figure 5b. The plug or clot lasts for a number of days and stops the loss of blood. Platelets are formed from the disintegration of larger cells called megakaryocytes, like that shown in Figure 5a. For each megakaryocyte, 2000–3000 platelets are formed with 150,000 to 400,000 platelets present in each cubic millimeter of blood. Each platelet is disc shaped and 2–4 μm in diameter. They contain many small vesicles but do not contain a nucleus. 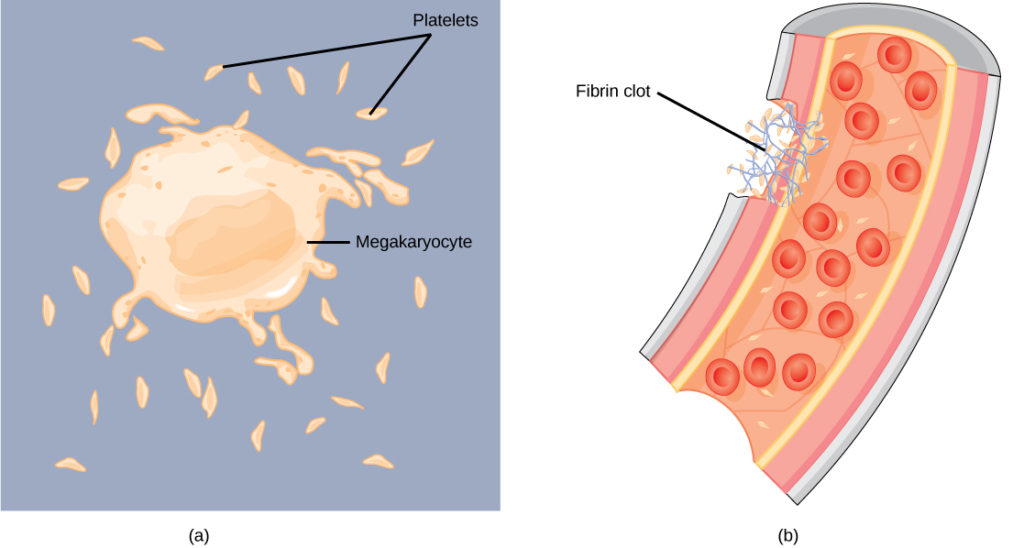 Figure 5 : (a) Platelets are formed from large cells called megakaryocytes. The megakaryocyte breaks up into thousands of fragments that become platelets. (b) Platelets are required for clotting of the blood. The platelets collect at a wound site in conjunction with other clotting factors, such as fibrinogen, to form a fibrin clot that prevents blood loss and allows the wound to heal.

Thrombocytosis is a condition in which there are too many platelets. This may trigger formation of unwanted blood clots (thrombosis), a potentially fatal disorder. If there is an insufficient number of platelets, called thrombocytopenia, blood may not clot properly, and excessive bleeding may result.