As you will recall, a developing human is called a fetus from the ninth week of gestation until birth. This 30-week period of development is marked by continued cell growth and differentiation, which fully develop the structures and functions of the immature organ systems formed during the embryonic period. The completion of fetal development results in a newborn who, although still immature in many ways, is capable of survival outside the womb.

Sexual differentiation does not begin until the fetal period, during weeks 9–12. Embryonic males and females, though genetically distinguishable, are morphologically identical. Bipotential gonads, or gonads that can develop into male or female sexual organs, are connected to a central cavity called the cloaca via Müllerian ducts and Wolffian ducts. (The cloaca is an extension of the primitive gut.) Several events lead to sexual differentiation during this period.

During male fetal development, the bipotential gonads become the testes and associated epididymis. The Müllerian ducts degenerate. The Wolffian ducts become the vas deferens, and the cloaca becomes the urethra and rectum.

During female fetal development, the bipotential gonads develop into ovaries. The Wolffian ducts degenerate. The Müllerian ducts become the uterine tubes and uterus, and the cloaca divides and develops into a vagina, a urethra, and a rectum. 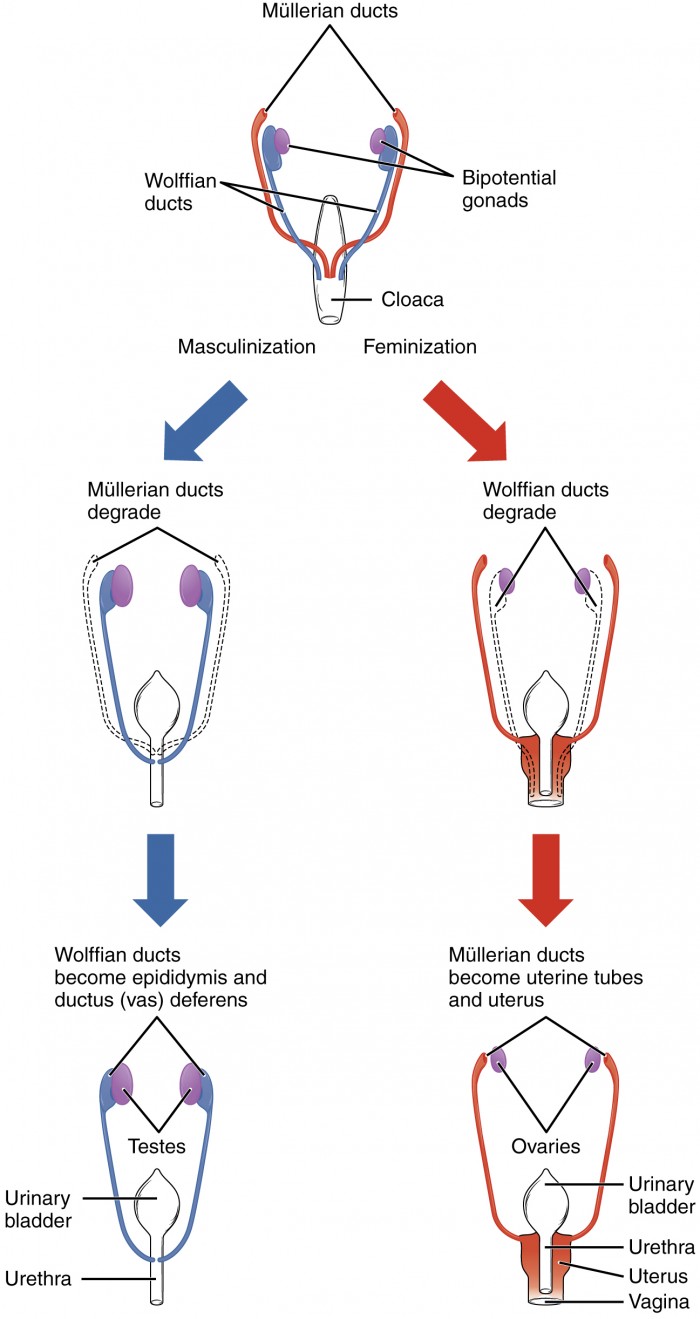 Figure 1. Click for a larger image. Differentiation of the male and female reproductive systems does not occur until the fetal period of development.

During prenatal development, the fetal circulatory system is integrated with the placenta via the umbilical cord so that the fetus receives both oxygen and nutrients from the placenta. However, after childbirth, the umbilical cord is severed, and the newborn’s circulatory system must be reconfigured. When the heart first forms in the embryo, it exists as two parallel tubes derived from mesoderm and lined with endothelium, which then fuse together. As the embryo develops into a fetus, the tube-shaped heart folds and further differentiates into the four chambers present in a mature heart. Unlike a mature cardiovascular system, however, the fetal cardiovascular system also includes circulatory shortcuts, or shunts. A shunt is an anatomical (or sometimes surgical) diversion that allows blood flow to bypass immature organs such as the lungs and liver until childbirth.

The placenta provides the fetus with necessary oxygen and nutrients via the umbilical vein. (Remember that veins carry blood toward the heart. In this case, the blood flowing to the fetal heart is oxygenated because it comes from the placenta. The respiratory system is immature and cannot yet oxygenate blood on its own.) From the umbilical vein, the oxygenated blood flows toward the inferior vena cava, all but bypassing the immature liver, via the ductus venosus shunt. The liver receives just a trickle of blood, which is all that it needs in its immature, semifunctional state. Blood flows from the inferior vena cava to the right atrium, mixing with fetal venous blood along the way.

Although the fetal liver is semifunctional, the fetal lungs are nonfunctional. The fetal circulation therefore bypasses the lungs by shifting some of the blood through the foramen ovale, a shunt that directly connects the right and left atria and avoids the pulmonary trunk altogether. Most of the rest of the blood is pumped to the right ventricle, and from there, into the pulmonary trunk, which splits into pulmonary arteries. However, a shunt within the pulmonary artery, the ductus arteriosus, diverts a portion of this blood into the aorta. This ensures that only a small volume of oxygenated blood passes through the immature pulmonary circuit, which has only minor metabolic requirements. Blood vessels of uninflated lungs have high resistance to flow, a condition that encourages blood to flow to the aorta, which presents much lower resistance. The oxygenated blood moves through the foramen ovale into the left atrium, where it mixes with the now deoxygenated blood returning from the pulmonary circuit. This blood then moves into the left ventricle, where it is pumped into the aorta. Some of this blood moves through the coronary arteries into the myocardium, and some moves through the carotid arteries to the brain.

The descending aorta carries partially oxygenated and partially deoxygenated blood into the lower regions of the body. It eventually passes into the umbilical arteries through branches of the internal iliac arteries. The deoxygenated blood collects waste as it circulates through the fetal body and returns to the umbilical cord. Thus, the two umbilical arteries carry blood low in oxygen and high in carbon dioxide and fetal wastes. This blood is filtered through the placenta, where wastes diffuse into the maternal circulation. Oxygen and nutrients from the mother diffuse into the placenta and from there into the fetal blood, and the process repeats. 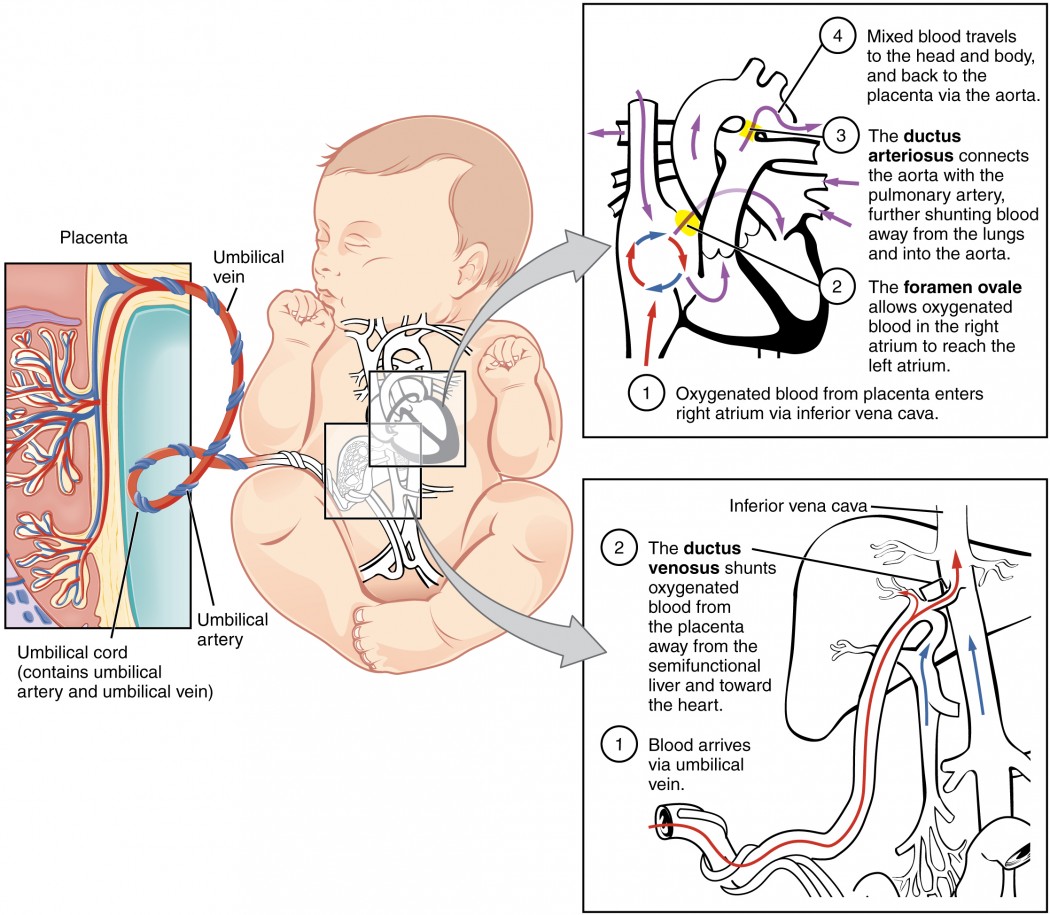 Figure 2. Click for a larger image. The fetal circulatory system includes three shunts to divert blood from undeveloped and partially functioning organs, as well as blood supply to and from the placenta.

Disorders of the Developing Fetus

Throughout the second half of gestation, the fetal intestines accumulate a tarry, greenish black meconium. The newborn’s first stools consist almost entirely of meconium; they later transition to seedy yellow stools or slightly formed tan stools as meconium is cleared and replaced with digested breast milk or formula, respectively. Unlike these later stools, meconium is sterile; it is devoid of bacteria because the fetus is in a sterile environment and has not consumed any breast milk or formula. Typically, an infant does not pass meconium until after birth. However, in 5–20 percent of births, the fetus has a bowel movement in utero, which can cause major complications in the newborn.

The passage of meconium in the uterus signals fetal distress, particularly fetal hypoxia (i.e., oxygen deprivation). This may be caused by maternal drug abuse (especially tobacco or cocaine), maternal hypertension, depletion of amniotic fluid, long labor or difficult birth, or a defect in the placenta that prevents it from delivering adequate oxygen to the fetus. Meconium passage is typically a complication of full-term or post-term newborns because it is rarely passed before 34 weeks of gestation, when the gastrointestinal system has matured and is appropriately controlled by nervous system stimuli. Fetal distress can stimulate the vagus nerve to trigger gastrointestinal peristalsis and relaxation of the anal sphincter. Notably, fetal hypoxic stress also induces a gasping reflex, increasing the likelihood that meconium will be inhaled into the fetal lungs.

Although meconium is a sterile substance, it interferes with the antibiotic properties of the amniotic fluid and makes the newborn and mother more vulnerable to bacterial infections at birth and during the perinatal period. Specifically, inflammation of the fetal membranes, inflammation of the uterine lining, or neonatal sepsis (infection in the newborn) may occur. Meconium also irritates delicate fetal skin and can cause a rash.

The first sign that a fetus has passed meconium usually does not come until childbirth, when the amniotic sac ruptures. Normal amniotic fluid is clear and watery, but amniotic fluid in which meconium has been passed is stained greenish or yellowish. Antibiotics given to the mother may reduce the incidence of maternal bacterial infections, but it is critical that meconium is aspirated from the newborn before the first breath. Under these conditions, an obstetrician will extensively aspirate the infant’s airways as soon as the head is delivered, while the rest of the infant’s body is still inside the birth canal.

Aspiration of meconium with the first breath can result in labored breathing, a barrel-shaped chest, or a low Apgar score. An obstetrician can identify meconium aspiration by listening to the lungs with a stethoscope for a coarse rattling sound. Blood gas tests and chest X-rays of the infant can confirm meconium aspiration. Inhaled meconium after birth could obstruct a newborn’s airways leading to alveolar collapse, interfere with surfactant function by stripping it from the lungs, or cause pulmonary inflammation or hypertension. Any of these complications will make the newborn much more vulnerable to pulmonary infection, including pneumonia.