Processes of Digestion and Absorption.

Food is the body’s source of fuel. The nutrients in food give the body’s cells the energy they need to operate. Before food can be used it has to be mechanically broken down into tiny pieces, then chemically broken down so nutrients can be absorbed. In humans, proteins need to be broken down into amino acids, starches into sugars, and fats into fatty acids and glycerol. This mechanical and chemical breakdown encompasses the process of digestion. 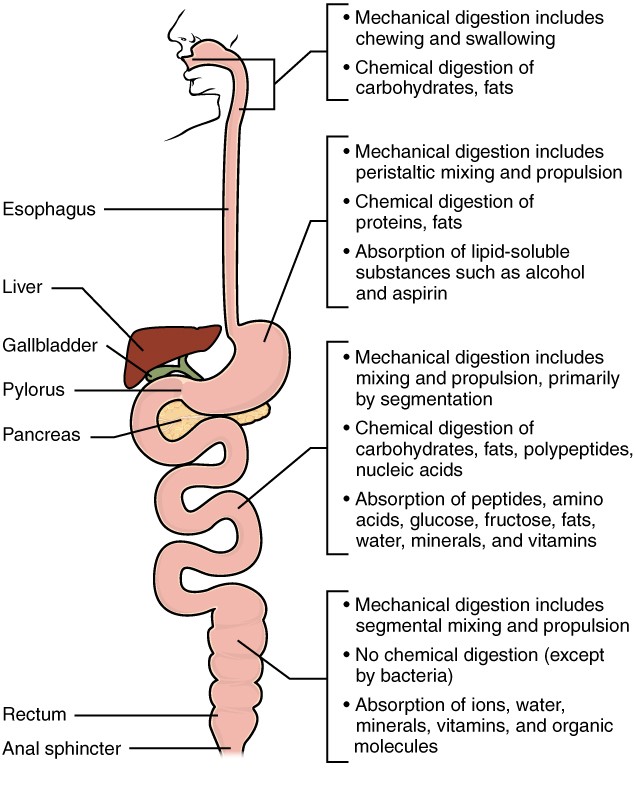 Mechanical digestion is a purely physical process that does not change the chemical nature of the food. Instead, it makes the food smaller to increase both surface area and mobility. It includes mastication, or chewing, as well as tongue movements that help break food into smaller bits and mix food with saliva.

Although there may be a tendency to think that mechanical digestion is limited to the first steps of the digestive process, it occurs after the food leaves the mouth, as well in the stomach and intestine by peristalsis and segmentation. Peristalsis is a series of wave-like muscle contractions that moves food to different processing stations in the digestive tract. Peristalsis in the esophagus propel the food bolus down to the stomach.  When food enters the stomach, a highly muscular organ, powerful peristaltic contractions help mash, pulverize, and churn food into chyme. Chyme is a semiliquid mass of partially digested food that also contains gastric juices secreted by cells in the stomach.  The mechanical churning of food in the stomach serves to further break it apart and expose more of its surface area to digestive juices.  Vomiting is a reverse peristaltic action of the stomach. The vomiting center in the brain (medulla oblongata) is sensitive to stimuli such as toxins and rapid body movements. The vomiting center also receives cortical input so certain thoughts can cause vomiting.  Segmentation occurs mainly in the small intestine, it is caused by localized contractions of circular muscle of the muscularis layer of the alimentary canal. These contractions isolate small sections of the intestine, moving their contents back and forth while continuously subdividing, breaking up, and mixing the contents. By moving food back and forth in the intestinal lumen, segmentation mixes food with digestive juices and facilitates absorption.

Large food molecules (for example, proteins, lipids, nucleic acids, and starches) must be broken down into subunits that are small enough to be absorbed by the lining of the alimentary canal. This is accomplished by enzymes through hydrolysis.  Chemical digestion breaks large food molecules down into their chemical building blocks, which can then be absorbed through the intestinal wall and into the general circulation

Figure 2: The steps in carbohydrate digestion Digestion of carbohydrates is performed by several enzymes. Starch and glycogen are broken down into glucose by amylase and maltase. Sucrose (table sugar) and lactose (milk sugar) are broken down by sucrase and lactase, respectively.

Lactose intolerance is a condition characterized by indigestion caused by dairy products. It occurs when the absorptive cells of the small intestine do not produce enough lactase, the enzyme that digests the milk sugar lactose. In most mammals, lactose intolerance increases with age. In contrast, some human populations, most notably Caucasians, are able to maintain the ability to produce lactase as adults.

In people with lactose intolerance, the lactose in chyme is not digested. Bacteria in the large intestine ferment the undigested lactose, a process that produces gas. In addition to gas, symptoms include abdominal cramps, bloating, and diarrhea. Symptom severity ranges from mild discomfort to severe pain; however, symptoms resolve once the lactose is eliminated in feces.

The hydrogen breath test is used to help diagnose lactose intolerance. Lactose-tolerant people have very little hydrogen in their breath. Those with lactose intolerance exhale hydrogen, which is one of the gases produced by the bacterial fermentation of lactose in the colon. After the hydrogen is absorbed from the intestine, it is transported through blood vessels into the lungs. There are a number of lactose-free dairy products available in grocery stores. In addition, dietary supplements are available. Taken with food, they provide lactase to help digest lactose.

Some carbohydrates, such as cellulose, are not digested at all, despite being made of multiple glucose units. This is because the cellulose is made out of beta-glucose that makes the inter-monosaccharidal bindings different from the ones present in starch, which consists of alpha-glucose. Humans lack the enzyme for splitting the beta-glucose-bonds—that is reserved for herbivores and bacteria in the large intestine. Through the process of saccharolytic fermentation, bacteria break down some of the remaining carbohydrates in the large intestine . This results in the discharge of hydrogen, carbon dioxide, and methane gases that create flatus (gas) in the colon; flatulence is excessive flatus. Each day, up to 1500 mL of flatus is produced in the colon. More is produced when you eat foods such as beans, which are rich in otherwise indigestible sugars and complex carbohydrates like soluble dietary fiber.

Proteins are polymers composed of amino acids linked by peptide bonds to form long chains. Digestion reduces them to their constituent amino acids. The digestion of protein starts in the stomach, where HCl and pepsin break proteins into smaller polypeptides, which then travel to the small intestine. Chemical digestion in the small intestine is continued by pancreatic enzymes, including chymotrypsin and trypsin, each of which act on specific bonds in amino acid sequences.. This results in molecules small enough to enter the bloodstream. 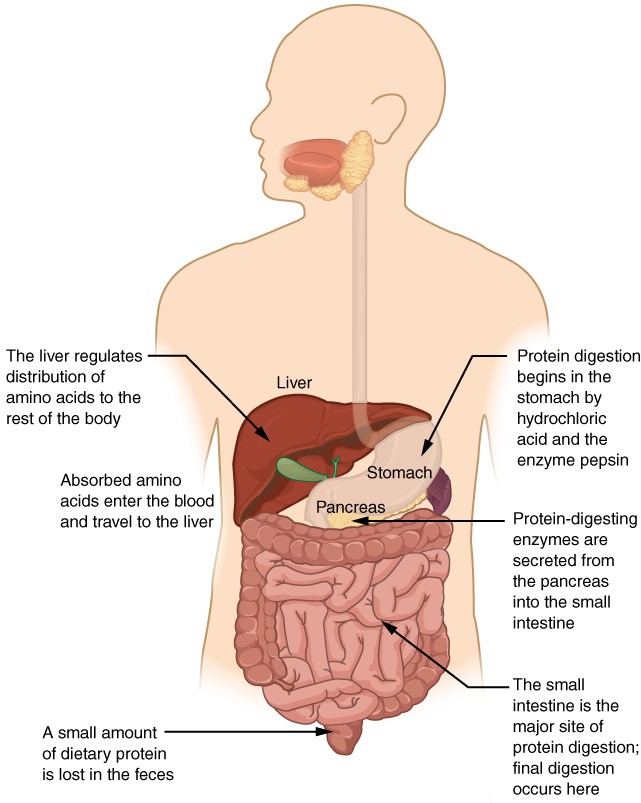 Figure 3. The digestion of protein begins in the stomach and is completed in the small intestine.

Figure 4. Proteins are successively broken down into their amino acid components.

Bile salts attach to triglycerides and help to emulsify them; this aids access by pancreatic lipase because the lipase is water-soluble, but the fatty triglycerides are hydrophobic and tend to orient toward each other and away from the watery intestinal surroundings.

The bile salts act to hold the triglycerides in their watery surroundings until the lipase can break them into the smaller components that are able to enter the villi for absorption.

The nucleic acids DNA and RNA are found in most of the foods you eat. Pancreatic nuclease are responsible for their digestion: deoxyribonuclease, which digests DNA, and ribonuclease, which digests RNA. The nucleotides produced by this digestion are further broken down by two intestinal brush border enzymes (nucleosidase and phosphatase) into pentoses, phosphates, and nitrogenous bases, which can be absorbed through the alimentary canal wall.

The mechanical and digestive processes have one goal: to convert food into molecules small enough to be absorbed by the epithelial cells of the intestinal villi. The absorptive capacity of the alimentary canal is almost endless. Each day, the alimentary canal processes up to 10 liters of food, liquids, and GI secretions, yet less than one liter enters the large intestine. Almost all ingested food, 80 percent of electrolytes, and 90 percent of water are absorbed in the small intestine. Although the entire small intestine is involved in the absorption of water and lipids, most absorption of carbohydrates and proteins occurs in the jejunum. Notably, bile salts and vitamin B12 are absorbed in the terminal ileum. By the time chyme passes from the ileum into the large intestine, it is essentially indigestible food residue (mainly plant fibers like cellulose), some water, and millions of bacteria.

In general, all minerals that enter the intestine are absorbed, whether you need them or not. Iron and calcium are exceptions; they are absorbed in the duodenum in amounts that meet the body’s current requirements. ,

Each day, about nine liters of fluid enter the small intestine. About 2.3 liters are ingested in foods and beverages, and the rest is from GI secretions. About 90 percent of this water is absorbed in the small intestine. Water absorption is driven by the concentration gradient of the water: The concentration of water is higher in chyme than it is in epithelial cells. Thus, water moves down its concentration gradient from the chyme into cells. As noted earlier, much of the remaining water is then absorbed in the colon.