Bacterial vaginosis (BV), a common cause of vaginal discharge in women of childbearing age, is a polymicrobial clinical syndrome resulting from a change in the vaginal community of bacteria. Although BV is often not considered an STD, it has been linked to sexual activity. Women may have no symptoms or may complain of a foul-smelling, fishy, vaginal discharge.

Chlamydia is a common sexually transmitted disease (STD) caused by infection with Chlamydia trachomatis. It can cause cervicitis in women and urethritis and proctitis in both men and women. Chlamydial infections in women can lead to serious consequences including pelvic inflammatory disease (PID), tubal factor infertility, ectopic pregnancy, and chronic pelvic pain. Lymphogranuloma venereum (LGV), another type of STD caused by different serovars of the same bacterium, occurs commonly in the developing world, and has more recently emerged as a cause of outbreaks of proctitis among men who have sex with men (MSM) worldwide.1,2

Gonorrhea is a sexually transmitted disease (STD) that can infect both men and women. It can cause infections in the genitals, rectum, and throat. It is a very common infection, especially among young people ages 15-24 years.

Human Papillomavirus (HPV) is the most common sexually transmitted infection (STI). HPV is a different virus than HIV and HSV (herpes). 79 million Americans, most in their late teens and early 20s, are infected with HPV. There are many different types of HPV. Some types can cause health problems including genital warts and cancers. But there are vaccines that can stop these health problems from happening.

Syphilis is a sexually transmitted infection that can cause serious health problems if it is not treated. Syphilis is divided into stages (primary, secondary, latent, and tertiary), with different signs and symptoms associated with each stage. A person with primary syphilis generally has a sore or sores at the original site of infection. These sores usually occur on or around the genitals, around the anus or in the rectum, or in or around the mouth. These sores are usually (but not always) firm, round, and painless. Symptoms of secondary syphilis include skin rash, swollen lymph nodes, and fever. The signs and symptoms of primary and secondary syphilis can be mild, and they might not be noticed. During the latent stage, there are no signs or symptoms. Tertiary syphilis is associated with severe medical problems.  A doctor can usually diagnose tertiary syphilis with the help of multiple tests. It can affect the heart, brain, and other organs of the body.

Trichomoniasis (or “trich”) is a very common sexually transmitted disease (STD). It is caused by infection with a protozoan parasite called Trichomonas vaginalis. Although symptoms of the disease vary, most people who have the parasite cannot tell they are infected.T richomoniasis is the most common curable STD. In the United States, an estimated 3.7 million people have the infection. However, only about 30% develop any symptoms of trichomoniasis. Infection is more common in women than in men. Older women are more likely than younger women to have been infected with trichomoniasis. 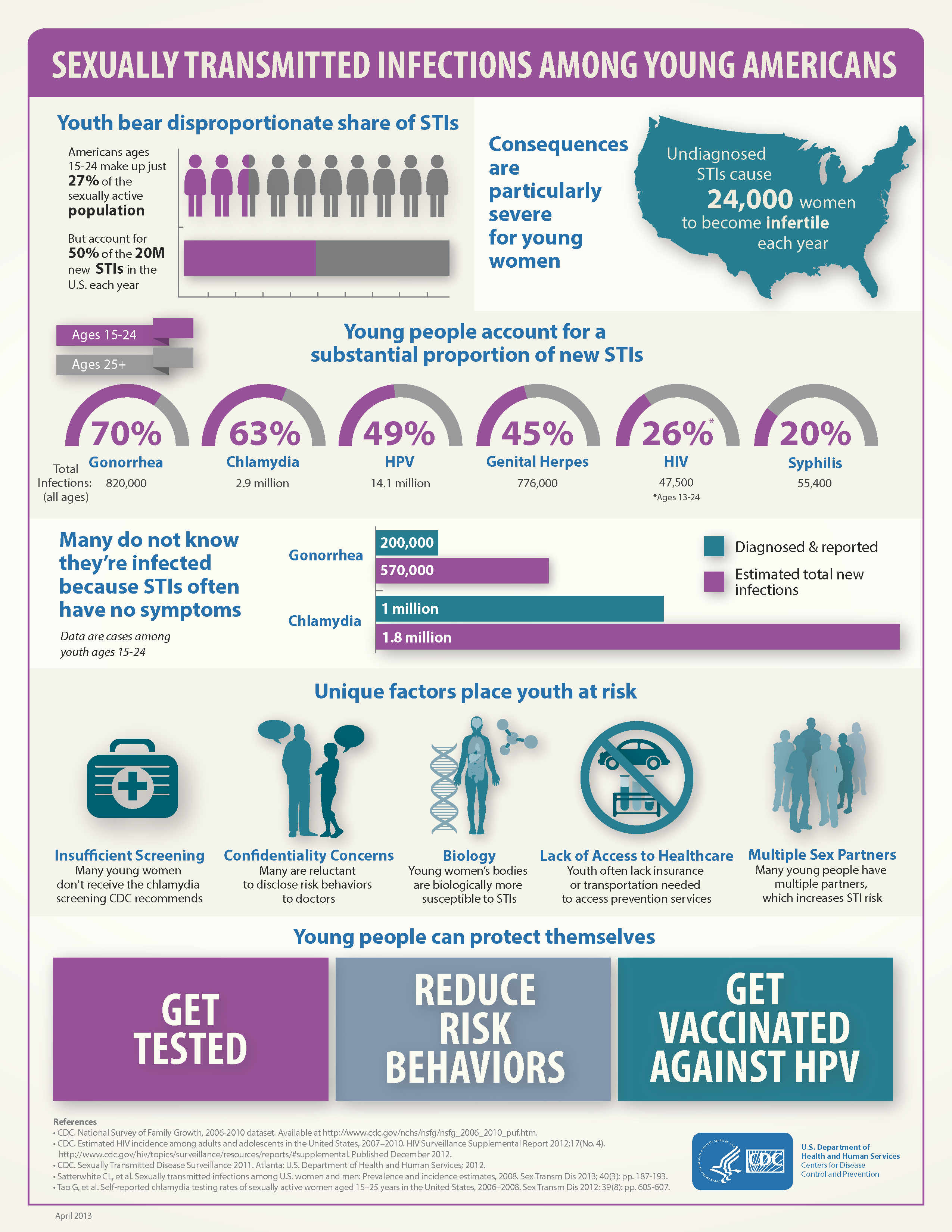