The Adaptive Immune Response: T lymphocytes and Their Functional Types

The Benefits of the Adaptive Immune Response

The specificity of the adaptive immune response—its ability to specifically recognize and make a response against a wide variety of pathogens—is its great strength. Antigens, the small chemical groups often associated with pathogens, are recognized by receptors on the surface of B and T lymphocytes. The adaptive immune response to these antigens is so versatile that it can respond to nearly any pathogen. This increase in specificity comes because the adaptive immune response has a unique way to develop as many as 100 trillion different receptors to recognize nearly every conceivable pathogen. How could so many different types of antibodies be encoded? And what about the many specificities of T cells? There is not nearly enough DNA in a cell to have a separate gene for each specificity. The mechanism was finally worked out in the 1970s and 1980s using the new tools of molecular genetics

The immune system’s first exposure to a pathogen is called a primary adaptive response. Symptoms of a first infection, called primary disease, are always relatively severe because it takes time for an initial adaptive immune response to a pathogen to become effective.

Upon re-exposure to the same pathogen, a secondary adaptive immune response is generated, which is stronger and faster than the primary response. The secondary adaptive response often eliminates a pathogen before it can cause significant tissue damage or any symptoms. Without symptoms, there is no disease, and the individual is not even aware of the infection. This secondary response is the basis of immunological memory, which protects us from getting diseases repeatedly from the same pathogen. By this mechanism, an individual’s exposure to pathogens early in life spares the person from these diseases later in life.

A third important feature of the adaptive immune response is its ability to distinguish between self-antigens, those that are normally present in the body, and foreign antigens, those that might be on a potential pathogen. As T and B cells mature, there are mechanisms in place that prevent them from recognizing self-antigen, preventing a damaging immune response against the body. These mechanisms are not 100 percent effective, however, and their breakdown leads to autoimmune diseases, which will be discussed later in this chapter. 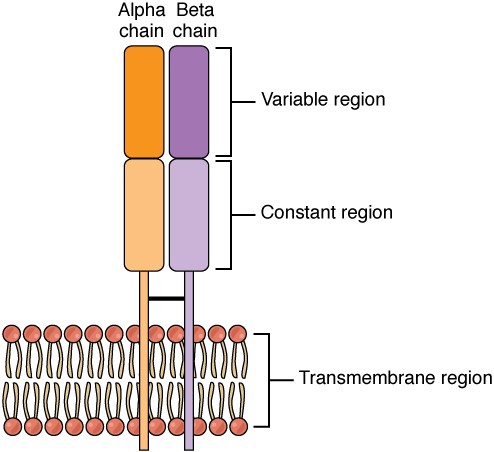 Figure 1. Notice the constant and variable regions of each chain, anchored by the transmembrane region.

T lymphocytes recognize antigens based on a two-chain protein receptor. The most common and important of these are the alpha-beta T cell receptors (Figure 1).

There are two chains in the T cell receptor, and each chain consists of two domains. The variable region domain is furthest away from the T cell membrane and is so named because its amino acid sequence varies between receptors. In contrast, the constant region domain has less variation. The differences in the amino acid sequences of the variable domains are the molecular basis of the diversity of antigens the receptor can recognize. Thus, the antigen-binding site of the receptor consists of the terminal ends of both receptor chains, and the amino acid sequences of those two areas combine to determine its antigenic specificity. Each T cell produces only one type of receptor and thus is specific for a single particular antigen.

Antigens on pathogens are usually large and complex, and consist of many antigenic determinants. An antigenic determinant (epitope) is one of the small regions within an antigen to which a receptor can bind. They usually consist of six or fewer amino acid residues in a protein, or one or two sugar moieties in a carbohydrate antigen. Carbohydrate antigens are found on bacterial cell walls and on red blood cells (the ABO blood group antigens). Protein antigens are complex because of the variety of three-dimensional shapes that proteins can assume, and are especially important for the immune responses to viruses and worm parasites. It is the interaction of the shape of the antigen and the complementary shape of the amino acids of the antigen-binding site that accounts for the chemical basis of specificity. 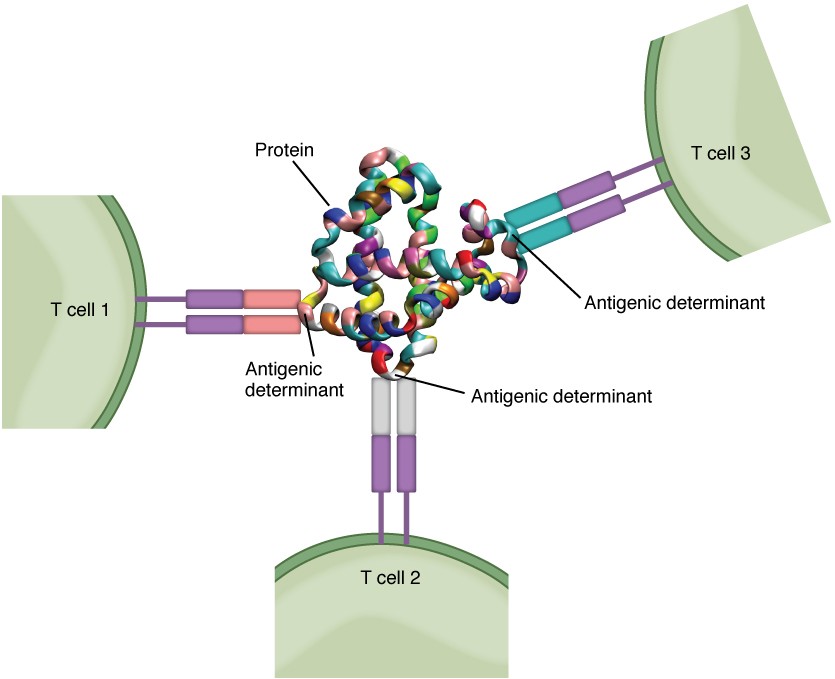 Figure 2. A typical protein antigen has multiple antigenic determinants, shown by the ability of T cells with three different specificities to bind to different parts of the same antigen.

Although Figure 2 shows T cell receptors interacting with antigenic determinants directly, the mechanism that T cells use to recognize antigens is, in reality, much more complex. T cells do not recognize free-floating or cell-bound antigens as they appear on the surface of the pathogen – they only recognize antigen on the surface of specialized cells called antigen-presenting cells (APCs). Antigens are internalized by these antigen-presenting cells.

Antigen processing is a mechanism that enzymatically cleaves the antigen into smaller pieces once it has been internalized. The antigen fragments are then brought to the APC’s surface and associated with a specialized type of antigen-presenting protein known as a major histocompatibility complex (MHC) molecule. The association of the antigen fragments with an MHC molecule on the surface of a cell is known as antigen presentation and results in the recognition of antigen by a T cell. It is the combination of the MHC molecule and the fragment of the original peptide or carbohydrate that is actually physically recognized by the T cell receptor. 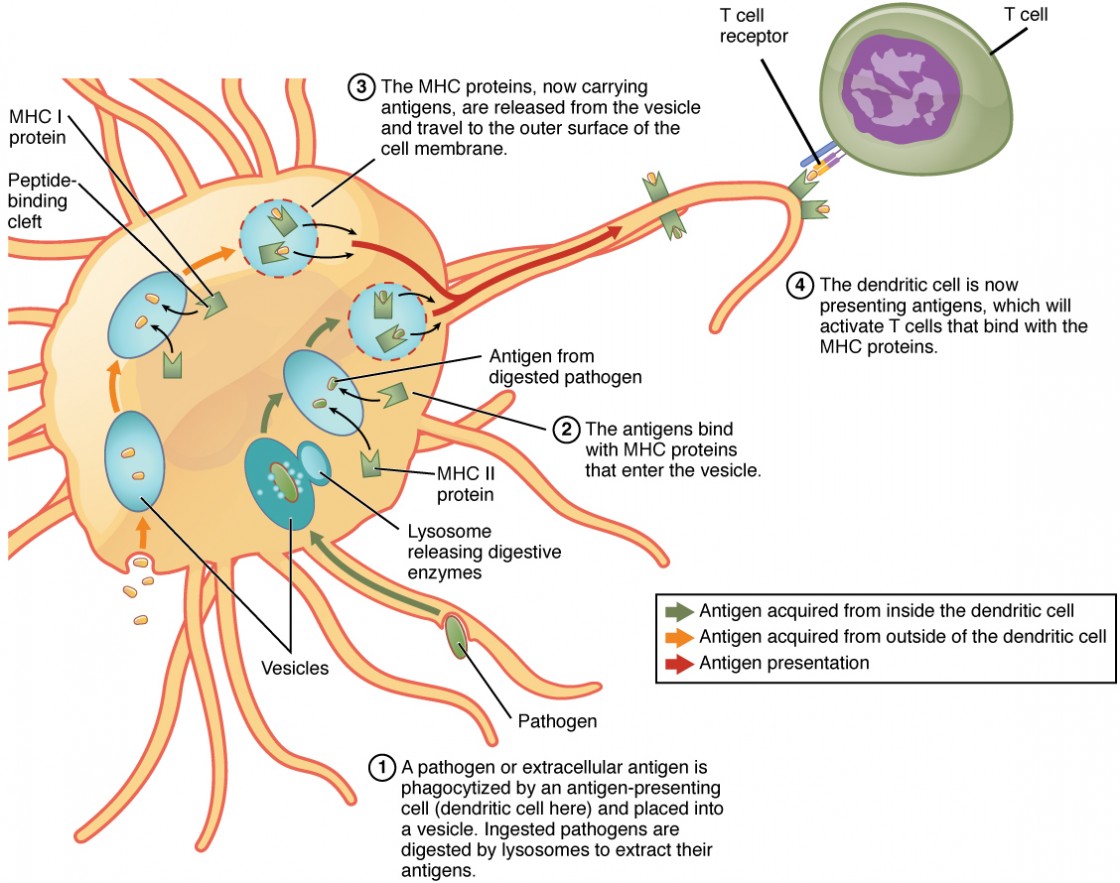 Mature T cells become activated by recognizing processed foreign antigen in association with a self-MHC molecule and begin dividing rapidly by mitosis. This proliferation of T cells is called clonal expansion and is necessary to make the immune response strong enough to effectively control a pathogen. How does the body select only those T cells that are needed against a specific pathogen? Again, the specificity of a T cell is based on the amino acid sequence and the three-dimensional shape of the antigen-binding site formed by the variable regions of the two chains of the T cell receptor. Clonal selection is the process of antigen binding only to those T cells that have receptors specific to that antigen. Each T cell that is activated has a specific receptor “hard-wired” into its DNA, and all of its progeny will have identical DNA and T cell receptors, forming clones of the original T cell. 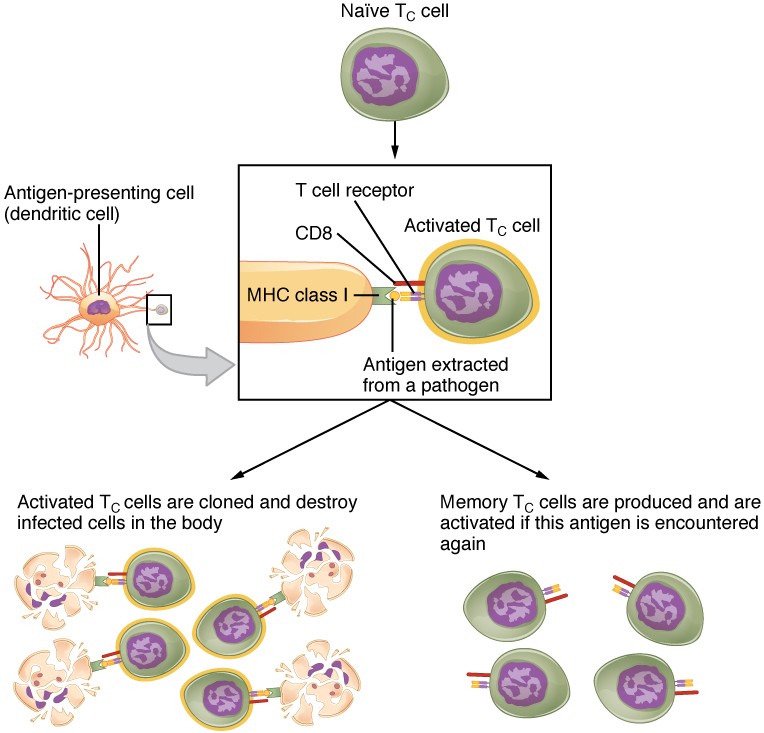 Figure 4. Stem cells differentiate into T cells with specific receptors, called clones. The clones with receptors specific for antigens on the pathogen are selected for and expanded.

Only those clones of lymphocytes whose receptors are activated by the antigen are stimulated to proliferate. Keep in mind that most antigens have multiple antigenic determinants, so a T cell response to a typical antigen involves a polyclonal response. A polyclonal response is the stimulation of multiple T cell clones. Once activated, the selected clones increase in number and make many copies of each cell type, each clone with its unique receptor. By the time this process is complete, the body will have large numbers of specific lymphocytes available to fight the infection.

The Cellular Basis of Immunological Memory

As already discussed, one of the major features of an adaptive immune response is the development of immunological memory.

During a primary adaptive immune response, both memory T cells and effector T cells are generated. Memory T cells are long-lived and can even persist for a lifetime. Memory cells are primed to act rapidly. Thus, any subsequent exposure to the pathogen will elicit a very rapid T cell response. This rapid, secondary adaptive response generates large numbers of effector T cells so fast that the pathogen is often overwhelmed before it can cause any symptoms of disease. This is what is meant by immunity to a disease. The same pattern of primary and secondary immune responses occurs in B cells and the antibody response, as will be discussed later in the chapter.

T Cell Types and their Functions

Mature T cells express cell adhesion molecules (CD4 or CD8) that keep the T cell in close contact with the antigen-presenting cell by directly binding to the MHC molecule (to a different part of the molecule than does the antigen). Thus, T cells and antigen-presenting cells are held together in two ways: by CD4 or CD8 attaching to MHC and by the T cell receptor binding to antigen. 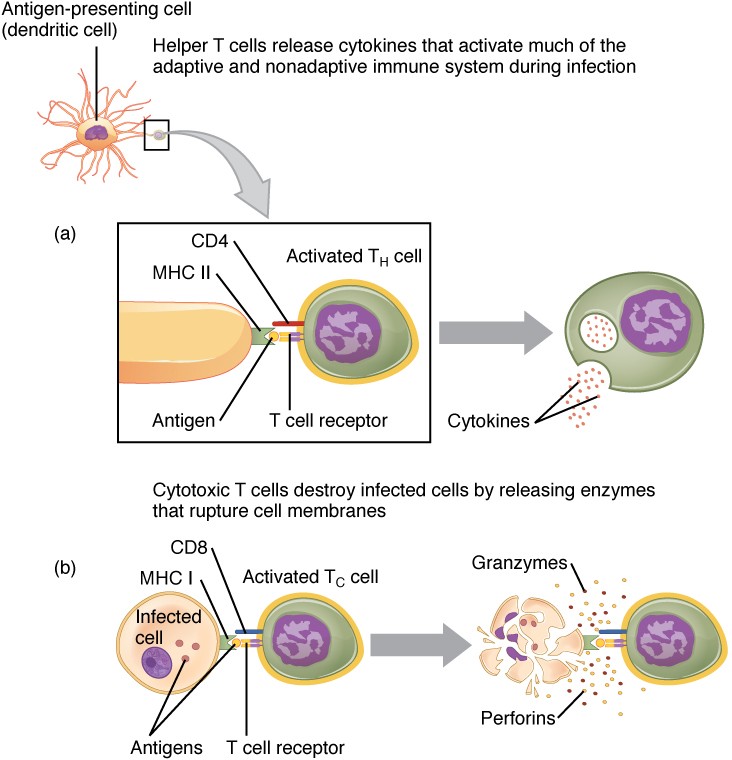 Figure 5. (a) CD4 is associated with helper and regulatory T cells. An extracellular pathogen is processed and presented in the binding cleft of a class II MHC molecule, and this interaction is strengthened by the CD4 molecule. (b) CD8 is associated with cytotoxic T cells. An intracellular pathogen is presented by a class I MHC molecule, and CD8 interacts with it.

Helper T Cells and their Cytokines

Helper T cells (Th) function by secreting cytokines that act to enhance other immune responses. There are two classes of Th cells, and they act on different components of the immune response. These cells are not distinguished by their surface molecules but by the characteristic set of cytokines they secrete.

Cytotoxic T cells (Tc) are T cells that kill target cells by inducing apoptosis using the same mechanism as NK cells. They either express Fas ligand, which binds to the fas molecule on the target cell, or act by using perforins and granzymes contained in their cytoplasmic granules. As was discussed earlier with NK cells, killing a virally infected cell before the virus can complete its replication cycle results in the production of no infectious particles. As more Tc cells are developed during an immune response, they overwhelm the ability of the virus to cause disease. In addition, each Tc cell can kill more than one target cell, making them especially effective.