As you know, magma is molten rock found beneath the Earth’s surface. Sometimes, it appears at the surface of the Earth as lava after moving through a volcano. At other times, magma does not come to the surface, but stays underground. In both cases, the magma eventually solidifies and the resulting rocks and formations are igneous. The rocks that solidify beneath the ground are called intrusive or plutonic rocks, while those that solidify above the surface are called extrusive or volcanic rocks. Extrusive rocks are sometimes small rocks that you can hold in your hand. At other times, entire landforms are created when lava flows onto the surface. Intrusive rocks do not always remain hidden below the surface. They can appear on the surface when rocks that once covered them are eroded away, exposing the intrusive igneous rock. Hot springs and geysers are some more examples of surface features related to igneous rock.

The most obvious landforms created by lava are volcanoes. Volcanoes, of course, are the places where lava comes to the surface. As already discussed, volcanoes come in many forms, most commonly as cinder cones, stratovolcanoes, and shield volcanoes. However, lava can create other notable landforms, as described below.

When lava is fairly viscous, it is thick and flows slowly. Although it might not be so viscous that it causes an explosive eruption, it can create a large sort of round “blob” or a lava dome. Because it is so thick, it does not flow far from the vent from which it came. In fact, lava flows often make mounds right in the middle of craters at the top of volcanoes (Figure 8.27 and Figure 8.28).

Figure 8.27: Lava domes are large, round landforms created by thick lava that does not travel far from the vent. 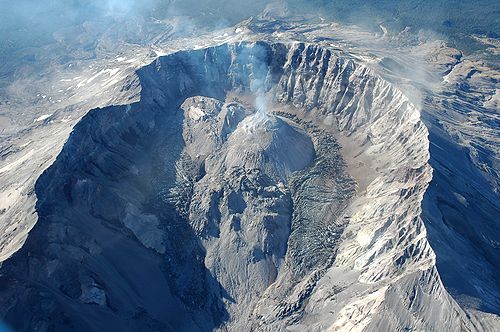 A lava plateau is caused by a large amount of less viscous lava that flows over a large area. When it solidifies, it creates a large, flat surface of igneous rock. Some plateaus are huge, like the Columbia Plateau in Washington, Oregon, and Idaho that covers over 161,000 square kilometers (63,000 square miles).

Of course, not all magma reaches the surface. Sometimes magma stays beneath the ground where it solidifies. These formations are called intrusions (Figure 8.30). Because they form underground, they only become land formations if they arrive at the surface of the Earth. This occurs because of weathering, erosion and plate tectonics. In other words, when tectonic plates collide, they create mountain ranges where one plate is lifted in a subduction zone. This lifting (which occurs at a rate of centimeters per year) and subsequent erosion can eventually uncover intrusive rock formations. As erosion removes the topmost rocks and soil, solidified magma is exposed in the same form in which it cooled and solidified many years before. 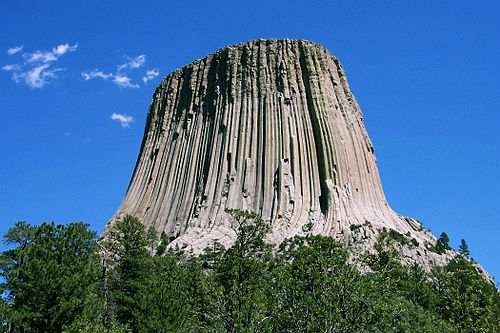 Figure 8.30: Devil’s Tower in Wyoming is a huge rock formation that was once magma that cooled within a volcano. It rises to nearly 400 meters from its base.

Beneath the surface of the Earth, water works its way through porous rocks or soil. Most caves, for example, are results of water’s erosion of the ground. At times, that water crosses paths with volcanic activity. The same heat that melts rock into lava heats the water beneath the surface. If the water makes its way to the surface, it may emerge as either a hot spring or a geyser.

When that water comes to the surface under regular pressure, it creates a hot spring (Figure 8.31). A hot spring is a crack in the Earth through which water reaches the surface, after being heated below the ground. Many people disagree on the exact definition of a hot spring. However, everyone agrees that the water’s temperature is higher than normal. The water in hot springs can even reach temperatures in the hundreds of degrees Celsius beneath the surface. Most hot springs do not reach those great temperatures. In fact, many hot springs are used by people as natural hot tubs. Many people believe that hot springs hold curative properties. Hot springs are found all over the world, even in Antarctica! 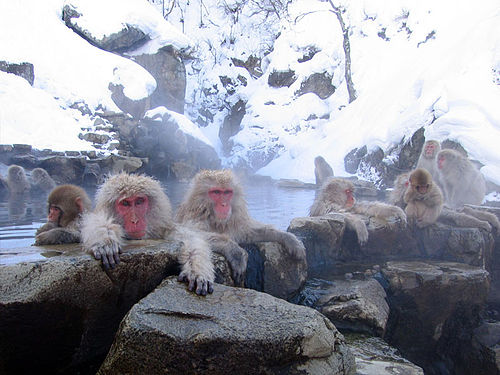 Figure 8.31: Even some animals enjoy relaxing in nature’s hot tubs. 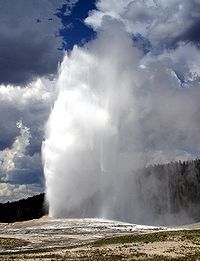 Like hot springs, geysers are created by water that is heated beneath the Earth’s surface. When water is both superheated by magma and flows through a narrow passageway underground, the environment becomes ideal for a geyser. The narrow passageway traps the heated water underground, where heat and pressure continue to build. Sooner or later, the pressure grows so great that the superheated water bursts out onto the surface. This explosion is called a geyser. There are only a few areas in the world where the conditions are right for the formation of geysers. About 1,000 geysers exist worldwide and about half of those are found in the United States of America. Perhaps the most famous geyser is Old Faithful, which erupts every 60 to 70 minutes in a plume of hot water nearly 60 meters in the air. It is rare for a geyser to erupt regularly, which contributes to Old Faithful’s fame (Figure 8.32).

lava dome
A dome-shaped plug of viscous lava that cools near the vent of a volcano.
intrusion
A rock mass formed by magma solidifying underground.
hot spring
A stream of hot water that flows out of the ground continuously.
geyser
A fountain of hot water and steam that shoots into the air at either regular or random intervals. The water in a geyser encounters some sort of constriction underground, which forces pressure to build up in the water, eventually causing the geyser to erupt.