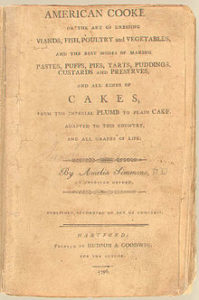 In 1796, Amelia Simmons published a short cookbook entitled American Cookery. The book was aptly named since it is believed to be the first truly American cookbook. Not much is known about Amelia Simmons, although in the introduction she identifies herself simply as “an American orphan.” While a number of her recipes are copied from British cookbooks, Simmons is the first food writer to include a number of indigenous American ingredients and recipes. These include several recipes featuring corn meal (such as “Indian” pudding) in various forms. Perhaps most notable is her inclusion of a recipe for cranberry sauce to complement her roast turkey: the cornerstone of most Thanksgiving feasts ever since. Her longest and most elaborate recipe describes how to prepare terrapin turtles for the table. Her book provides a great deal of insight into the cooking and eating (and, therefore, living) habits of colonial Americans. It includes a great deal of amusing folk wisdom–my favorite is the danger of exposing your fresh caught salmon to the light of the full moon–and strong opinions—only the French could find garlic edible. Note also the wide variety of food discussed in the book (I count at least five kinds of peas). What does that tell us about American eating habits? Also of note is that this is a book written by a woman for women readers.