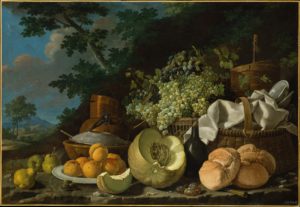 Organized civilization brought with it the idea of cookery: the intentional preparation of foods in the traditional manner of a particular social or ethnic group. Traditions derived both from local factors of climate, soil and fauna, and from religious taboos conveying ideas of cleanliness or of safeguarding the social structure. As civilizations become more sophisticated all over the world, and commercial and cultural exchanges increased, the diet became every more varied and complex. It has been said that civilization occurs when something we never missed before becomes a necessity. From now on food would be a social factor, sometimes even demonstrating social identity, as with the Lotophagi or lotus-eaters of Djerba in the tale of Odysseus. Tastes and culinary skills do in fact reflect a group mentality. Maguelonne Toussaint-Samlat, The History of Food, 2nd Ed. (2009)

People ask me: Why do you write about food, and eating and drinking? Why don’t you write about the struggle for power and security, and about love, the way others do? They ask it accusingly, as if I were somehow gross, unfaithful to the honor of my craft. The easiest answer is to say that, like most other humans, I am hungry. But there is more than that. It seems to me that our three basic needs, for food and security and love, are so mixed and mingled and entwined that we cannot straightly think of one without the others. So it happens that when I write of hunger, I am really writing about love and the hunger for it, and warmth and the love of it and the hunger for it…and then the warmth and richness and fine reality of hunger satisfied…and it is all one. M.F.K. Fisher, The Gastronomical Me (1943)